August 1, 2014 – Last week, Comcast released their second quarter earnings revealing an increase in attendance and profits throughout their U.S parks. Each new quarter seems to be showing just how far the market has changed – tracing all the way back to the start of the decade. In 2010, Universal opened up two huge attractions that uplifted both coasts, with Hollywood opening King Kong 360 3D on the Studio Tour and Universal’s Islands of Adventure opening the Wizarding World of Harry Potter. We will look at how these two attractions changed Universal’s fortunes and propelled their status in the theme park industry.

To look at how far they have come, we must look at the past. In 2008, all four Universal parks were in dire need of a revitalized hit. Universal Studios Florida added two attractions — Disaster: A Major Motion Picture Ride… Starring You and the Simpsons Ride – replacing Earthquake and Back to the Future: The Ride respectively. At the same time, Universal Studios Hollywood also opened up the Simpsons Ride, replacing its own iteration of Back to the Future.

While Universal Studios Florida received a minor .5% bump in attendance, Hollywood saw a decrease of 2.5% – a direct result of the backlot fire that destroyed a significant portion of the metropolitan sets. Islands of Adventure also experienced a decrease in attendance of 2.4%, though that may have been due to the anticipation of the Wizarding World of Harry Potter. Internationally, Universal Studios Japan was also in the midst of a bigger downturn in attendance – losing 4.7% from the previous year in 2008. 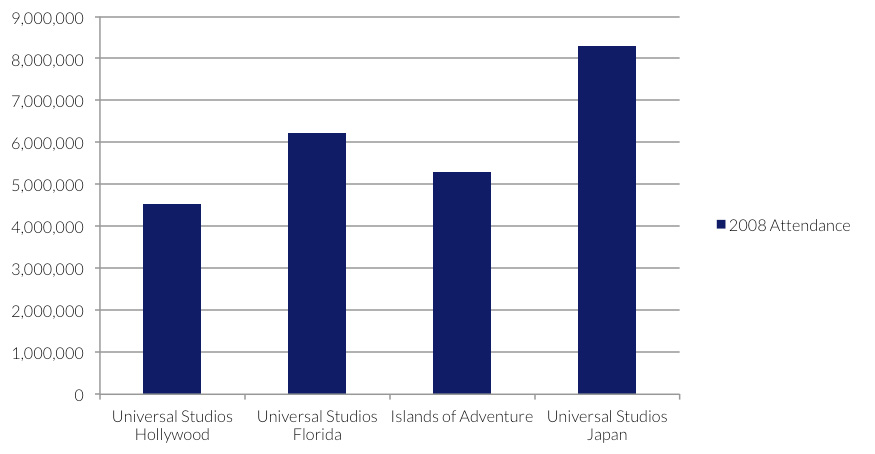 It was evident that Universal needed something to counter the downturn occurring at all its parks. However, as bad as 2008 was, 2009 had fared worse for Universal parks worldwide. With the global recession taking hold, attendance dropped again at an alarming rate. Despite Universal Studios Hollywood’s new show Creature from the Black Lagoon: The Musical (replacing Fear Factor Live!) and Universal Studios Florida’s new coaster Hollywood Rip Ride Rockit, attendance continued to slide. 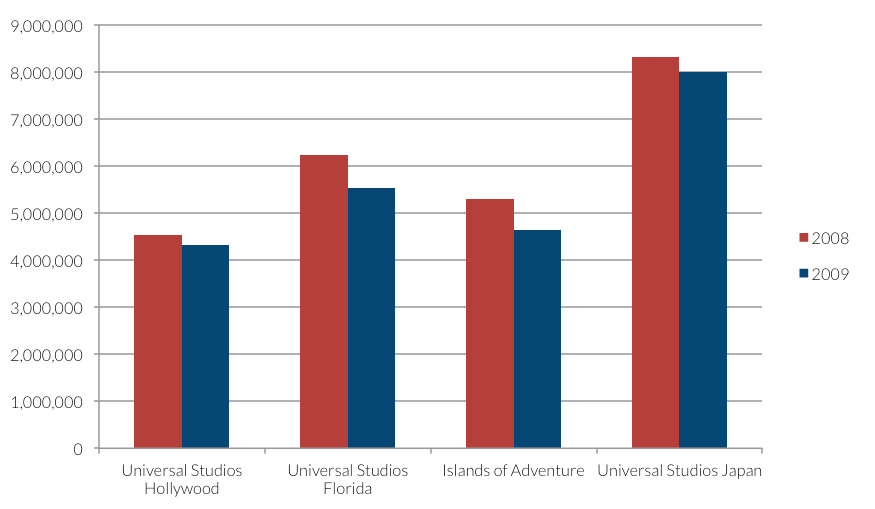 In 2010, Universal Parks and Resorts debuted new major attractions at each of their three locations – including the addition of the fourth location and fifth theme park dubbed Universal Studios Singapore at Resorts World Sentosa. Universal Studios Japan added Hollywood Dream to replace their E.T. Adventure attraction, while Universal Studios Singapore soft opened on March 18th, 2010. Finally, Universal Studios Hollywood opened its highly anticipated Studio Tour attraction King Kong 360 3D – boosting attendance at an astounding 26%. However, the most salient Universal Parks and Resorts addition was the ground breaking Wizarding World of Harry Potter expansion at Universal’s Islands of Adventure. This massive addition brought an attendance increase of 30.2% from 2009, with lines stretching from the land all the way to CityWalk.

2010 set the new agenda and helped green light a slew of new additions for all of the Universal Parks across the globe, reinvigorating Comcast’s commitment in the themed entertainment industry. 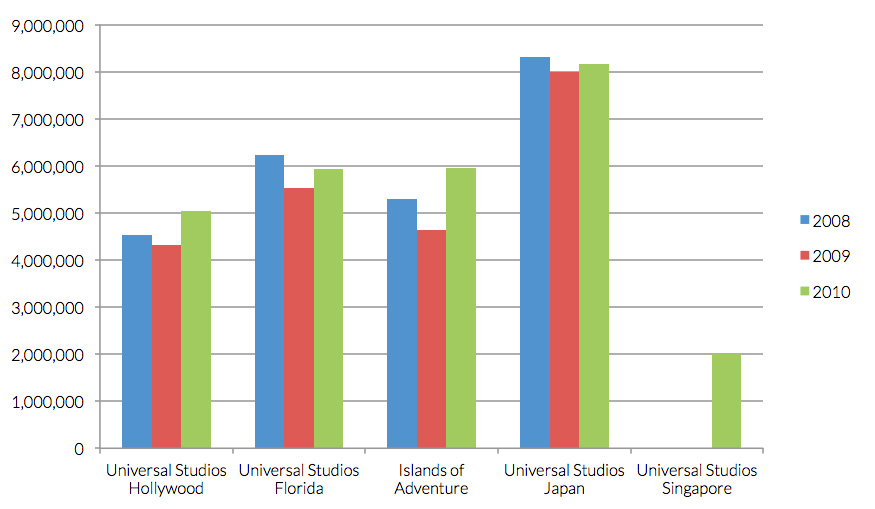 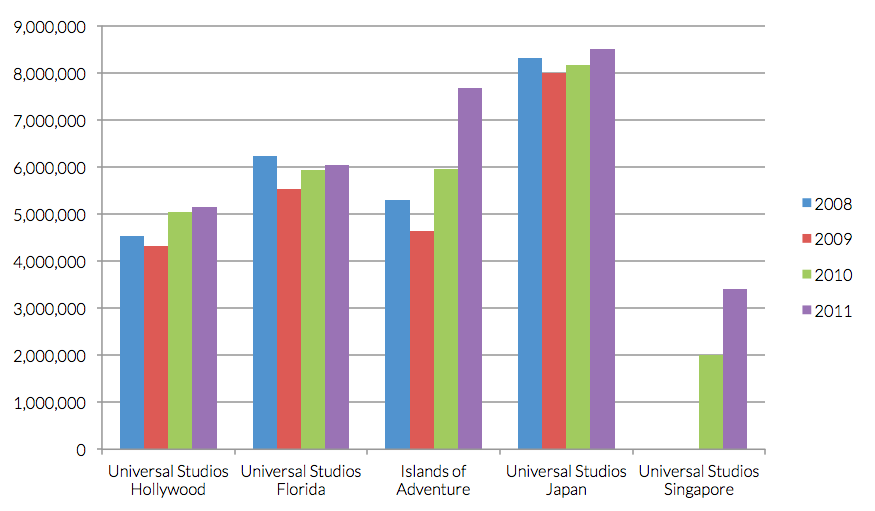 The biggest addition in 2011 had nothing to do with the theme parks directly; rather, it was Comcast’s acquisition of NBCUniversal. At the time of the merger, Comcast was not focused on the theme park business and rumors emerged that the firm was looking to sell NBCUniversal’s themed entertainment assets off. However, that idea quickly vanished as they came to realize that the theme park industry was about to take off. Realizing that the Harry Potter fandom was sweeping the world, Universal knew they could not stop there and plans were immediately put into motion to not only expand the Harry Potter universe in Orlando but also across Universal Studios Japan and Universal Studios Hollywood.

On December 6th, 2011 Universal Studios Hollywood announced that the Wizarding World of Harry Potter would be making its way to the original Universal theme park. At the same press event, Tom Williams (CEO of Universal Parks and Resorts) announced that Orlando would be receiving an expansion to their Harry Potter land – eventually becoming Diagon Alley.

2012 brought more good news for Universal Parks as the firm added new attractions on both coasts of the U.S. Hollywood unveiled Transformers: The Ride and Florida introduced Despicable Me: Minion Mayhem (based off of the 2010 blockbuster hit film of the same name). 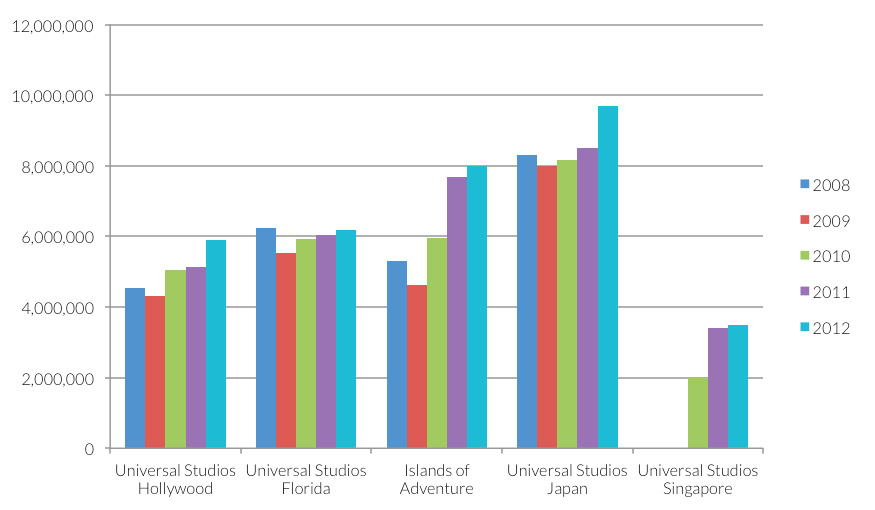 2012 was not only important because of the new attractions that opened up stateside, it was important because this is when both coasts turned into a construction zone – all in preparation for Wizarding World expansions. Hollywood was fast at work building Universal Plaza and preparing the closure of Terminator 2:3D on December 31st, 2012. Floirda closed the door on Jaws, and replaced it with Diagon Alley. Within a month of Hollywood debuting Transformers: The Ride, Florida green lit and constructed their iteration in little over a year alongside the expansion of the Simpsons Ride into Springfield. Japan also announced that the boy wizard would be coming to their park as well.

2013 saw several of the construction projects at the Universal parks wrap up. Hollywood opened Universal Plaza and Florida opened Transformers: The Ride – 3D and Springfield. Hollywood also started construction on their first land with Despicable Me: Minion Mayhem and Super Silly Fun Land. In the same year, another huge milestone for the park was accomplished as the L.A. City Council passed the NBCUniversal Evolution Plan

, which allowed the Hollywood park to start construction on its own iteration of the Wizarding World alongside a 20 year plan modernization plan for Universal City.

Once again, 2013 brought an increase in attendance. 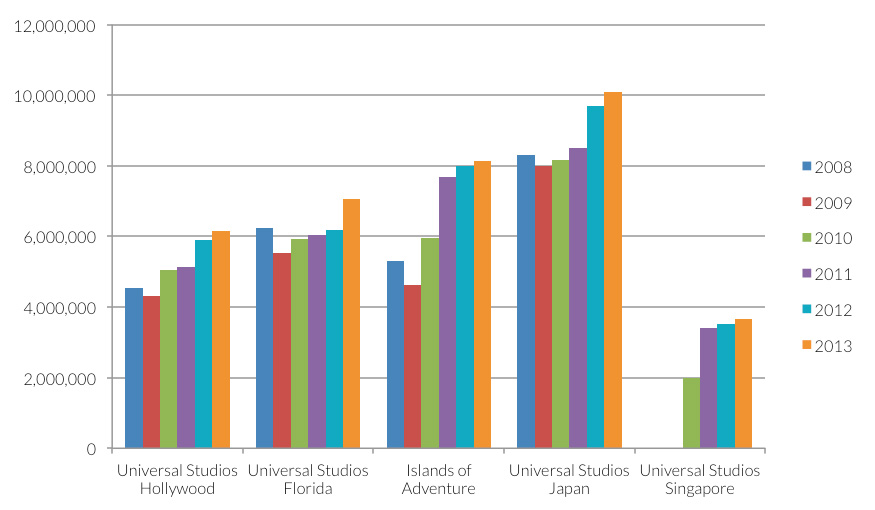 Even though we are only midway through the 2014 calendar year, Universal is poised to have their most successful year ever. With three resorts opening major attractions this year – Hollywood with Despicable Me: Minion Mayhem and Super Silly Fun Land, Florida with The Wizarding World of Harry Potter – Diagon Alley and Japan with the Wizarding World of Harry Potter – Hogsmeade debuting in 2014. Singapore is currently undergoing its own construction project with an expansion of their Far Far Away Land with a brand new suspended coaster.

Hollywood also announced a five year expansion plan – starting back in 2012 with Transformers: The Ride, 2013 with Universal Plaza, 2014 Despicable Me, and 2015 with Springfield, Fast and the Furious: Supercharged and the Nighttime Studio Tour. In 2016 their 5 year plan will culminate with the Wizarding World of Harry Potter.

But that’s not all for the Universal Parks and Resorts. Universal’s Islands of Adventure is currently under construction as well near by the Jurassic Park River Adventure (rumored to be the new King Kong ride). Universal Studios Japan also announced they will be expanding to build a second park, though no further details were announced.

The future for Universal Parks and Resorts is bright. As theme park fans, this is a time to rejoice and be excited to see Comcast fully immerse themselves into the theme park arena and invest hundreds of millions of dollars into their parks.