Every day brings us closer to the opening of The Wizarding World of Harry Potter at Universal Studios Hollywood, and there’s a lot to take in. Multiple attractions, many shops, a few restaurants and the alleged nectar of the gods known as Butterbeer. We’d like to take this opportunity to lay out what to expect from each one when you get there. This is drawing on similar experiences from the other two instances of the land, with photos from Universal Studios Japan (which means Hollywood will not be receiving Japan’s Black Lake – sorry).

The shops consist of just under a half-dozen different venues. 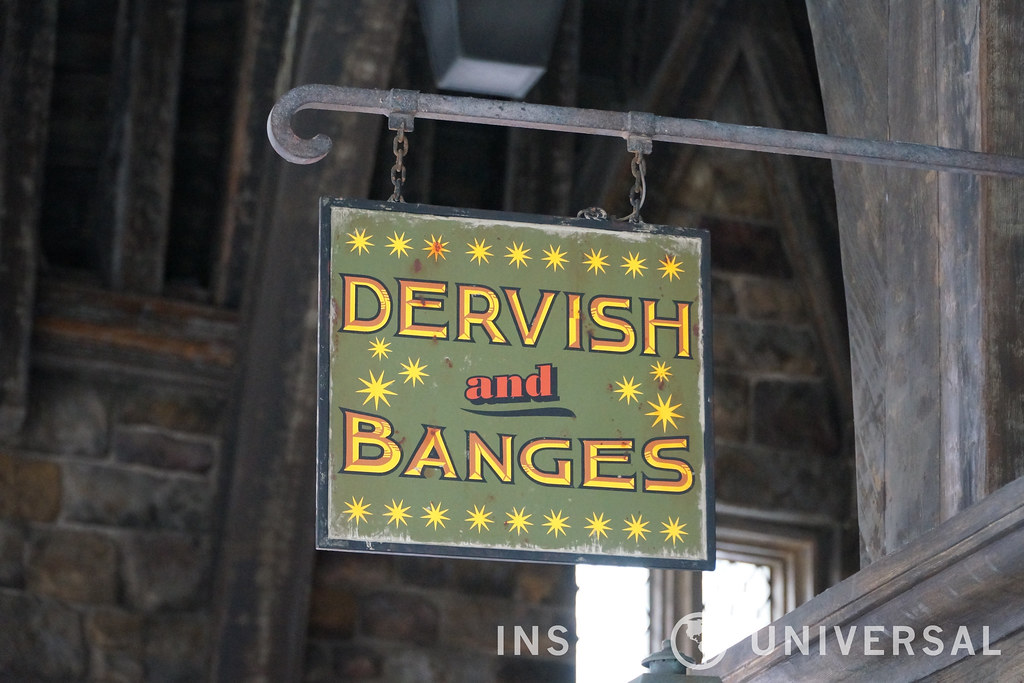 Dervish and Banges, one of the main shops in Hogsmeade, features a pretty wide selection of merchandise of toys, Nimbus brooms, robes and other wearables, including some premium goods that cost a few hundred dollars. Much like every single element in this land, there’s countless details that make going inside this store worth it, even if you have no intention to buy anything. Lots of animated displays both inside and in the store window displays.

Filch’s Emporium of Confiscated Goods is the gift shop exit to the Forbidden Journey, so you’ll probably end up here one way or another. Inside here is where you buy your on-ride photo, books, and other more standard theme-park-fare like magnets, mugs, shirts and tchotchkes to take back home to your muggle family. Fair warning, because Forbidden Journey cranks out an unbelievable number of people, and the crowd flow in this store is laughable, this is a nightmare store to attempt to do any business in. You’re best off checking out the other shops if possible, because even on a slow day, this will easily be the most crowded spot in the park. 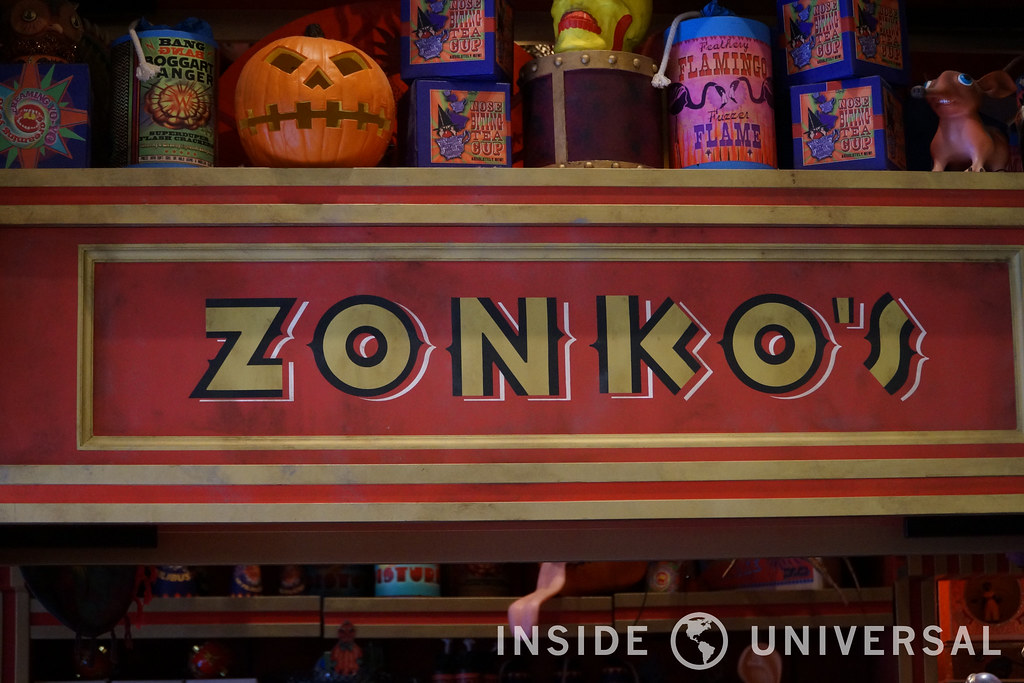 Zonko’s Joke Shop is a novelty shop, featuring all sorts of sweets, joke-props and toys all inspired by the Wizarding World. You can spot Zonko’s by looking for a window front with distinctive interactive displays.

Honeydukes is the candy store, where you can get the Every-flavor beans that are a mixture of gross and tasty jellybeans, along with chocolate frogs. 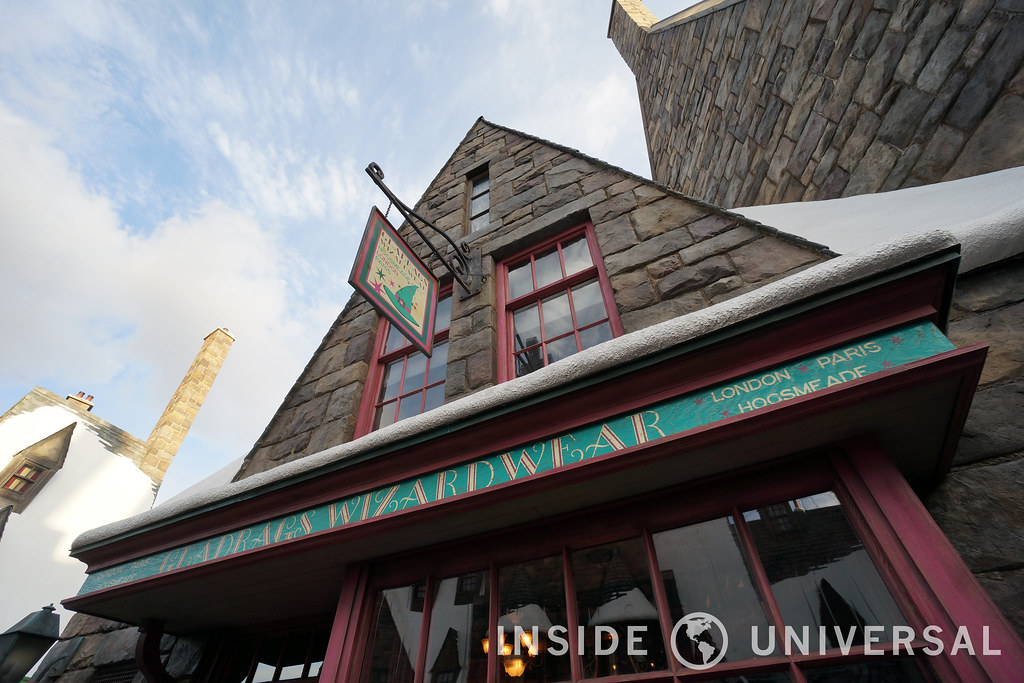 Need apparel for your classes at Hogwarts? Gladrags Wizardwear serves wizarding apparel such as capes, scarves, accessories and jewelry for all your wizarding needs. 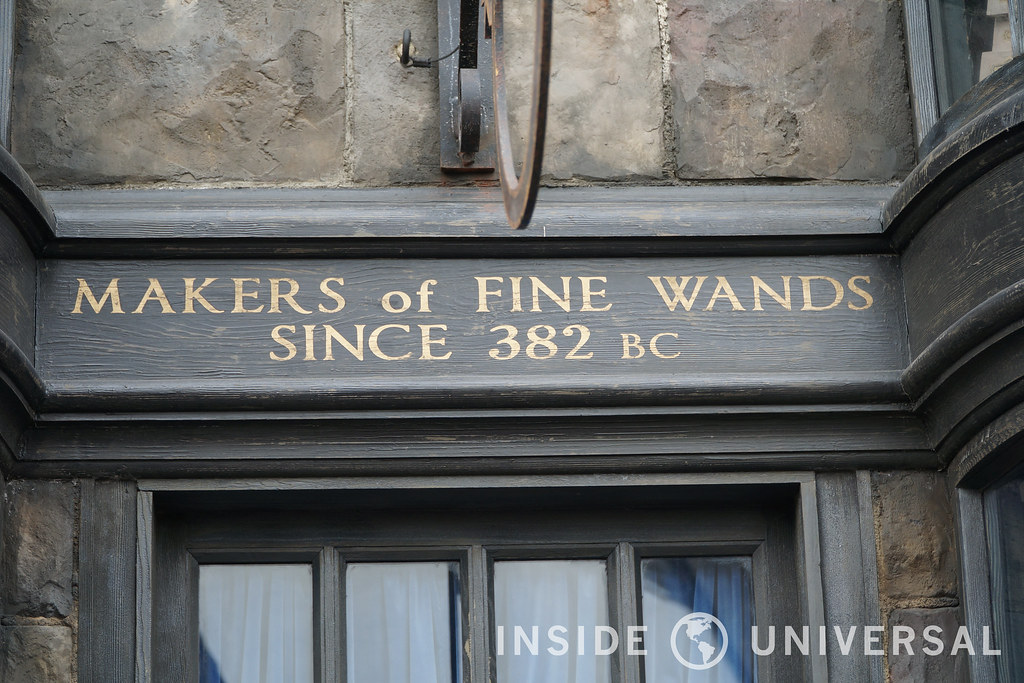 Ollivanders is another one of the crowded shops with a show all its own, because you remember you don’t pick out a wand. The wand picks the wizard, and that’s just what happens here. Don’t be surprised if there’s a gargantuan line to enter here as people want the full experience when becoming a wizard. If pressed for time, many other places in the land sell wands, including the covered wagons outside of Filch’s. 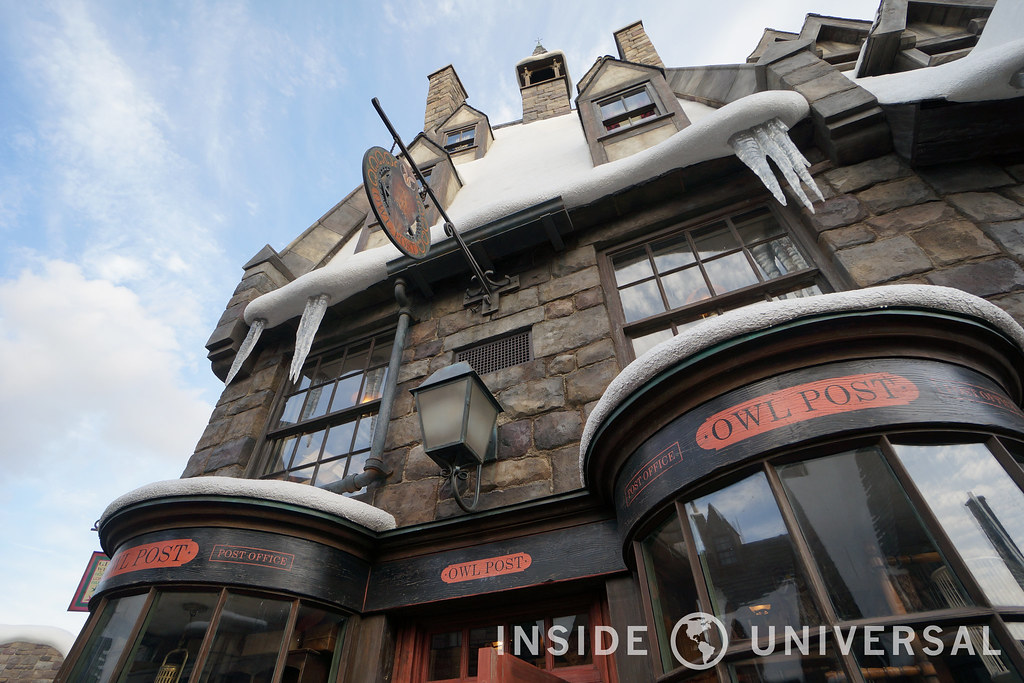 At the Owl Post, akin to the mailboxes scattered around Disneyland, you can actually send real postage, stamped right from Hogsmeade. 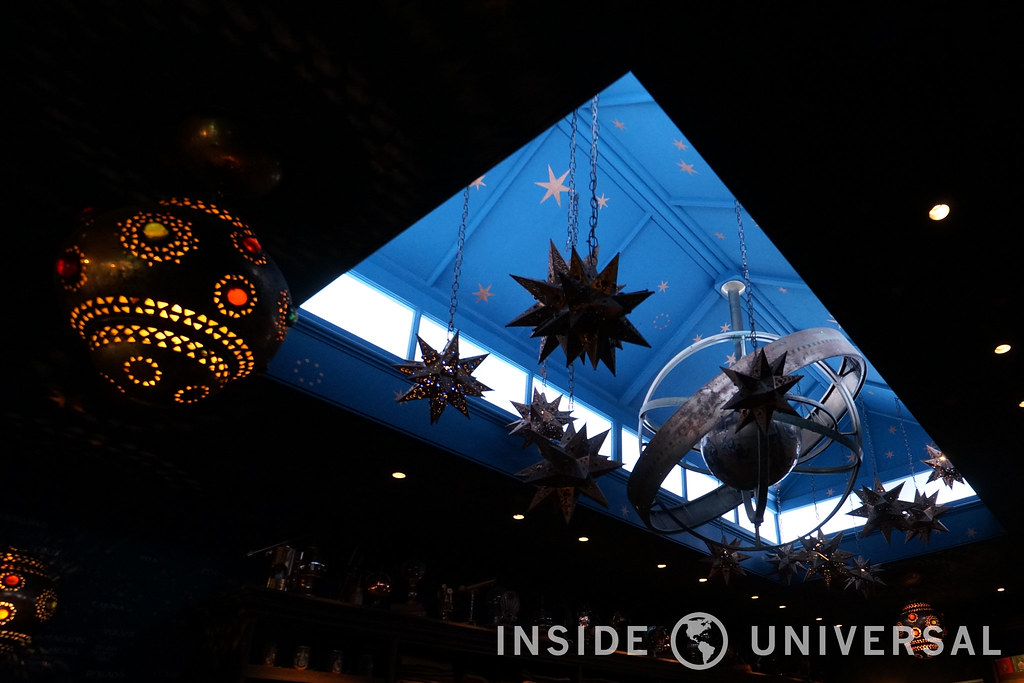 …and finally, Wiseacre’s Wizarding Equipment provides a variety of wizarding wares, including telescopes, binoculars, spheres and other worldly possessions that you may find useful in your classes.

For food there aren’t as many options as shopping, but what is there is just as memorable, if not more.

Butterbeer is sold all throughout the land and the lines for it speak for itself. A frothy butterscotch drink, is served hot, cold and even frozen like a Slurpee. Some would argue this is more of a draw to the land than the rides and shops. Despite the name, akin to root beer, it is non-alcoholic, so kids can drink up, too.

If you’re able to stomach British food, then Three Broomsticks has dining options for you, with options like shepherd’s pie and fish & chips. Of course, knowing full well that not everyone is prepared to go whole hog into England’s dining selection, more traditional American options are available, like chicken fingers and mac & cheese. That is if you can find a table, but that goes without saying. 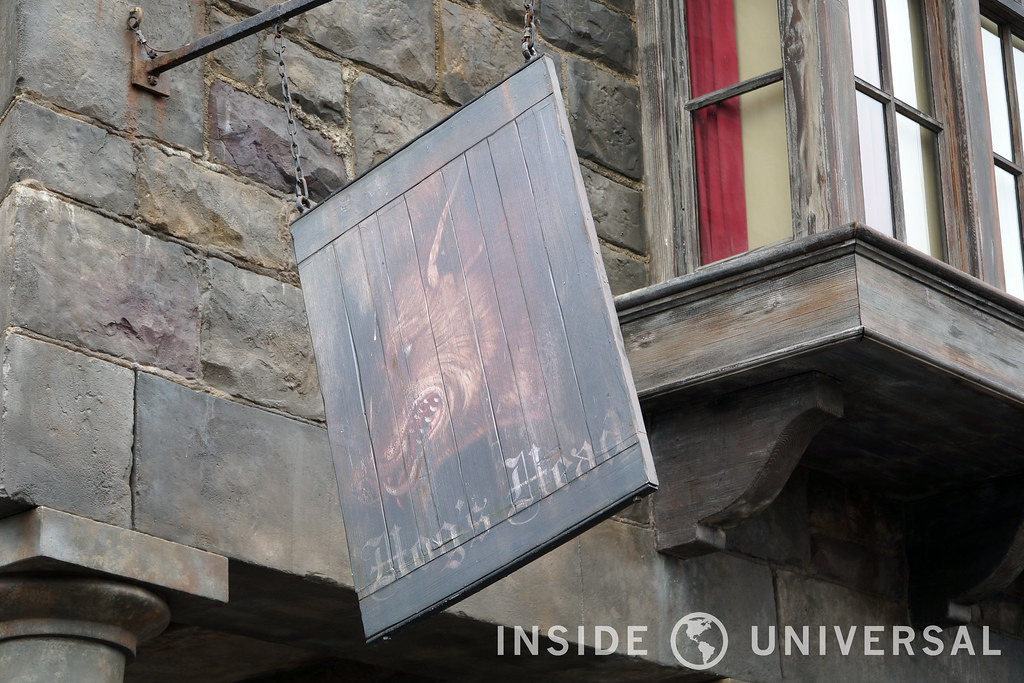 If you’re looking for authentic British alcohol, you can find Wizards Brew, Fire Whiskey, Hogshead and Dragon Scale at Hog’s Head along mixers using juice and non-Coke products. If you’re not into alcoholic beverages, you can also try warm Butterbeer – available at the counter.

Finally, regarding attractions, there’s the big tentpole, Harry Potter and the Forbidden Journey, but there’s a few other surprises inside. 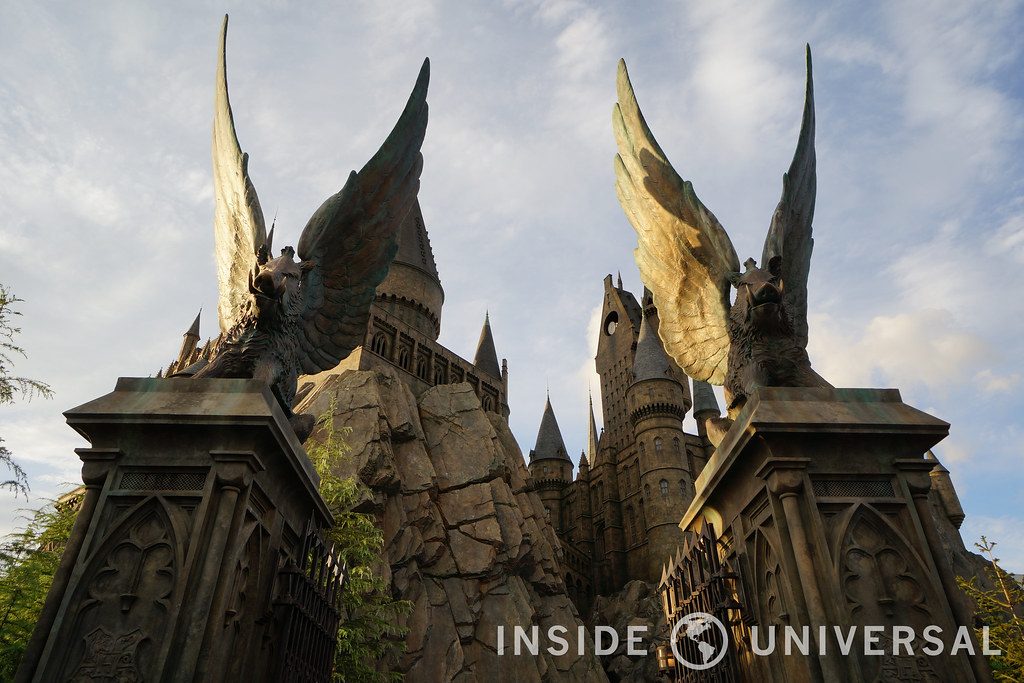 Harry Potter and The Forbidden Journey is the big multi-million dollar attraction that’s going to get people into the park. After walking through Hogwarts, an attraction itself, you sit 4 to a bench, connected to a Kuka robotic arm as you are whisked around the entire Wizarding World, between both 3D screens and practical scenes in a fairly seamless manner. There’s honestly no need to delve into the Harry Potter lore to appreciate the ride as the visuals are strong enough to tell the story. While Orlando and Japan both opened their versions in 2D with 3D versions following after in Japan, this will be the first version of the land to open directly in 3D. It’s thought that during the conversion, the ride was made slightly more tame, to hopefully reduce the chance of knocking off the 3D glasses. It remains to be seen how intense the ride is at Universal Studios Hollywood it initially opens.

Additionally, to help the ride move as many people as possible, all guests are required to store all loose objects in free lockers before riding. These lockers are at the entrance to Hogwarts. Quite often the queue extends past this room, so you will likely find yourself splitting your wait both with and without any gear you brought with you. And don’t ignore these lockers. The ride will throw you on your back and knock the things out of your pockets. Glasses are provided once you’re locked into the ride vehicle.

Some more information on Forbidden Journey at Universal Studios Hollywood that might interest you: the ride can cycle a little over 2000 guests per hour using nearly 50 ride vehicles. Team members will board and lock your restraints in ideally under ten seconds, so expect a fast turnaround once you reach the dispatch station. Gate A and Single Rider will be provided, though availability may depend on the day of operation.

Flight of the Hippogriff is a simple outdoor roller coaster where you ride a basket-woven griffin vehicle. The track here in Hollywood is actually a tad faster and taller than the other instances, so even if you’ve ridden once elsewhere, it might justify another tour just to give it a shot. During slow days, if this has a low wait, it’ll be a great time killer, but you’ll feel ripped off if you have to wait longer than 60 minutes for this. 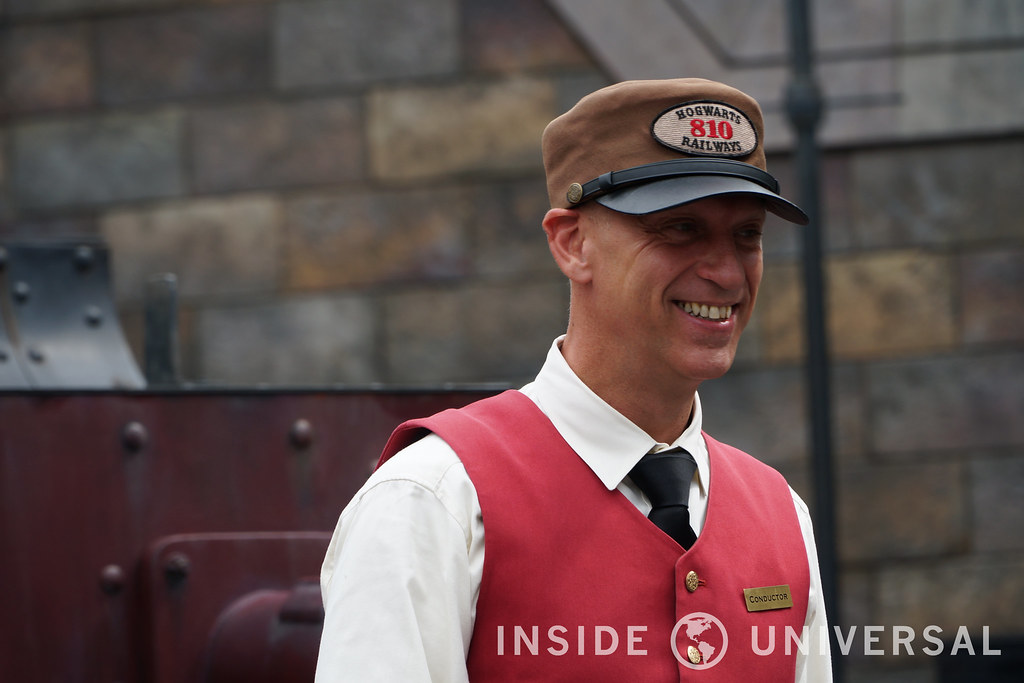 Echoing the opening of the Wizarding World in Orlando, you can pose with the Hogwarts Express in Hogsmeade. Quite often you’ll find the conductor posed right outside, happy to accompany you in a photo, as the Express billows steam in the background. For a simple prop, this is a popular photo op in the land.

So while most muggles will be drawn to the state of the art E-ticket, it’s clear to see there’s a lot of other fun things to enjoy in Hogsmeade, so don’t feel rushed to go right up to the castle and leave immediately after. At the same time, given the expected crowds when this land opens, it might be impossible to do everything in the land in a single day. Take your time and enjoy it. It’s been a long time coming and it’s almost here. 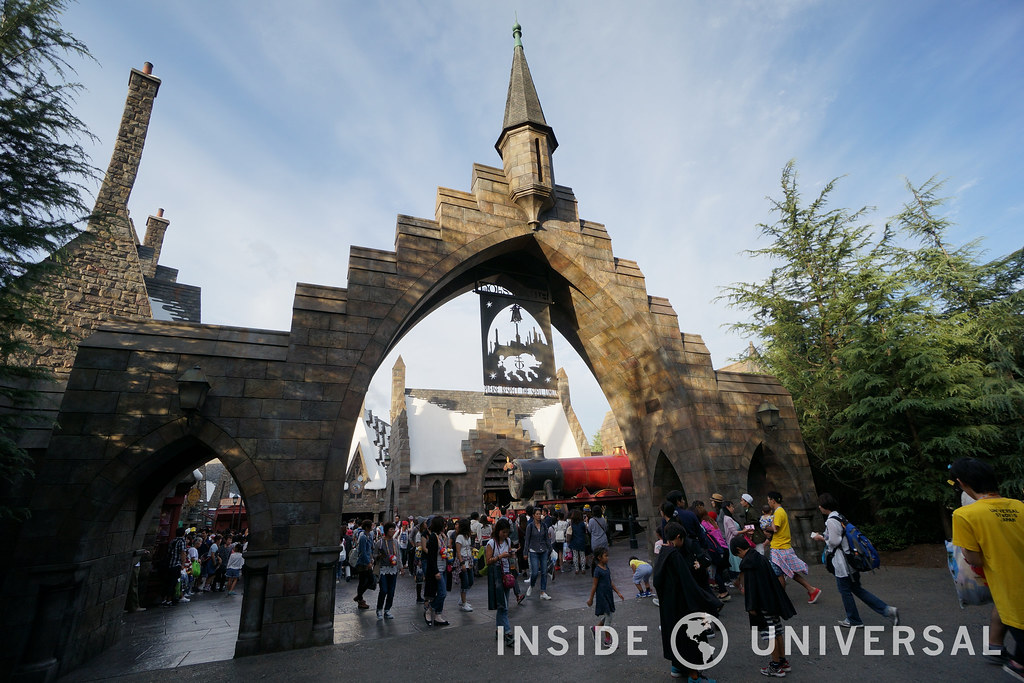