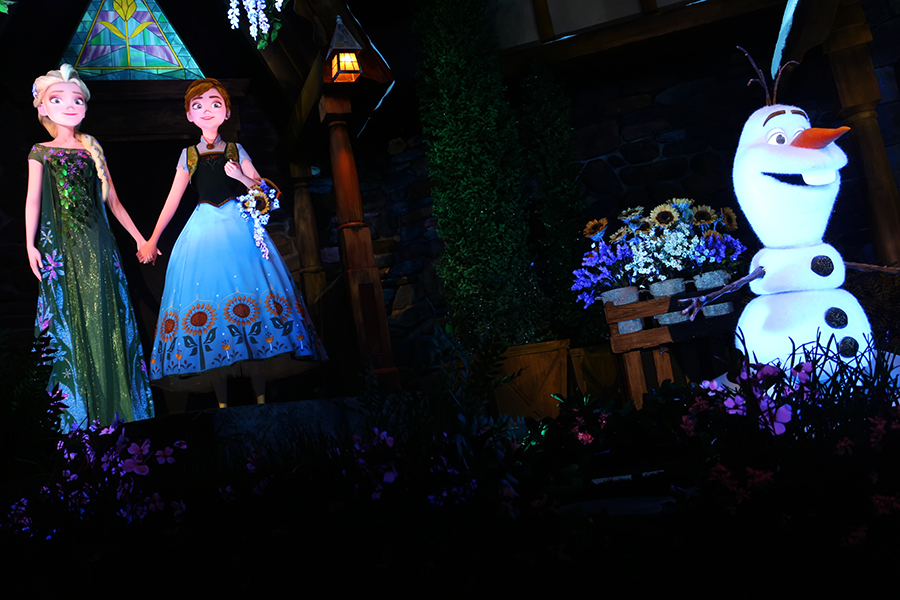 Frozen Ever After has officially opened in the Norway pavilion at Epcot.

Today, guests tried to be first in their quest to ride the new attraction; with many fans waiting at Epcot’s turnstiles since 7 am. By the time we showed up around 8:35 am, the line was estimated at 3 hours long with an hour of the wait taking place inside the queue itself.

The attraction is really well-done, especially considering it’s an overlay. The audio-animatronics are some of the best on property, especially the first Olaf AA.  The only glaring issue we see is the ride’s capacity. It loads very slow, and with the popularity of Frozen – we may see long waits for the immediate future. By the time we left Epcot, the line was estimated to be between 4-5 hours. We also want to echo the thought that it shouldn’t have been a overlay, but a completely new attraction so there wouldn’t have been a limit to what they can do. It’s a huge missed opportunity, but what’s done is done.

The new attraction features Elsa, Anna, Olaf, and others as they take part in the “Summer Snow Day” Celebration. The queue for the attraction now snakes through the old Norway movie theater and loads at the former unload station of Maelstrom. Once aboard, guests will see a combination of audio-animatronics and screens recreate the popular songs from the hit film.

The new Anna & Elsa Meet & Greet opened this past weekend at the new “Royal Sommerhus”, the summer home of Anna & Elsa. The Meet & Greet  is located right as you enter the pavilion of Norway. The Meet & Greet features several different “rooms” to meet the 2 princesses in order to keep waits to a minimum; but guests (and more importantly, children) are none-the-wiser. A new shop called “The Wandering Reindeer” also opened over the weekend, which sells your traditional Frozen merch; like dolls, toys, and dresses.

With the opening of Frozen Ever After, the Norway Pavilion will now open at 9 a.m., along with Future World. The other pavilions around World Showcase will continue to open at 11 a.m.

Frozen Ever After takes over Maelstrom, which originally opened with pavilion back in July of 1988. The attraction closed October 5, 2014 to make way for the new Frozen ride.

Special thanks to Meg (@Megadis13) for helping out this morning with pictures of inside the ride.

Check out our gallery below: