Universal Studios Japan has released the first concept art and details for the newly-announced Super Nintendo World; giving our first glimpse on what we could possibly expect to be announced for Universal Orlando.

The concept art features the Mario Bros prominently, along with familiar landmarks such as Bowser’s Castle, Peach’s Castle, Toad’s House, and the familiar look of a Super Mario Bros game level – which seems to feature a whole bunch of Yoshis. Also included in the concept art are walk-around characters of Peach and Toad meeting with guests.

Per Universal Studios Japan,  Super Nintendo World will be comprised of “expansive and multilevel environments filled with unprecedented, state-of-the-art rides, interactive areas, shops and restaurants, all featuring Nintendo’s most popular characters and games”.

The expansion is expected to cost 50 billion yen – or 432,882,000 million US dollars. For the sake of comparison, both Diagon Alley and Hogsmeade of the Wizarding World at Universal Orlando cost a combined estimated $456 million. 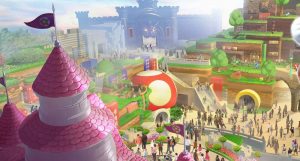 As of now, nothing has been announced for the planned Nintendo Worlds coming to Universal Orlando or Universal Studios Hollywood.