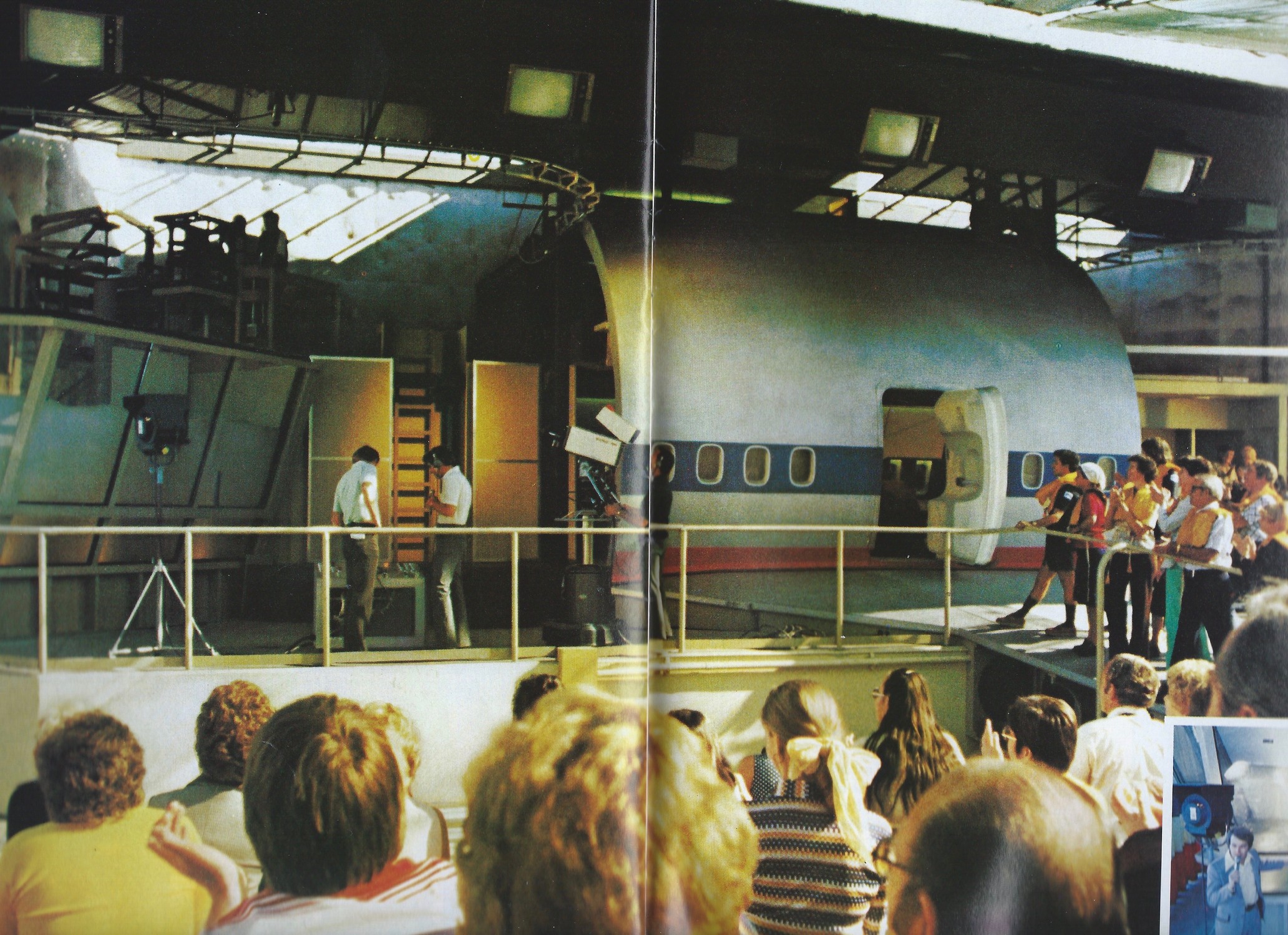 Another Universal attraction is set to join the great attraction line-up in the sky. Shrek 4D at Universal Studios Hollywood has been entertaining guests for 14 years; but on August 13, the attraction doors will close as the theater undergoes a transformation to become the all-new DreamWorks Theatre featuring Kung Fu Panda.

So as Shrek 4D prepares to close, let us take a walk through Universal’s history and see how the venue has changed over the years.

If you talk to those who worked these shows during the 70s and 80s, each person will tell you how management was hands off once the show debuted – meaning, management had complete trust with those running the day-to-day operations of the show. They had full autonomy (within reason) to make the show their own.

While these shows had scripts and the host’s would follow them to some degree, they would often go off script to give it some sort of spontaneity, which in turn would have a more engaged audience.

Forty years ago, the Universal Studio Tour – as it was then known – debuted a new venue that housed the Screen Test Theatre. Featuring an outdoor theater on the now-present site of Shrek 4D, Screen Test gave guests the chance to perform in a Universal Studios production. For many guests, this was their only opportunity to have their very own fifteen minutes of fame – a common desire before the age of YouTube and social media.

In 1975, the Screen Test Theatre’s first live show was based on the hit television show Emergency!  Hosted by a director, this lead host was part of a larger crew that included camera operators, film editors and stagehands. Guests would then recreate scenes live on stage in front of an audience of two thousand spectators. Overhead monitors would then replay the footage as each performance created a micro-episode of Emergency! featuring footage from the actual television show – an effect that would be replicated over 30 years later in Disaster at Universal Studios Florida. 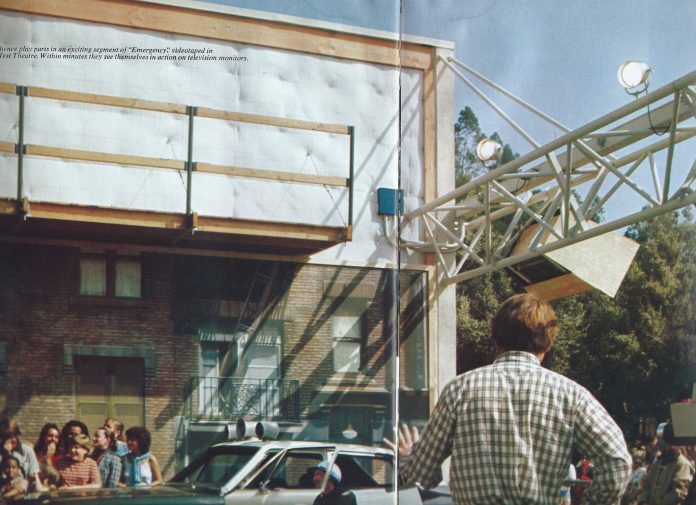 Unlike most theme park shows at the time, actors were cast directly from the audience just prior to each performance, giving the show a personalized touch.  Screen Test was so popular that The Mike Douglas Show – one of the industry’s first afternoon variety talk shows – came to Universal to participate in an episode of the show. Douglas joined the guests from the audience and assumed the role of a police officer, delighting those in the audience. 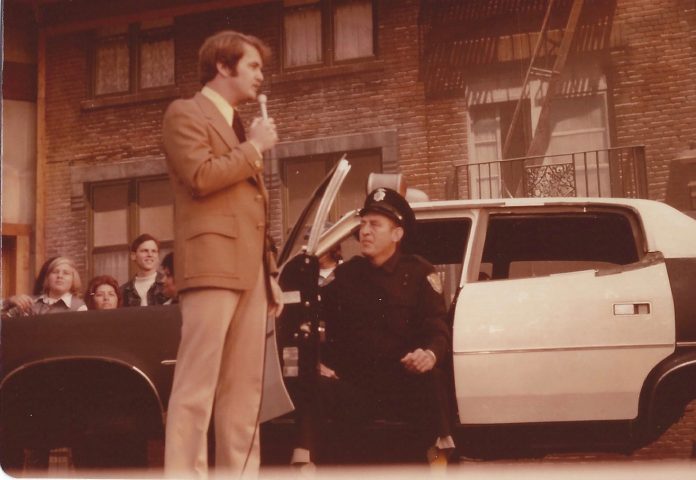 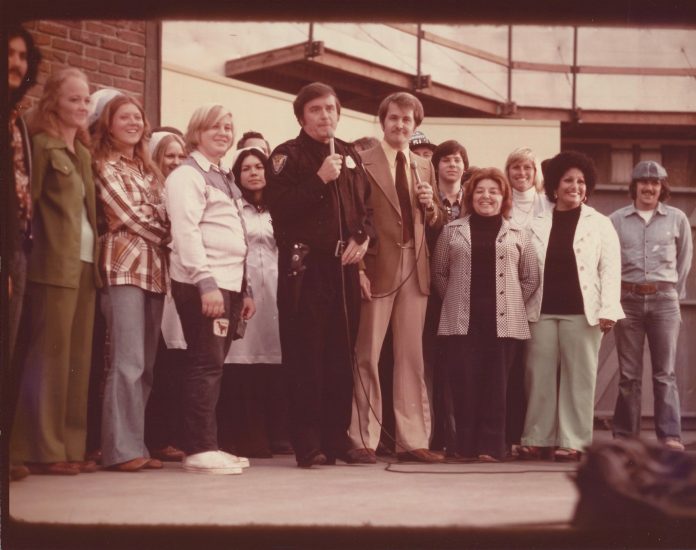 After several years, Universal deemed it necessary to give the show a facelift. Enter a new 1978 production based on the successful Airport franchise.  Dubbed Airport ’77, the show retained the same fundamental structure as its predecessor, though its new use of technology proved a turning point for the now-revised Screen Test Theatre. 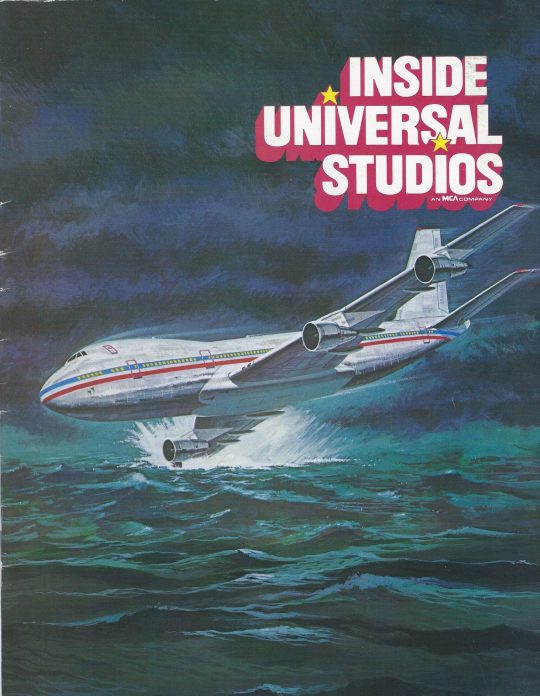 The set was far more complex than anything ever attempted on stage. As Jerry Green notes in his memoir, ”the set for Airport ’77 included a first-class section of a private 747 fuselage, a cockpit, a giant wind extending from the side of the plane into the audience and a six-thousand –gallon tank where guests would leap from a cockpit door into the water.” This tank, in turn, would be composed of three-inch-thick glass that would face the audience. A recreation of a Boeing 747 with a side door would then house actors from the audience. 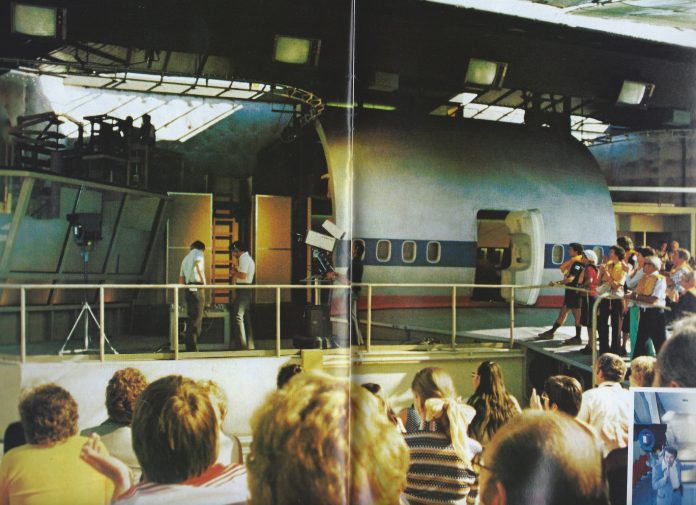 However, like its predecessor, Airport ’77 had grown old (an unfortunate byproduct of basing an entire show on an intellectual property), and Universal embarked on a new production based on a string of several movies known as The Great Chase.  The show debuted around 1984. The show was broken into seven scenes ranging from an old west bank robbery, to a 1920s era romantic turbulent boat-ride down a raging river – the latter of which included crew members throwing buckets of water at unsuspecting guests. A mysterious bag that was passed from scene to scene held the show together, with each actor directed to give a shocked or surprised look upon looking into its contents. 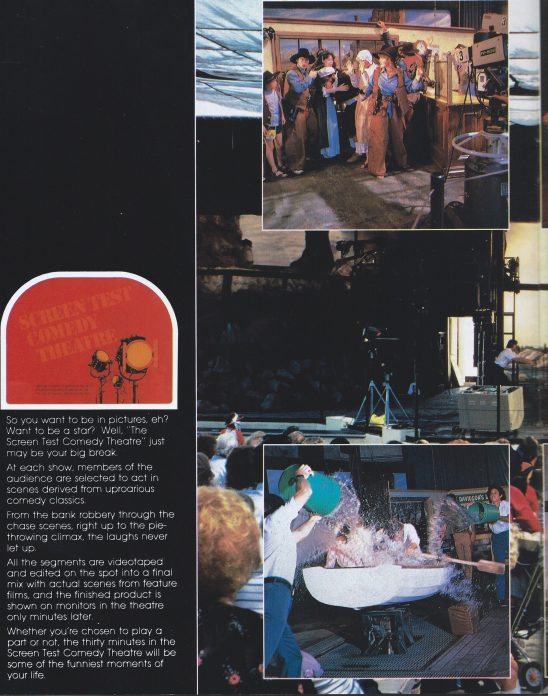 As fate would have it, the bag actually held a whipped cream pie, signaling the start of a pie fight onstage and around the theater. Much like its predecessor, The Great Chase was a hit with guests, but in the late 1980s, Universal executives decided to return the show back to a single theme. Enter Star Trek in 1988.

The Great Chase eventually closed in 1987 and the outdoor theater underwent its most extensive renovation to date, adding a roof and walls to make the venue a full-fledged indoor theater. 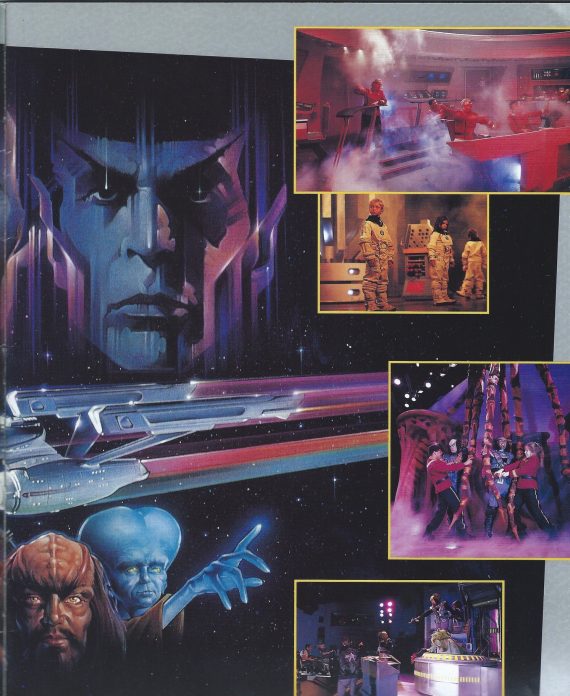 The premise? Starship Enterprise is being attacked by the Klingons Bird-of-Prey. As luck with have it, both ships become powerless, forcing Captain Kirk to send a crew to investigate their peers. To their surprise, the Klingons are there as well and a fight breaks out among the crew.  Of course, a strange creature then appears, attacking the Klingons. Luckily, the Star Ship crew rushes in to save the day.

Once both crews return to their ships, the Enterprise comes under attack yet again from a much larger version of the creature. With a change of heart, and to return the favor, the Klingons help destroy the large creature. 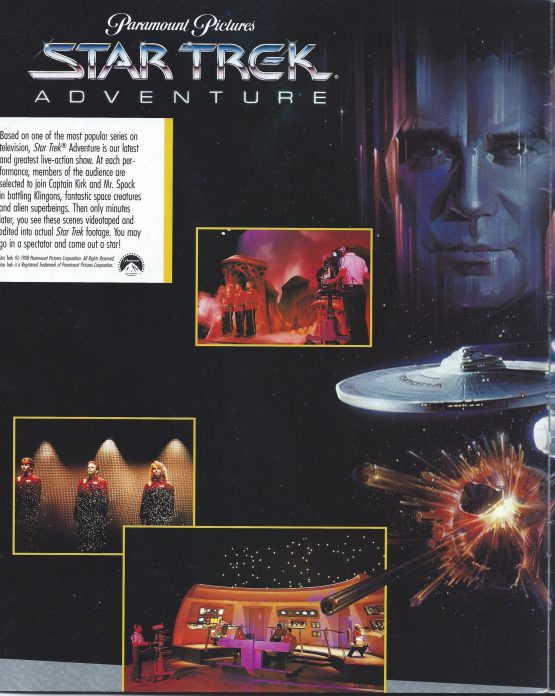 As one would expect, opening day for the new show proved to be a true extravaganza, something Universal did well.  Make it big, make it grand, and make it star driven. George Takei, Nichelle Nichols, James Doohan, Gene Rodenberry and William Shatner were in attendance and introduced on stage before a standing-room- only audience. To make the experience even more memorable, William Shatner also co-hosted the show upon its public debut. The show became a huge hit with guests and a blockbuster for Universal – so much so that it spawned a sister attraction at Universal Studios Florida. At the end of the experience, those who participated were given a chance to purchase a VHS copy of their show. 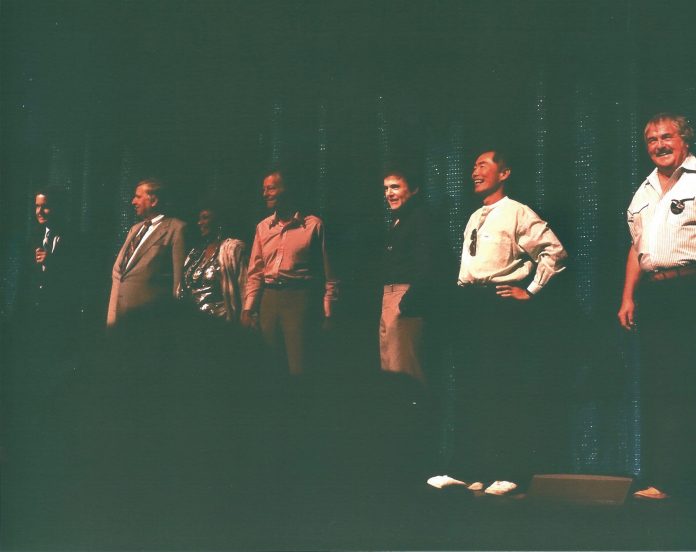 However, times have changed, and Universal decided to turn the corner and resurrect a popular cartoon franchise into a new live action film and stage show… The Flintstones.

Click here for part 2, which takes a look at the modern history, in our look back at the 42-year history of the Shrek 4D building.