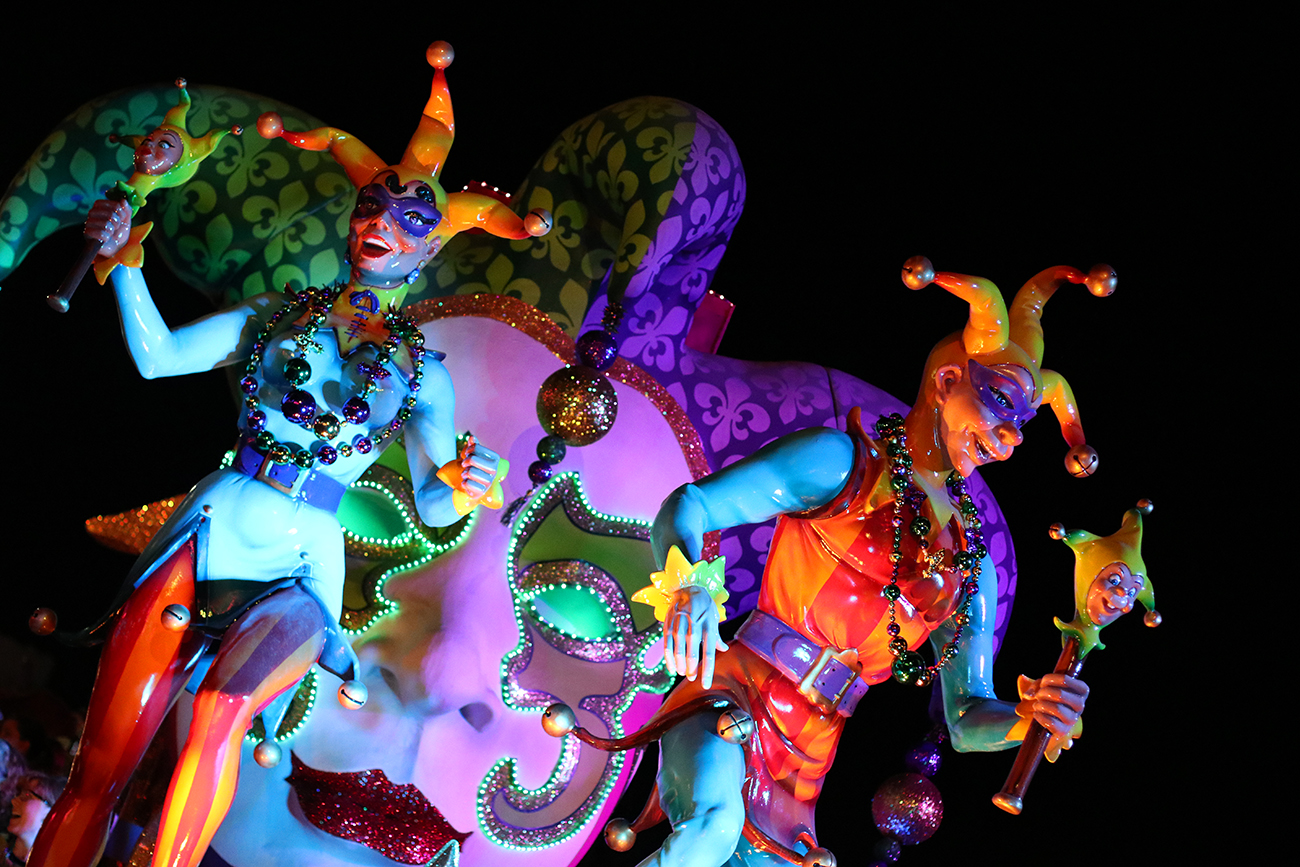 From February 3 through April 7, guests will let the good times roll as they experience an authentic, family-friendly version of the Mardi Gras bash at Universal Studios Florida. The event will be held for 64 nights – making it the longest celebration Universal has held – with the food courtyard open and the parade taking place every night.

Mardi Gras at Universal Orlando is designed to be family friendly and is included with park admission. Once the parade starts, Universal’s rides and attractions will close. Universal’s Cinematic Spectacular will not be held during Mardi Gras Nights. The event occurs rain or shine; so if rain is in the forecast, bring an umbrella. Since the event runs for 64 straight nights; every night will feature the parade but will not feature a concert.

Universal Orlando’s Mardi Gras celebration is included with admission to Universal Studios Florida or with an annual pass. Seasonal Passholders are completely blacked out on Mardi Gras concert days.

Before enjoying the live concerts, guests can dance along with dozens of energetic street performers and collect beads by the handful as the Mardi Gras parade winds through the streets of Universal Studios. The parade will have different start times depending on the night you go:

Some of the same floats from previous years will be featured – like the traditional favorites the Krewe, King Gator, Riverboat, King & Queen – but will also feature 6 newly-designed floats, making 12 new floats added in the past 2 years. The new parade floats are themed to celestial mythology and will feature:

To ensure a good spot to view the parade, we recommend picking out a location about an hour before the parade starts, especially during weekend/concert nights. Weekday parades are expected to be less crowded but that does not mean large crowds aren’t possible, especially during Spring Break time. 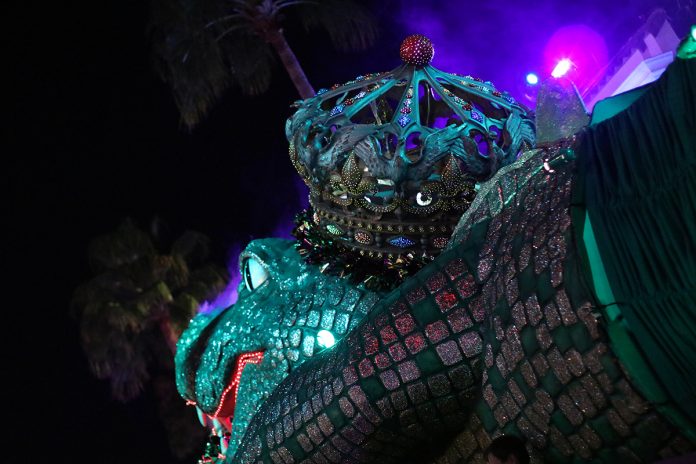 The parade makes 2 stops to perform a mini-celebration/dance number and release confetti in the sky. The stops are made down Hollywood Blvd and in New York by the Revenge of the Mummy attraction. These locations are more likely to attract a bigger crowd, so make sure to arrive there earlier.

If you’re traveling with children, kids get their own private parade experience in the Little Jester’s Parade Viewing Area located in front of the Brown Derby Hat Shop. In addition, several ADA viewing areas will be set up along the parade route for those in need. Make sure to ask a Universal Team Member ahead of time so you can plan accordingly.

Universal Studios’ rides and attractions will close when the parade starts.

We do have to stress that while it is fun to catch the beads tossed from the floats, please be mindful of your surroundings and other guests around you. 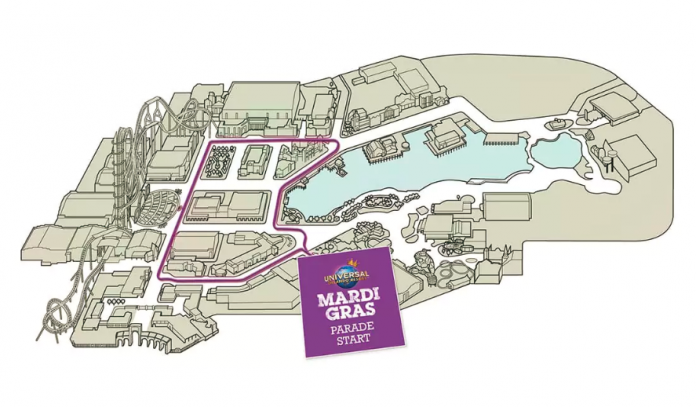 If you want to experience being a part of the Mardi Gras, you’re in luck! A limited number of guests can be part of the festivities and ride through the streets of Universal Studios on one of the floats, tossing beads to the crowd. There are some restrictions, however:

Annual Passholders get priority selection and sign-ups have been completely filled for the event. However, there may be last minute float spots available as Universal employees may ask guests if they are interested in taking part in the night’s parade. The selection is completely random and is “first come, first serve”.

As the sun sets, Universal Orlando opens the French Quarter Courtyard. Guests can enjoy music from authentic New Orleans bands while chowing down on some authentic Cajun cuisine. Guests can find Nawlin’ favorites like jambalaya, gumbo, andouille sausage, beignets and much more. The courtyard officially opens up at 4 pm and will be open every night during Mardi Gras. 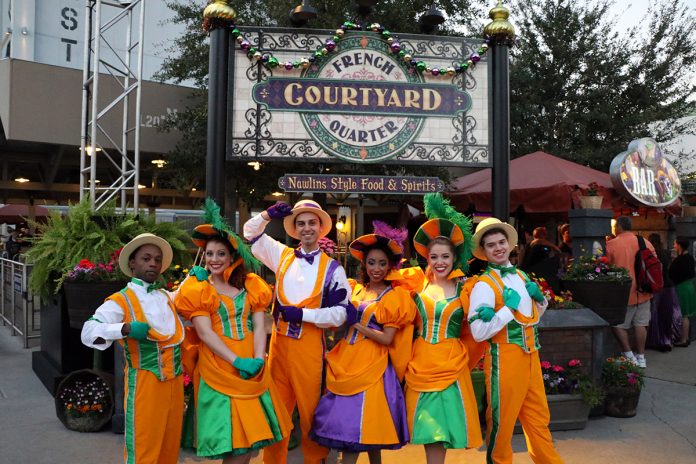 If you plan on eating at the French Quarter Courtyard, there is a variety of options to chose from. From the classic New Orleans favorites jambalaya & beignets to American classics like cheesesteaks and chicken tenders.

Located in the extended Transformers queue, a large bar area has been set up – serving beer, basic cocktails, and the event’s signature drinks. Last year, the event featured several different drinks, both frozen and mixed that guests will be able to enjoy.

Concerts take place at the Universal Music Plaza Stage. Depending on the act, guests may begin to line-up early in the morning. If your sole purpose for attending Mardi Gras is for the musical act, we recommend skipping the parade to ensure a good spot to view the concert. The Plaza stage is Standing Room only. Guests with disabilities do have a designated ADA viewing area located near the far right side of the stage.

Concerts begin shortly after the parade ends and are scheduled to take place at 8:30 pm. The duration of the concert varies but usually lasts for an hour to an hour and a half.

As a passholder, Universal gives some great perks for the Mardi Gras event. This year, the perks include:

Mardi Gras has tolerable crowds for most of the event. With the event spanning over 64 nights, weekdays are known to be less crowded. However, the event can bring in some heavy traffic, especially during a Holiday weekend or “Spring Break” time. As a general rule of thumb, any Mardi Gras weekend that features 2 acts are the weekends where Universal expects huge turnouts, so plan accordingly. We recommend adding an extra 30-40 minutes of time to plan for your parade/concert viewing spot.