The Nighttime Lights have made their way to Orlando, and to cut right to the point – it’s another home run for Universal Orlando.

After the well-received Magic of Christmas at Hogwarts that debuted during Universal’s Christmas offerings in 2017, it seemed logical to bring the show over from Universal Studios Hollywood.

Combining state-of-the-art projection mapping, spotlights, and fireworks – the Nighttime Lights is aimed directly at Harry Potter fans. The new show centers around the four houses of the Hogwarts School of Witchcraft and Wizardry – Gryffindor, Slytherin, Hufflepuff, and Ravenclaw – and features narration from the Sorting Hat.

The projections represent each house very well, although the show does feel a tiny bit rushed; which would be our only critique.

The Slytherin portion of the show is undoubtedly the highlight; featuring a drum-heavy score, intense spotlight use, and eventually, a giant snake projected on the castle. During each of our viewings, the audience gave a well-deserved audible gasp of admiration during this section of the show. 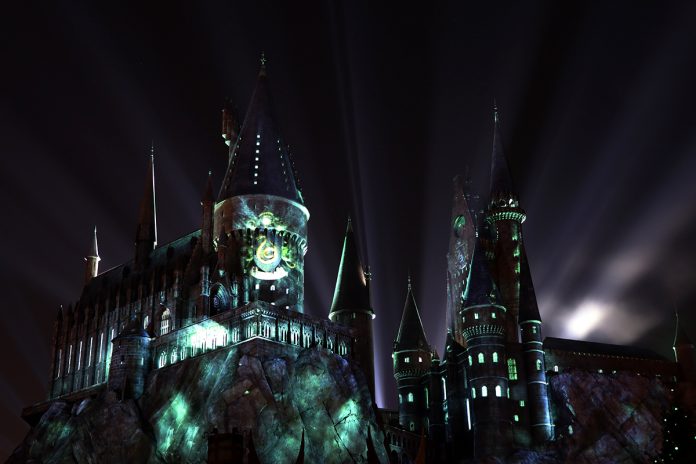 The other 3 houses each get their time to shine before a finale featuring a clever effect of the castle “revealing” the interior stairwells, rooms, and halls.

The show is definitely a must-see, especially if you consider yourself a Potterhead.

We also have to give kudos to the operations team for making sure traffic flow went as smooth as possible and made sure everyone was able to get a good viewing spot.

As far as recommendations for viewing, we suggest waiting for later shows. The first and second shows will be the busiest, but the crowds dwindle throughout the night.