Universal Orlando has announced the dates for next year’s Mardi Gras 2019 event.

The event will be taking place nightly from February 9 to April 4.

For 2019, the French Quarter Courtyard will be returning to offer Cajun cuisine favorites, and Universal is teasing all-new parade floats that will be featured in the parade. The concert lineup will be released in the coming months. 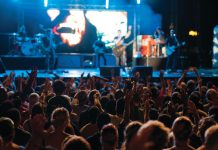