It’s time to get into the Christmas spirit, as Universal starts to put a little “mischief in your merry” this Holiday season. After last year’s new offerings, this year Universal Orlando is focusing on “establishing tradition”; which was a phrase we heard a lot of during our preview of this year’s Holidays at Universal – but there is still plenty of new things to enjoy as well.

Last year, the Holiday line-up received a substantial retooling; which saw the addition of the Christmas decorations in both Wizarding Worlds, the Magic of Christmas at Hogwarts night show, and a revamped Holiday Parade featuring Macy’s. This year, the attention has gone to tightening up their existing offerings, while also refreshing Grinchmas.

With new costumes, a new set, and a new look – The Grinch is now taking a lot of influence from the classic book, slightly moving away from the 2000 Jim Carrey film version. While we were not able to see the updated show during our preview, we were able to see the new set up close, including a taller, more Suessian Christmas tree – as well as seeing the new-look Grinch. Don’t worry about the change in appearance, though, he’s still the same ol’ Grinch. Guests can expect some new aspects to the show, including interior settings such as inside the Grinch’s Lair; and more singing and dancing from the Whos of Whoville. 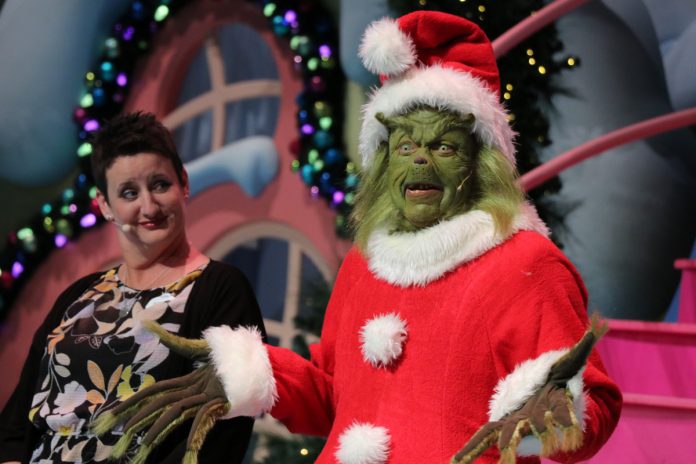 If you want more Grinch in your Grinchmas, you can also make a reservation to enjoy breakfast with the Mean One himself. Located inside Circus McGurkus Cafe Stoo-pendous at Islands of Adventure, guests can sign-up for a separately ticketed breakfast on select dates (tickets for this festive breakfast are now available). Guests will enjoy a breakfast buffet while also having the chance to meet and take photos with the Grinch.

Speaking to Lora Sauls, Manager of Entertainment Creative Development and Show Direction for Universal Orlando, she emphasized on the tradition Universal hopes to establish with all these offerings but was definitely excited about the updates to the Grinchmas show. We’d be hard-pressed to not mention how incredible it was for the Resort to go from Horror Nights to the Christmas Spirit in the span of 10 days. Sauls credits the dedicated staff being ready to go “at the stroke of midnight”.

One thing that Universal seems to have focused on lately for their events is themed food & treats. For the Holidays, the line-up features lots of special one-of-a-kind sugary goodies, which will definitely satisfy those looking to indulge their sweet tooth. During the preview, we got our sugar overload on and decided to try every single delectable dessert offered. From a unique take on the traditional with the Apple Strudle on a Stick, to the bold approach of Voodoo Doughnut’s Sour Apple Cream Grinch Doughnut, there’s not a bad treat to be had; with plenty of different treats to satisfy any taste bud.

The Wizarding World still shines during the Holidays, being the one thing you need to experience during your visit as each park still offers a unique Wizarding Christmas experience. Guests can enjoy special holiday-themed performances by the Frog Choir in Hogsmeade while Celestina Warbeck and the Banshees steals the show over in Diagon Alley. Of course, no Holiday experience is complete without enjoying some hot Butterbeer, which has returned for the Winter season. As night falls, guests can enjoy the awe-inspiring “The Magic of Christmas at Hogwarts Castle” nighttime show. 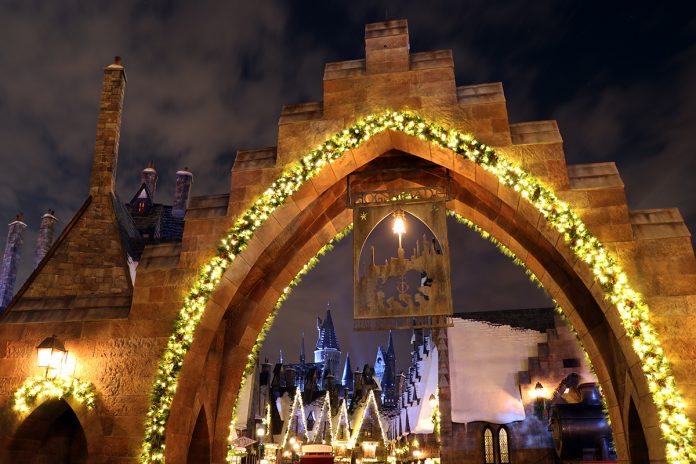 Now in its 2nd year since last year’s retooling, Universal’s Holiday Parade featuring Macy’s offers more than 30 larger-than-life balloons and floats, along with hundreds of performers, Universal characters, and finally, is capped off by Santa himself lighting up the huge Christmas tree in New York. (Yes, the squirrel is in there; somewhere..) Guests may also get the opportunity to dance and interact with some of the characters during special appearances prior to the parade.

The best-selling holiday artist of all time, Manheim Steamroller, will also be returning to Universal Studios Florida to fill the air with the sounds of the season. Guests can take in live concerts at the Music Plaza Stage on the following nights: Nov. 17, 18, 24, 25 and Dec. 1, 2, 8, 9, 15, 16.

We’ll be on hand this weekend to check out more of Universal’s Holiday offerings, especially the new Grinchmas show and give our review next week – but as we stated last year; they knocked it out of the park. Definitely make plans to visit as the Holidays at Universal are unlike anything else.

The Holidays at Universal Orlando begins this weekend, November 17 and runs until January 6, 2019. For more information, show times, tickets, or reservations, visit UniversalOrlando.com