We’re a little under a month away from the official opening of Hagrid’s Magical Creatures Motorbike Adventure, with the new attraction set to open on June 13 at Islands of Adventure. Universal Orlando invited us out to get a sneak peek at the attraction, finally allowing our first up-close look at the coaster. We did not leave disappointed.

While we only saw portions of the queue, everything we saw looked jaw-droppingly fantastic; and there’s still some work left to be done as we inch closer to the opening.

Creators were excited to design an attraction based around everyone’s favorite magical giant. As previous attractions circled around Harry Potter, working on the new coaster allowed to expand into the Wizarding World imagination. Universal is officially designating the ride as a “family thrill story coaster”. It has the thrills for thrillseekers but also has the ability to tell a story that traditional coasters can’t do. 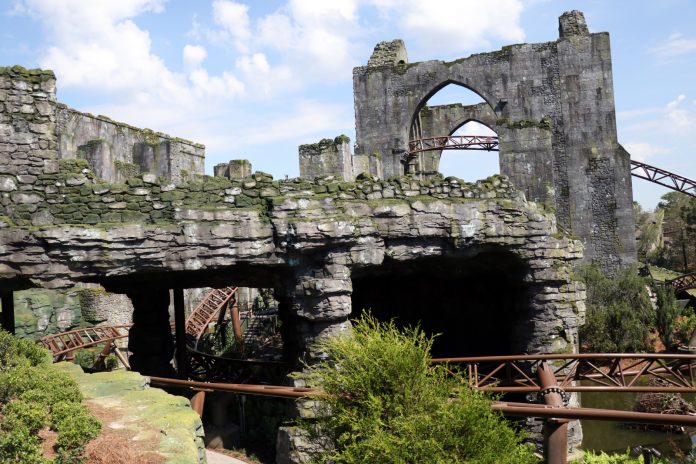 The ride takes place along the outskirts of the Hogwarts Castle, where Rubeus Hagrid has adopted some old ruins and the surrounding land in order to take care of his magical creatures. The ruins are an original setting, predating the Hogwarts Castle. The grounds feature the ruins, the Black Lake, and the Forbidden Forest – where our “Care of Magical Creatures” class will be visiting.

Throughout the queue, guests will find a lot of Hagrid, as well as those aforementioned magical creatures, incorporated into the design.

One prominent decor feature throughout the queue is the “Green Man”. In architecture, the green man is a popular ornamental motif of a face surrounded by, or made, from leaves. J.K. Rowling was inspired by the green man in the creation of Hagrid, so designers felt it was a clever nod to his creative origins and wanted to feature it, most notably at the entrance. 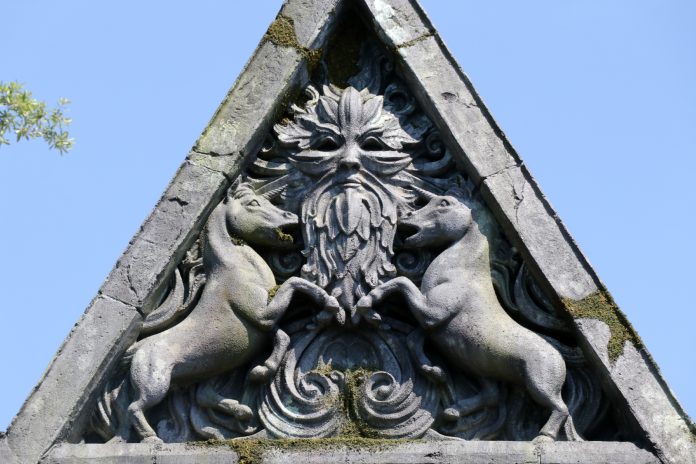 Most of the queue was redone after Dragon’s Challenge closed in 2017, with a lot of the interior portion of the queue completely unrecognizable. Hagrid’s Hut has a more expanded presence and now includes his garden. Guests will pass by Hagrid’s Hut as they near the entrance to the old ruins. Stuart Craig, production designer of the Harry Potter films, once again worked closely with Universal Creative, and felt the entryway to the ruins was very important to telling of the story of the attraction. For the ruins, designers were influenced by old English architecture, specifically gothic

Guests will notice overgrown foliage, vines, moss, and other vegetation almost taking over the entrance to the ruins. Once again, the green man adorns the top of the archway; with unicorns on each side of its face. As you near the entrance door, there’s a huge wall sculpture featuring merpeople and grindylows.

Gary Blumenstein, creative director of the attraction, states they tried to include creatures that were beloved by fans, but also would help with the story; and tried to implement as many of those creatures into the design as possible.

We were informed that not only has Hagrid used these ruins to help care for the creatures, but it’s a popular spot for the students of Hogwarts to visit. Inside the ruins, Hagrid’s voice leads us through the hallways, giving us details of our impending “Care of Magical Creatures” class. Paintings of creatures adorn the entry halls, (including a nod to a former attraction) as we begin to make our way to the first pre-show. Here, guests will encounter Arthur Weasley and Hagrid – brought to life with musion technology – working on Hagrid’s motorbike, explaining how we’re going to be introduced to the Blast-Ended Skrewt, and “hopefully” other magical creatures on the grounds.

They also cleverly use the “Geminio” spell, aka the duplication charm, to explain the multiple motorbikes. There are some other neat tricks used in the pre-show, but we’ll keep that to ourselves for now, and for you to experience yourself. 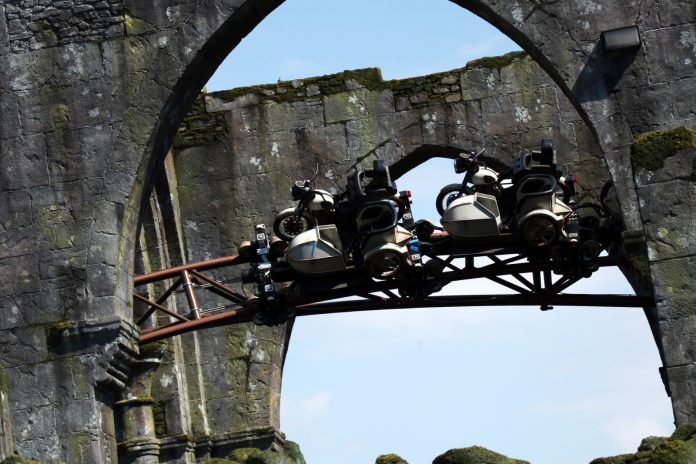 As we traverse deeper into the building, guests will see materials from the class, including dragon eggs on the verge of hatching and a makeshift nursery where Hagrid kept his Blast-Ended Skrewts. Due to the size, and danger, of the skrewts – Hagrid has moved them to a stable on the outskirts of the ruins (The hut near Hogwarts Express).

And that’s where our queue tour ended… Universal promises a couple more surprises are being withheld until the ride opens.

As far as the ride experience, the “story coaster” clocks in at just over 3 minutes long, and will feature innovative technology, including the most launches of any roller coaster in the world – with 7. The coaster will feature a free-fall 17-foot vertical drop, and will have 2 different “ride experiences” – on the motorcycle or in the adjacent sidecar.

Dubbed the “Harry Potter seat”, the sidecar sits just a few inches shorter than the motorcycle, allowing for a completely different ride experience. Due to the height difference, Creative designed the show scenes from the view of the sidecar, so riders wouldn’t be shortchanged.

The ride eventually leads us through the Forbidden Forest, where Universal planted close to 1,200 trees to bring the forest to life. As much of the foliage is freshly planted, the forest is not as dense as it should be – but Universal states the plants are planned to overgrow to really envelop the ride for a wild look. Much of the trees are from Florida and Georgia, but were carefully selected to make sure they matched the look of trees that could be found in Scotland.

As the ride is still being worked on, Universal did not delve into much more about the ride experience – keeping some secrets until it opens.

Other tidbits we learned during our visit:

Though unfinished, many of us left wanting more – which is a very good thing. Everything looks stellar, and so far, looks to rival some of the best themeing Universal has ever created.

When it opens on June 13, 2019, Hagrid’s Magical Creatures Motorbike Adventure will join the lineup of award-winning entertainment experiences in The Wizarding World of Harry Potter at Universal Orlando and bring an all-new adventure inspired by J.K. Rowling’s beloved stories to life on an epic new “story coaster.”

Hagrid’s Magical Creatures Motorbike Adventure will be located in The Wizarding World of Harry Potter – Hogsmeade at Universal’s Islands of Adventure.