Inside Universal
Home California Knott's Berry Farm Knott’s Summer Nights Debuts for the 2019 Summer Season at Knott’s Berry...
Share
Facebook
Twitter
Pinterest
WhatsApp
ReddIt
Email
Copy URL
There’s a few constants when it comes to seasons at Knott’s.
Well, there used to be…
Autumn brings Knott’s Scary Farm. Winter brings the ice skating show with Knott’s Merry Farm. Spring is the Boysenberry Festival and Summer is a show in the Charles M Schulz Theater and some night time stunt show on the Calico Stage.
That changed this year. While the theater still is playing the amazing Beach Blanket Beagle, now in its second year, the stage has been turned into a park. A park within a park, if you will.
Dubbed “Knott’s Summer Nights”, it’s a collection of a few different activities. 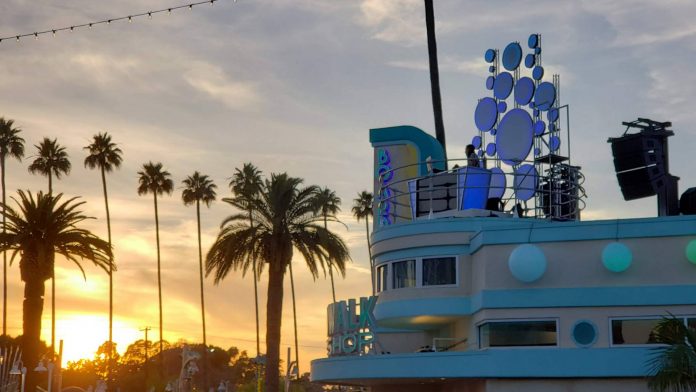 The Music
Not content to just host the fantastic regular three house bands or so in various stages around the park, once 7PM hits, there’s now bands playing at Calico Square (Almost immediately after the Ghost Town Alive hoedown finishes), a DJ that plays atop the exit to Hangtime, and a band that plays on the Calico Stage. 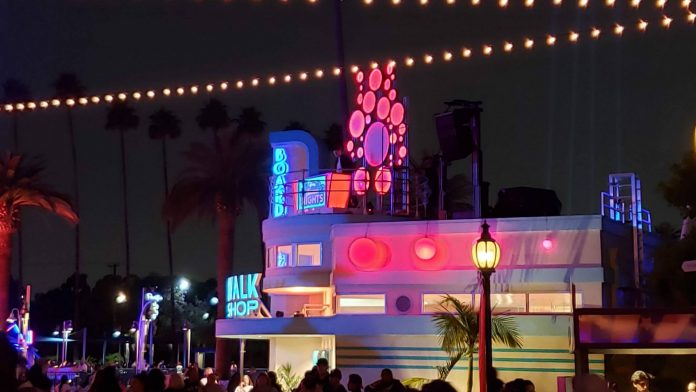 The bands don’t all play at once, instead alternating sets, but during the sound checks, that area of the park can get a little noisy. 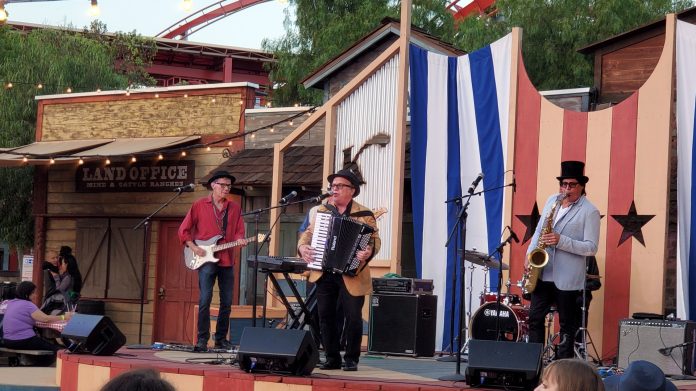 The lineup has been posted fairly regularly on the feeds for Knott’s on Facebook, which is out of the norm for them. Usually, you have to be in the park to get the clearest view of the entertainment schedule. We hope they continue and expand these postings for all the bands going forward.
Even with the variety of bands, from 90s pop hits to New Orleans Jazz, everything was entertaining, and everyone can find something that really clicks with them.
The Food
Knott’s has been doing their food card for a few events now and it’s become a staple of those events, but this is the first time they’ve done it for the summer. Most of the booths are scattered around a central area, but this time it also includes fudge-covered apples in the Ghost Town Fudge Shop. And a few adult spirits are also available. 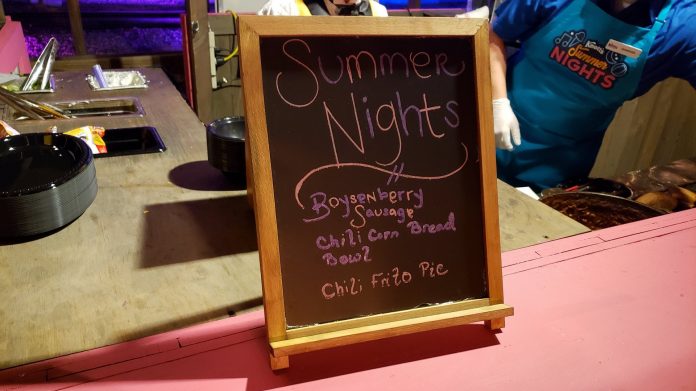 It’s not super fancy food, but it’s also not all themed to a single ingredient. It’s ice cream sandwiches, it’s churros covered in frosting, it’s core summer treats. That’s something to be appreciated. As food can get more exotic, we sometimes forget the simple pleasures to be had from just having a good ol’ fashioned ice cream cone. 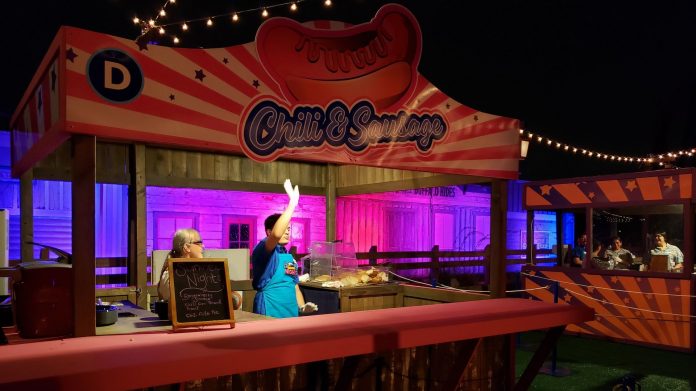 Outside of the sampling card, there are also smores kits and a few fire pits scattered around if that tickles your fancy.
The Games
In the last few years, Knott’s has pulled away from their carnival games. There’s still a few good staples, but in this case, the games they’ve put out are simple ones that are free. 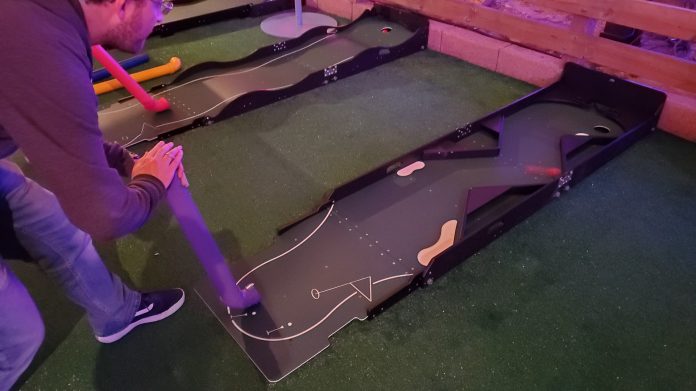 There are unique takes on minigolf, an oversized beer pong called “Berry Pong,” and corn hole scattered on the borders of the astroturf lawn. It’s all too easy to dismiss them, but they offer a lot of fun while having conversations, or just distracting the kids while you eat on the benches nearby. Also, the minigolf and ring toss games are surprisingly difficult. (Anita Drink made it look super easy. She’s had practice.)
As the night progresses, some additional group games are wheeled out and you’ll find yourself competing with other guests in short Minute-to-Win-It-style games. It’s not on any schedule, you just have to keep an eye out for it. 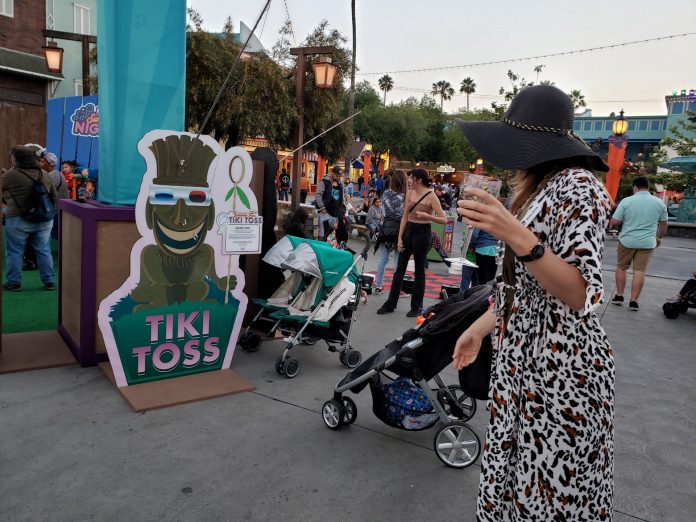 The biggest surprise of Summer Nights was the introduction of the “Block Party Planning Committee” which can be thought of as the night time version of Ghost Town Alive, but without the story. 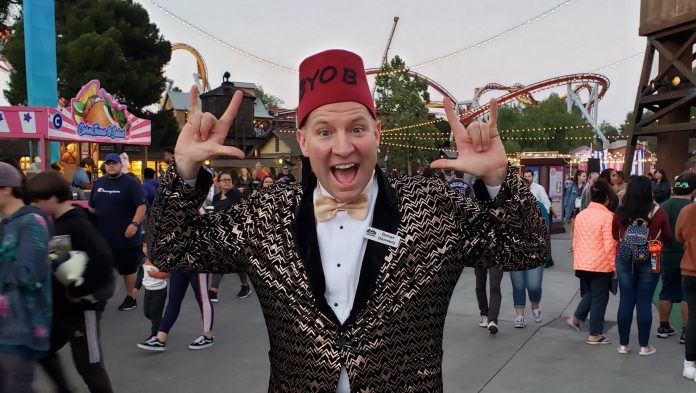 The general theme of the event is “backyard party”, which the decorations of the area reinforce.
Every night as the bands start to play, a handful of lively characters wander the area, after introducing the band and themselves, each playing up a different aspect of a neighborhood stereotype, from a surfer dude to a waitress on her break, there’s a great variety of characters mingling. 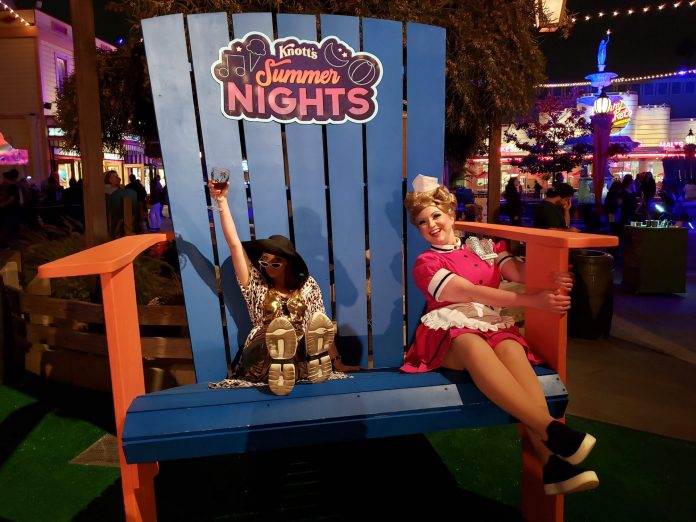 With such names as “Anita Drink” and “Duncan Disorderly”, the characters are great additions to an already fun event, almost like a resurrection of the Adventurer’s Club of Disney from years past. And a small change that’s made a big difference is these characters have their name tags on, making it more clear they’re meant to be a part of the event, and not just people really into hanging around at Knott’s. 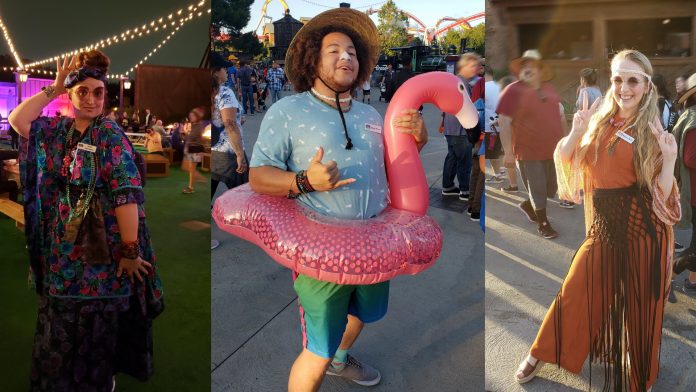 Oh, and that flamingo’s name is Geoffrey. Sandy made sure to remind us. 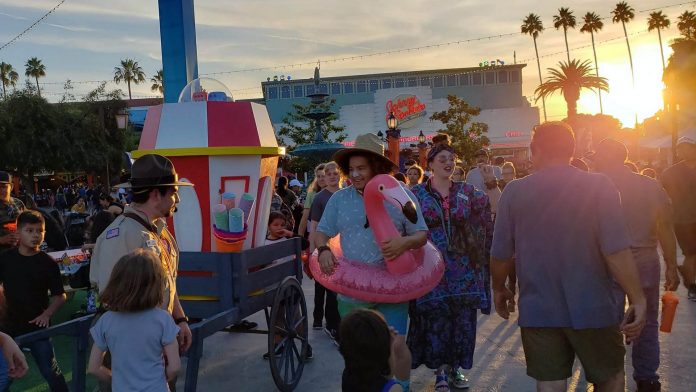 There’s something about improv actors in these kinds of events that really strikes a chord with us. They help create lasting memories and liven up trips to theme parks in ways that no roller-coaster or dark ride can. It’s also no coincidence that nearly all the cast members in Galaxy’s Edge act as if they are in a completely different universe as well. Disney seems to have finally picked up on this, as well. 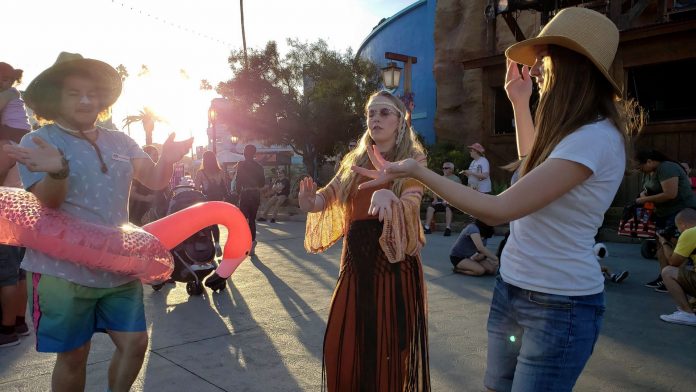 The Parallels
So, there are a few things in this event that seems very similar to something else that existed not too far down the road. During the opening night, a lot of us gathered and were walking around surprised saying “It’s Mad T Party!” When Disney California Adventure ended their nighttime show on the Hollywood Backlot, there was a void left in the community, which Knott’s was wise to notice. Even a few of the bands performing for this were favorites at  Tomorrowland Terrace. 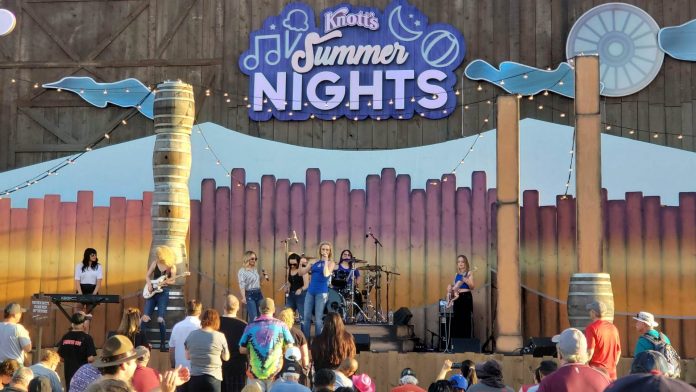 This fills that void perfectly. Knott’s usually gets more tame as the night falls. Typically during the summer, there’d be one nighttime stunt show, like bikes jumping on ramps and such, choreographed to loud music, and then afterward you’d head home. But this really incentivizes sticking around in the park.
The Conclusion
We found ourselves wanting to stick around far longer than we had anticipated. Knott’s does their best when they take risks, and this was a big gamble. Traditionally summer shows are stunt shows, or big flashy spectacles that are one-offs. A kiss goodnight. Why re-watch a stunt show when it’s going to be the same? But with this, you want to return, to try different food, to hear different music, to meet new characters, to play new games. And that’s a big deal for summer entertainment. 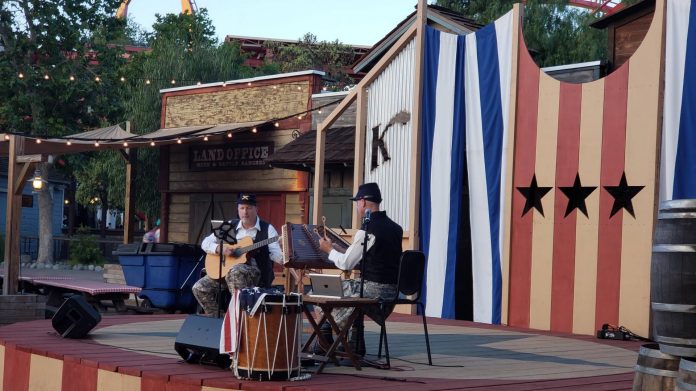 Knott’s Summer Nights is playing nightly through August 11th and is included with park admission. Tickets are available at Knotts.com. 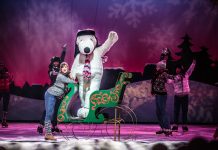 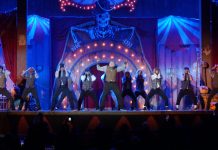