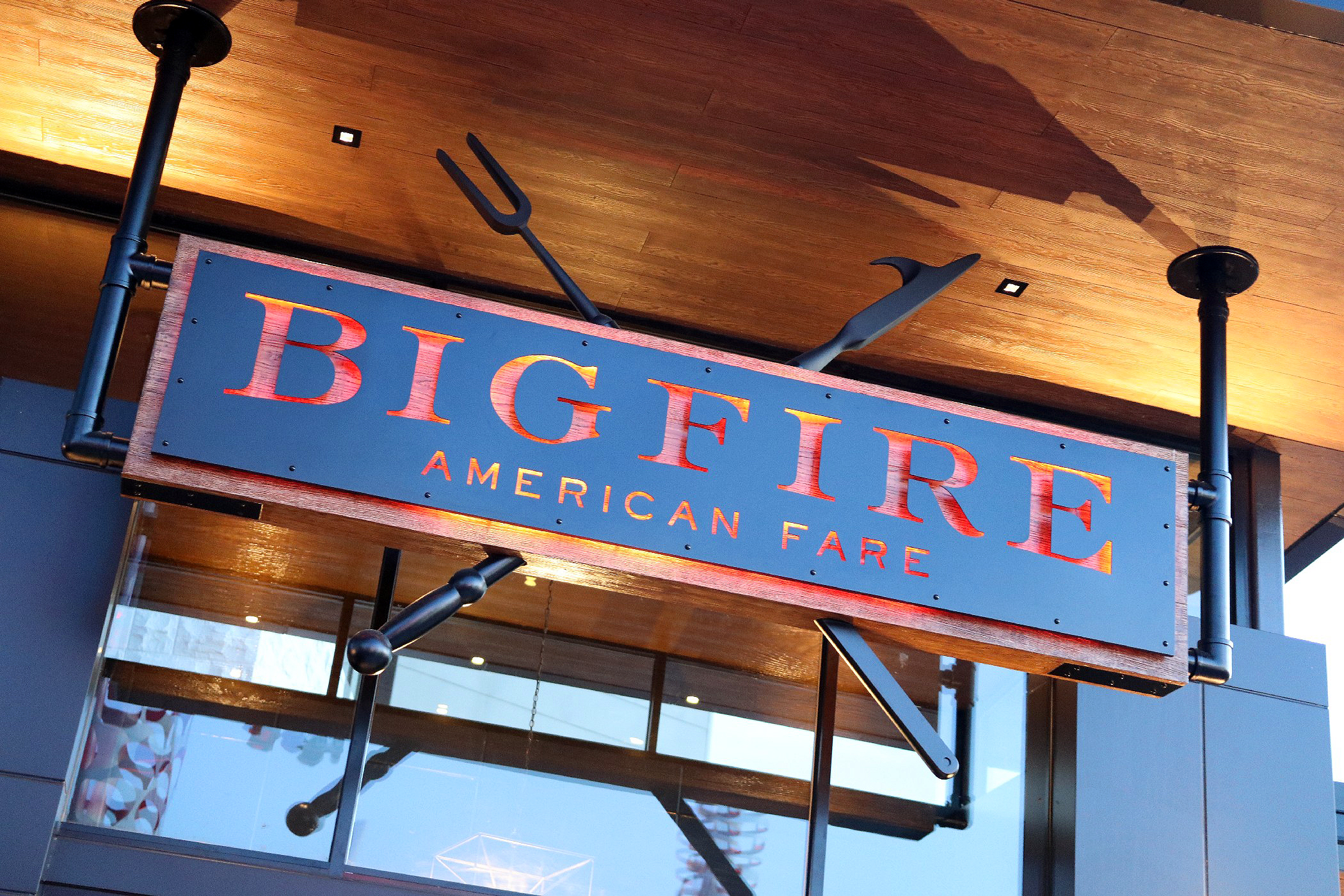 Bigfire is set to open up soon at CityWalk at Universal Orlando and the resort invited us out to tour around and sample the menu of the newest restaurant. Bigfire serves up American fare inside a building designed to look and feel like a lakeside retreat.

The two-story venue will feature natural design elements of mix and matched fabrics and seating, cast iron, twinkling lights, camp lanterns – and even a canoe suspended from the overhead rafters – to complete the outdoor ambiance inside the restaurant. The eatery is designed to have a home feel.

According to Ric Florell, Executive Vice President of Revenue Operations at Universal Orlando, Bigfire will make guests feel like they have stepped into a lakeside summer house, creating an atmosphere reminiscent of a summer evening by the water. 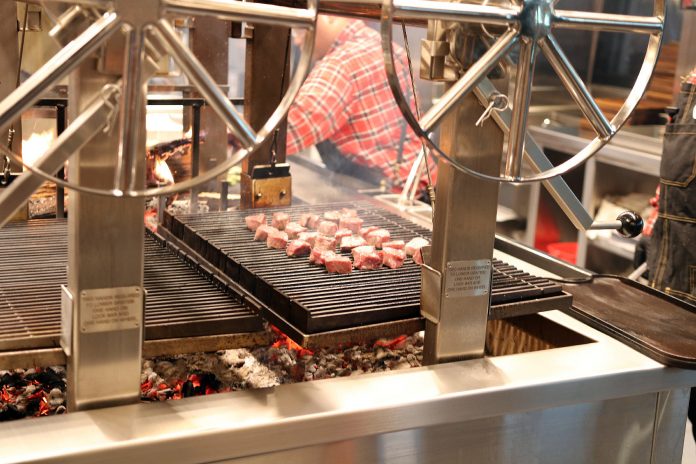 The centerpiece of the restaurant is a large custom wood fire grill, where meats and vegetables are cooked over different flavored wood chips; inspired by the style of open-fire cooking, but with a modern twist.

Chefs will prepare each dish with a different type of wood; from Cherrywood to Pecanwood and more, matching each food with wood species that have been carefully chosen based on the flavor they exude.

The menu is a bit different than what CityWalk typically offers. While it has burgers and steaks, it does feature a lot more game meats and unique dishes – extending beyond what I would call a “traditional menu”; which helps Bigfire stand out in the CityWalk lineup. We were able to sample most of the menu during our visit, with our favorites being the Bison Burger, the Creekstone Cowboy Ribeye, the Campfire Chili, and the BBQ shrimp. One dish that we couldn’t get enough of was the Pork Belly Mac & Cheese. It is offered as a side dish, but we could eat a full helping of that if it was offered.

Appetizers include dishes like Fried Green Tomatoes, Wood-charred Brussel Sprouts, and Smoked Brook Trout Dip. For entrees, dishes include Beer-glazed scallops, BBQ shrimp, Buttermilk Fried Chicken, and, of course, different cuts of steak. Bigfire also features quite a few vegetarian and vegan options, which Universal admits they have focused on introducing more dishes throughout the resort  – especially as those options have risen in demand. For dessert, the standout was the Tableside S’mores – which includes marshmallows, graham crackers, chocolate, peanut butter cups for all to share. We would not be shocked to see the dessert be one of the most popular orders, and one we see the most of on Social Media.

For drinks, the bar heavily features a whiskey/bourbon line-up, including some unique twists on Old Fashioneds and Manhattans. With Bigfire being a restaurant all about open-fire cooking and smoked flavor, it should come to no surprise that they have their own smoked beer on-tap – the Bigfire Smoked Amber.

For a full breakdown of the menu, along with prices, make sure to visit Universal’s official site.

Bigfire replaces Emeril’s Orlando, which closed last summer; marking another location that Universal has changed at CityWalk since 2013. Universal has yet to announce an opening date for Bigfire, but has said the restaurant will open “soon”.