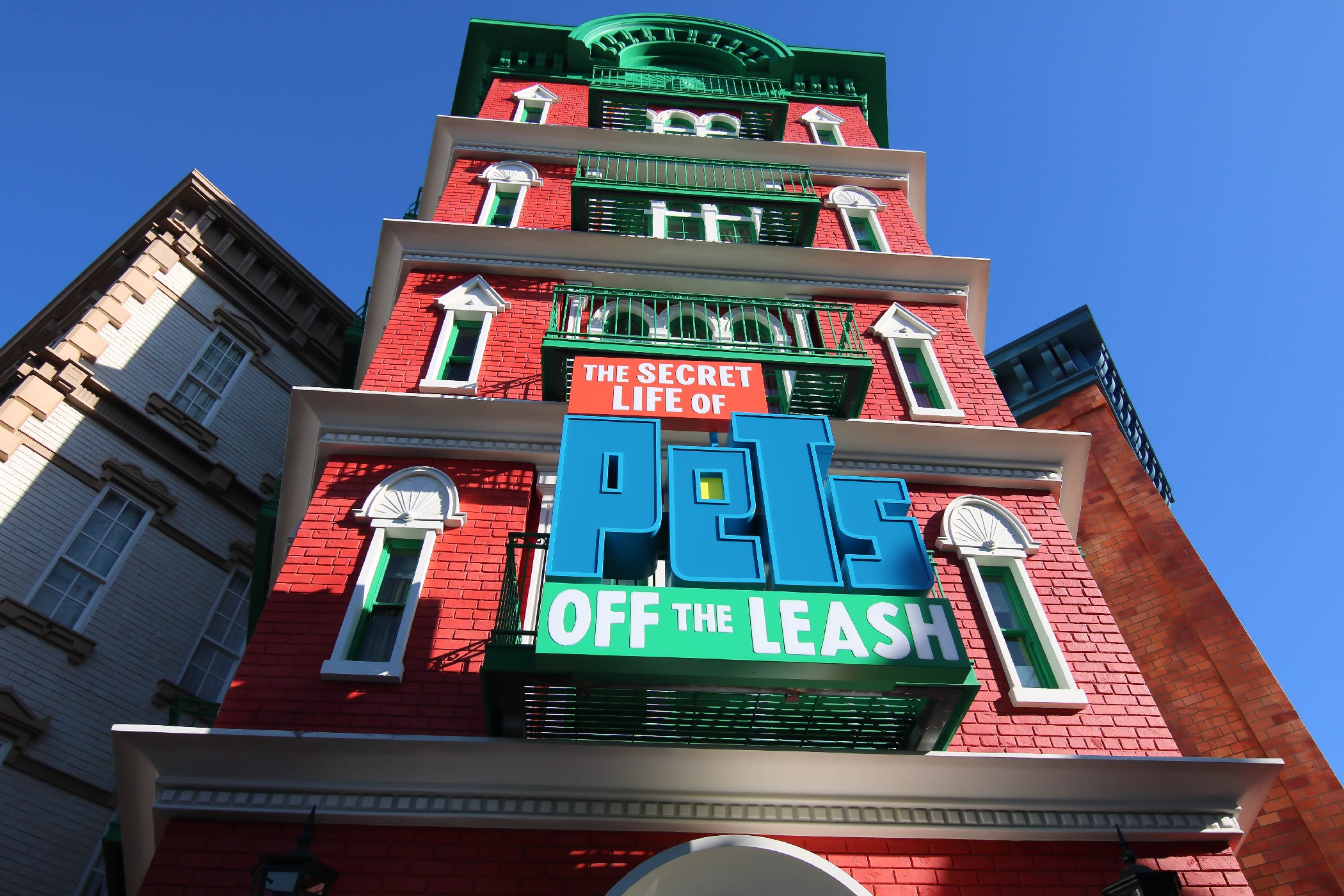 Recently, Inside Universal was invited for a hard-hat preview of the newest Universal Studios Hollywood attraction, “The Secret Life of Pets: Off the Leash!”, based off of Illumination Entertainment’s hit franchise of the same name.

Unlike many of Universal Creative’s recent attractions, this ride featuring a flexible omnimover (constantly-moving) ride system primarily consists of practical sets and elements, with little media used. A grand total of 64 animatronics bring the cute and cuddly characters voiced by their same respective actors from both of The Secret Life of Pets films – including Max, Snowball, Buddy, and Gidget – to life for audiences of all ages to see and enjoy.

Guests enter the ride through the doors of a red and green building reminiscent of the main apartment building from the film, after obtaining a return time through the virtual queue system, which allows guests to enjoy other experiences at the park instead of waiting in an actual line. However, the queue for the attraction is still able to hold up to 20 to 30 minutes of wait time. 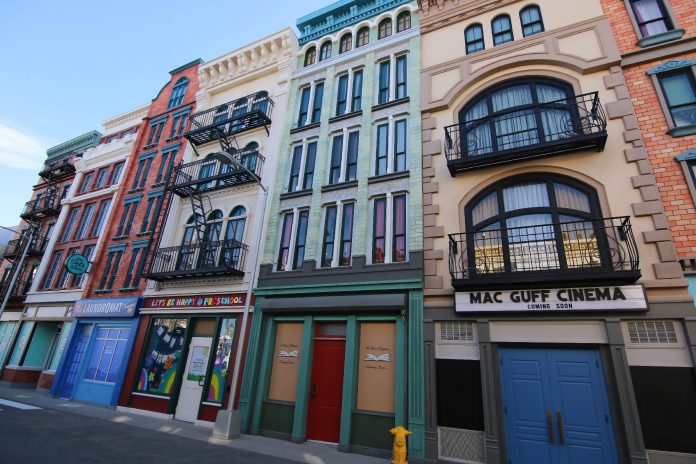 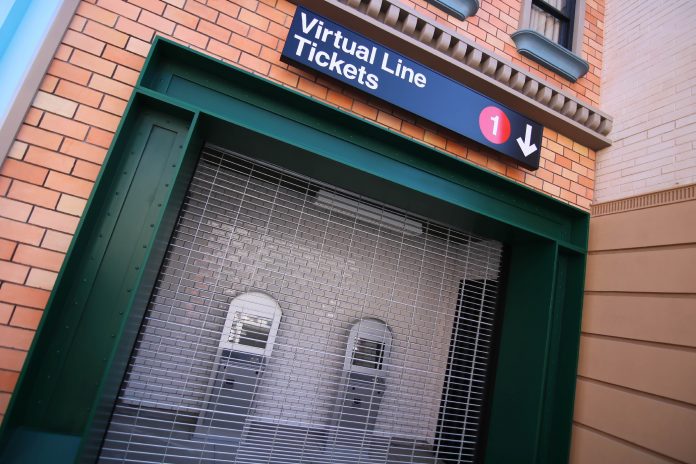 For those curious about the floor plan of the building, the first floor houses most of the queue and retail, while the attraction solely takes place on the upstairs level. Though we were only able to catch a slight glimpse of the actual ride itself, our tour walked us through the length of the general queue, themed to feel as though guests are venturing through an actual apartment building.

Following Universal’s recent trend of creating captivating and interactive queues, there is no shortage of entertainment for guests of all ages waiting in line, despite how short those wait times will likely be. Each room is rich with details, from dachshund bookends on the bookshelf in the apartment where Buddy the dachshund gets a massage from a kitchen mixer to full-scale animatronics of the Pets themselves at guest level, and even to recurring appearances of Norman the guinea pig and a dust bunny in the building’s faux ventilation system. 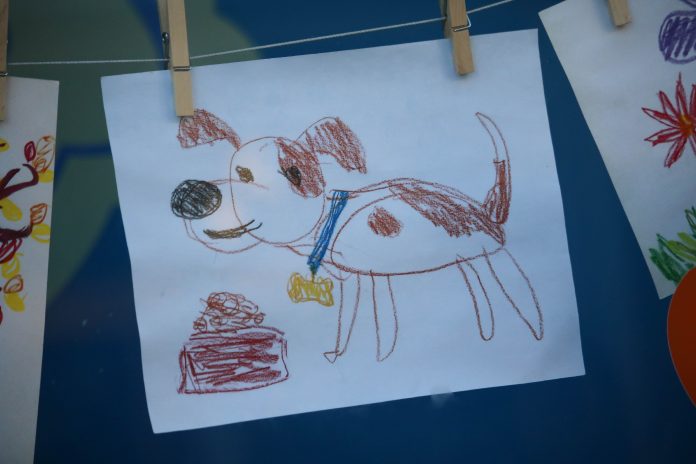 Guests are not only welcomed, but encouraged to take their time as they walk through the queue, not just to take in the infinitely numerous details, but also to view the multiple brief preshows featuring a number of recognizable characters from the films. A mixture of state-of-the-art animatronics and media creates a unique experience unlike any other at Universal Studios Hollywood, most comparable to the queue of “Race Through New York Starring Jimmy Fallon” at Universal Orlando Resort, though also strikingly different.

After their first interaction with Max and Duke in the queue, guests arrive at loading, where they will board ride vehicles themed to look like cardboard boxes, before being transformed into pets themselves to join in on the adventure. Vehicles can hold up to two guests satisfying the height requirement of 34”, with individual lap bars designated for each seat. Though guests will be whisked through many familiar settings from the franchise, overall, from the beginning of the experience to the very end, it is clear that the characters will be at the true heart of the story taking place at no particular time before or after the films. 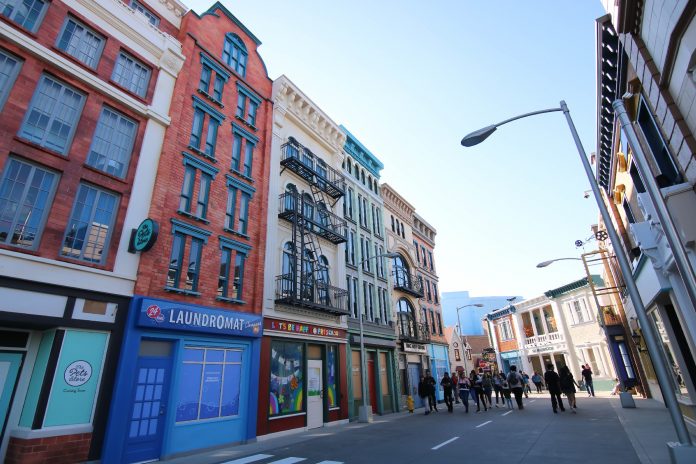 Without revealing too much else, we can assure you that though the ride may not be intended to be a blockbuster of theme park attractions, it will greatly help to broaden the park’s limited attraction roster. The Secret Life of Pets: Off the Leash! is, simply put, a fun experience for the entire family to enjoy. As cliché as that may sound, we believe that it will be another major step forward for Universal Studios Hollywood, whose attraction count has always been lacking in family-friendly experiences geared toward young children. The ride undoubtedly fits in with Universal’s current vision of future growth, and with that, we look forward to experiencing the full attraction for ourselves. 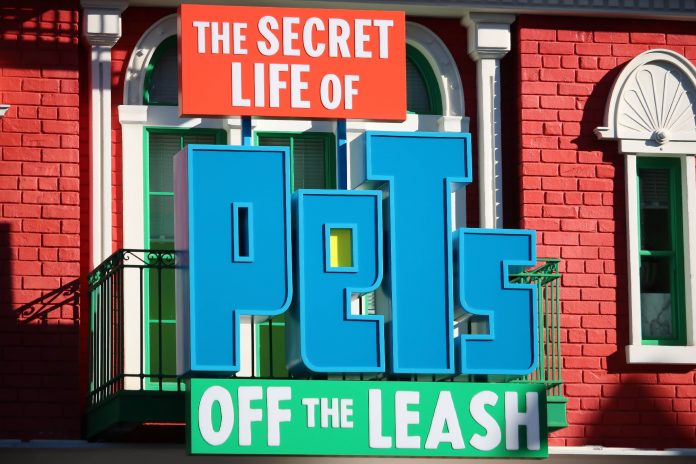 Again, we wholeheartedly thank Universal for inviting us to for a sneak preview of The Secret Life of Pets: Off the Leash!, which will be officially opening to the public on March 27.