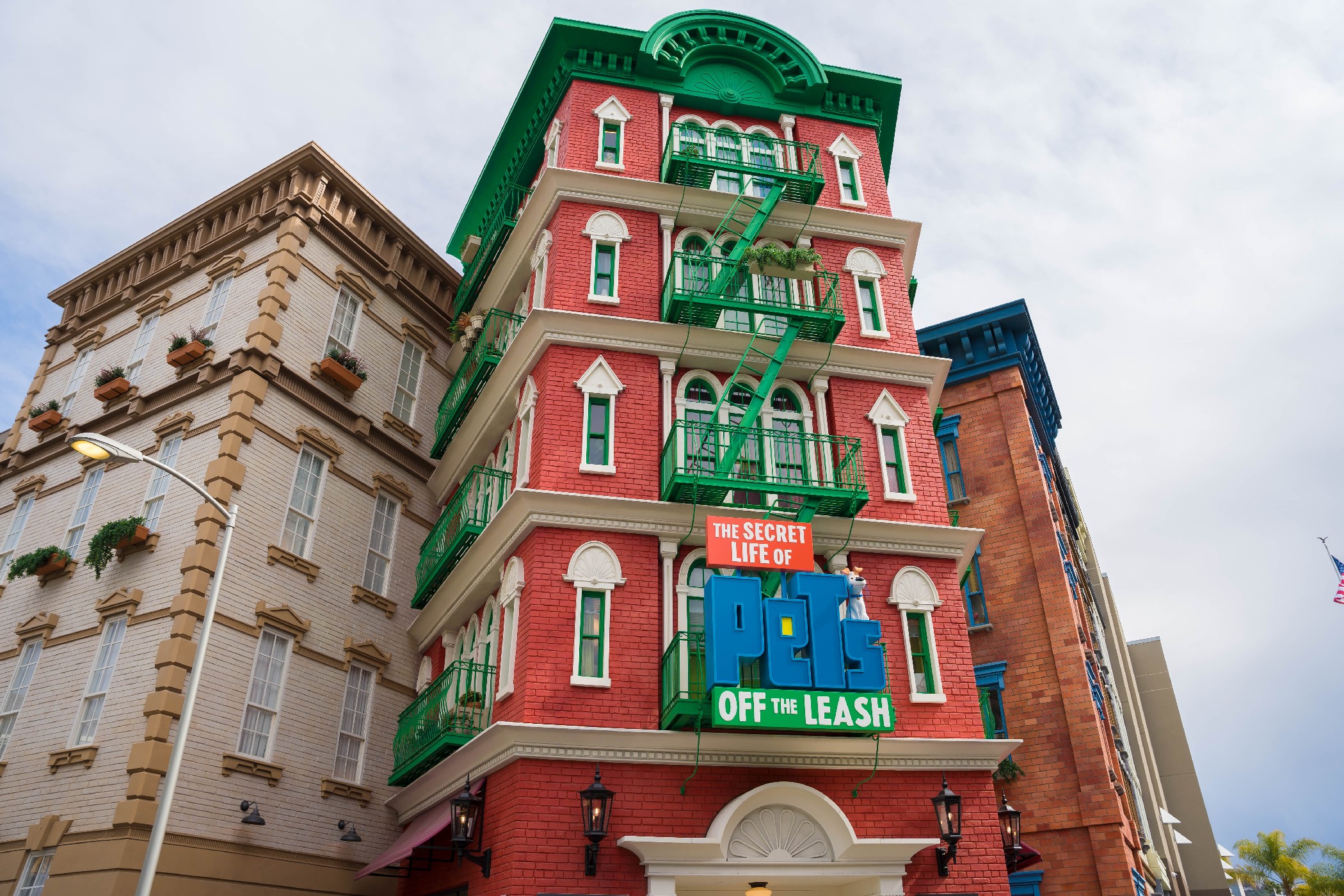 With the opening of Universal Studios Hollywood’s Taste of Universal event came the reveal of the now-completed Pets Place area. Taking the place of Baker Street in the park, Pets Place brings to life the cartoonish, vibrant New York City from The Secret Life of Pets films with colorful storefronts and detailed apartment windows all leading up to the entrance of The Secret Life of Pets: Off the Leash! ride, with its exterior themed to look like the main apartment building from the films. 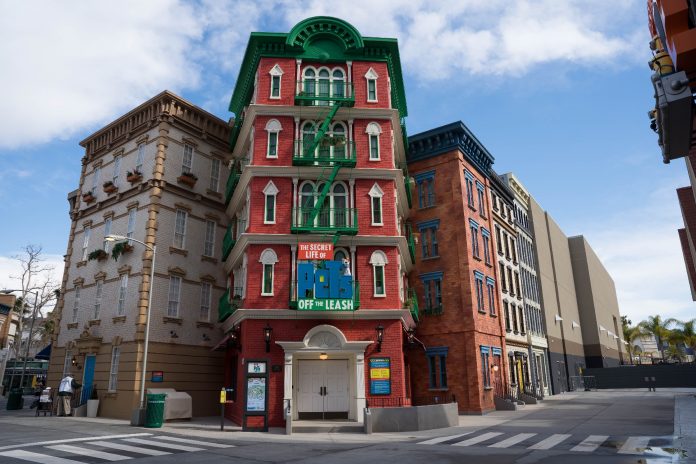 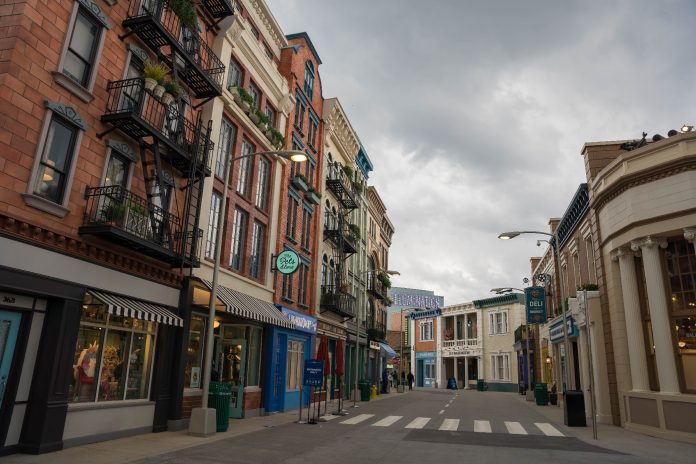 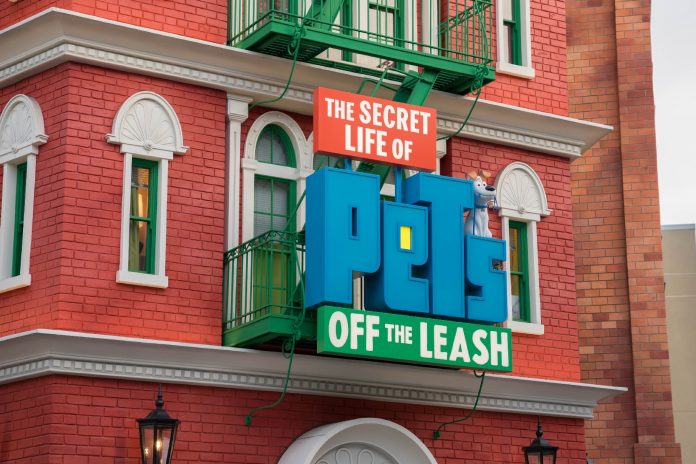 Although The Secret Life of Pets: Off the Leash! has yet to open as attractions at the park remain closed at this time, all walls have come down in the surrounding area, revealing the many details laced within the storefronts lining the street. Just over a year ago, Inside Universal was graciously invited for a hard-hat preview touring the queue of the ride, which begins as guests enter through the doors of the red and green apartment building into the lobby. Since the ride will primarily use a virtual queue system that gives guests a return time to ride, it will not be necessary to wait in an actual line for long, though those who do choose to wait in standby will get the chance to take in the details found within each room of the queue designed to look like the inside of an actual apartment building. 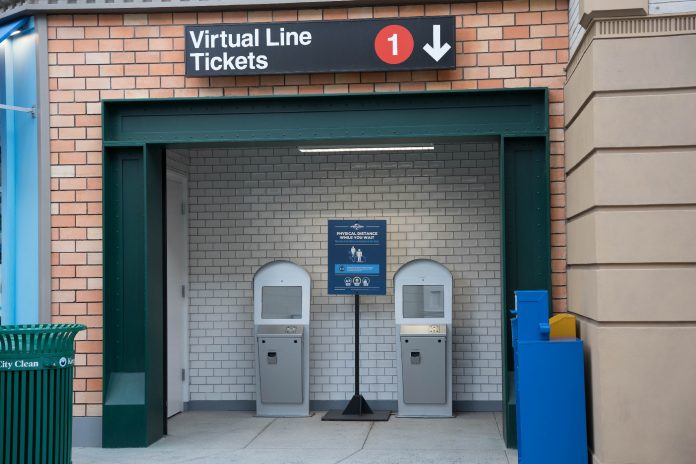 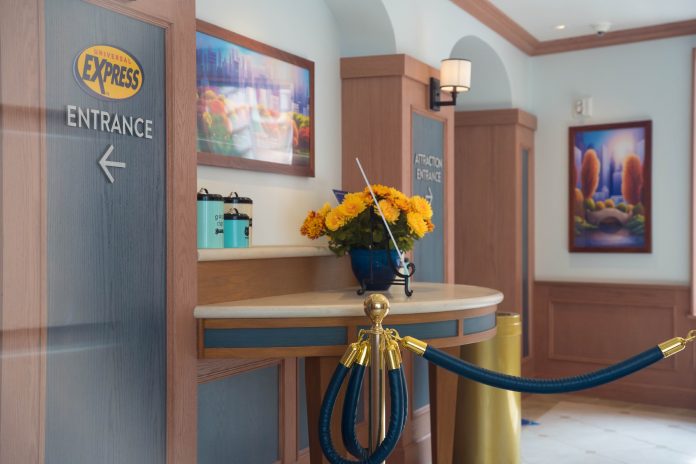 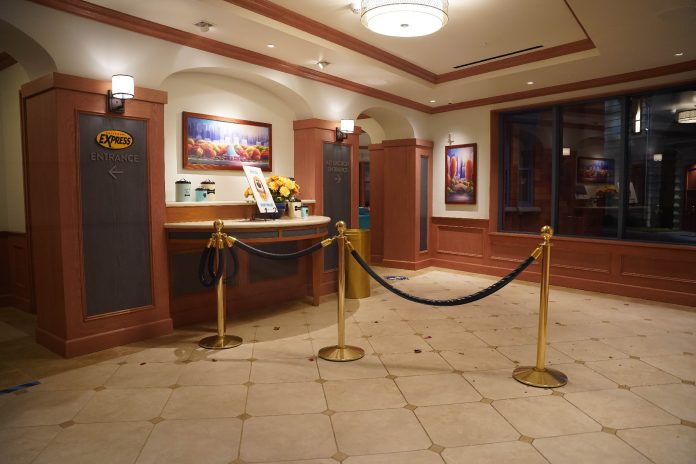 Beyond the ride itself, Pets Place also includes the new City Snack Shop, where it appears that guests will be able to purchase both sweet and savory treats – including crepes and beignets – if the location’s Taste of Universal menu is any indicator of what options it will offer upon full park opening. City Snack Shop has replaced the in-park Cinnabon and received a predominantly green and yellow paint job last year similar to Mulligan’s Irish Pub down the street. 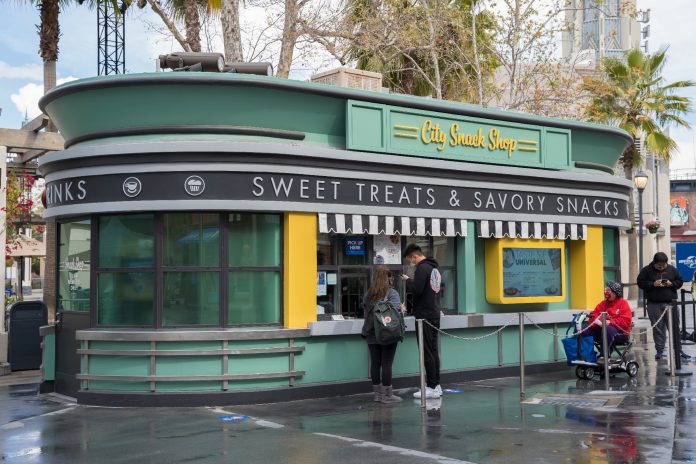 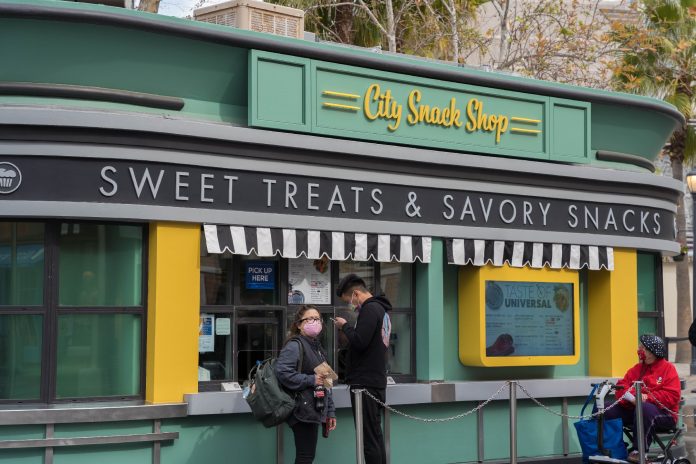 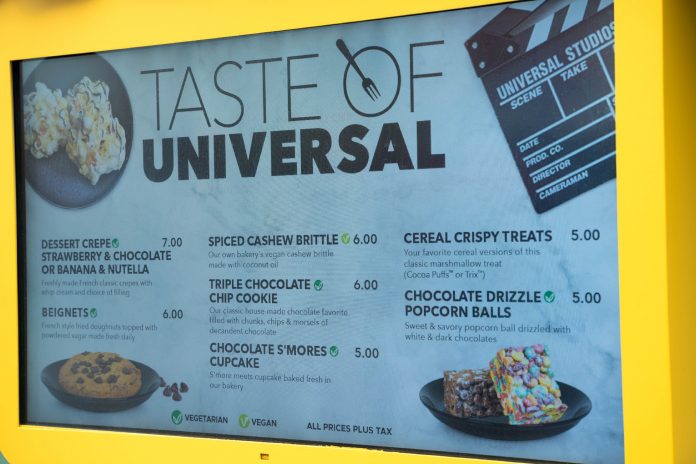 The ride will also exit into a gift shop called The Pets Store, which offers a variety of The Secret Life of Pets merchandise, including an Adopt-a-Pup option that allows guests to take home their own stuffed animal dog with add-on accessories, if they please. The Pets Store briefly opened just before the park closed last year and is now currently operating during Taste of Universal event hours. 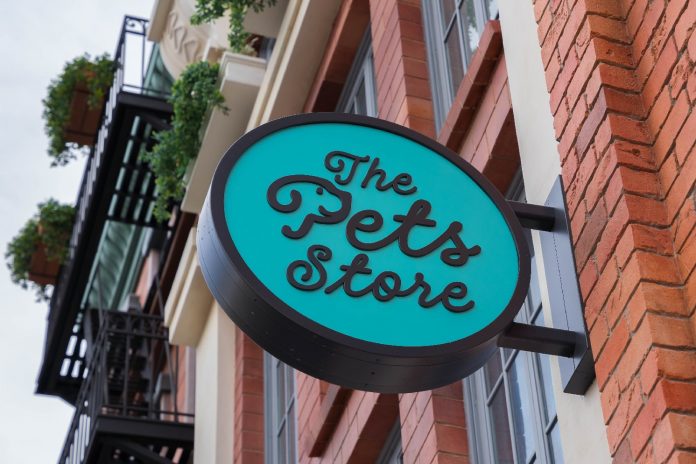 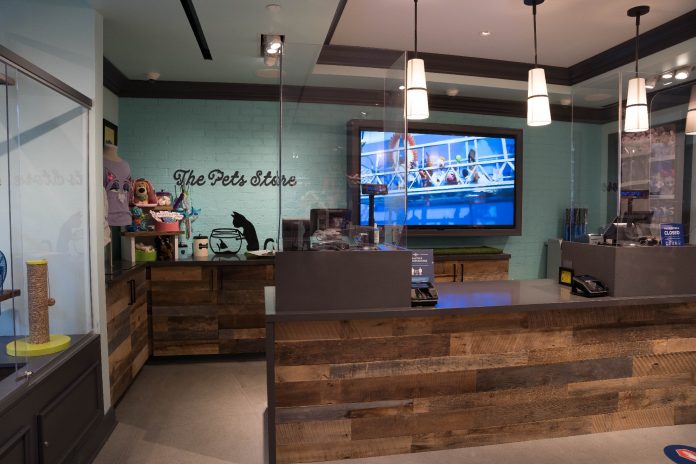 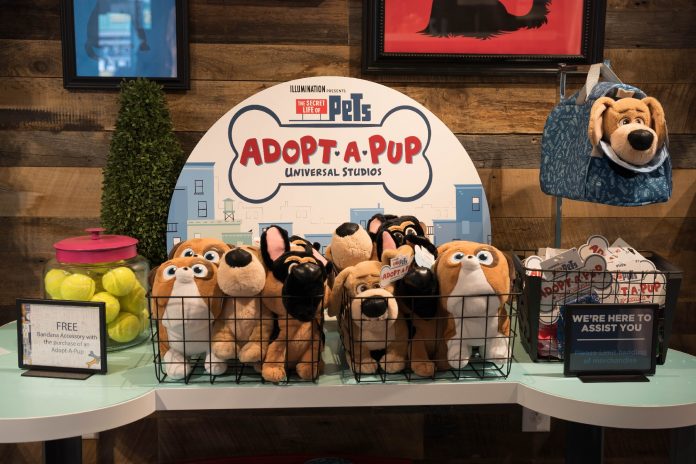 Most other storefronts lining both sides of the street are purely decorative, though certainly add to Pets Place with their many fine details. Magazine covers and advertisements based on the films can be found in the land’s grocery store exterior, including one for The Pets Store itself. Children’s drawings hang on a clothesline above cubbies filled with lunchboxes in the preschool, with Max himself making an appearance in the centermost picture. A laundromat, movie theater, bookstore, newspaper stand, and subway station (where guests will pick up their virtual line tickets) can also be found on the left side of the street along the show building for the ride when one is facing Despicable Me: Minion Mayhem. Up above in the apartment windows are an assortment of regular household items, including lamps, animal-themed board games, and other subtle touches that add life to the street. 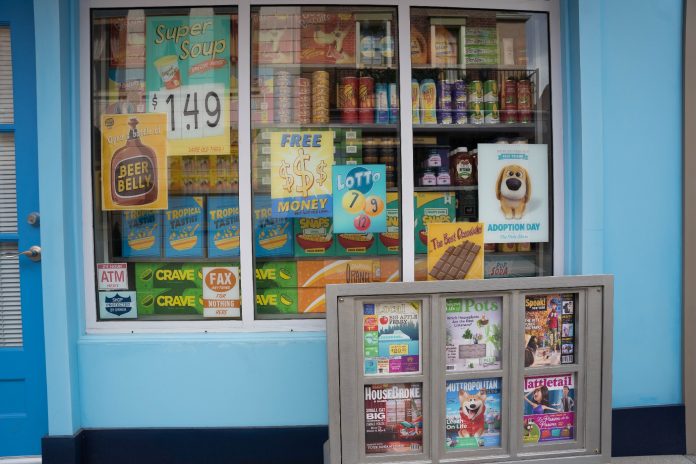 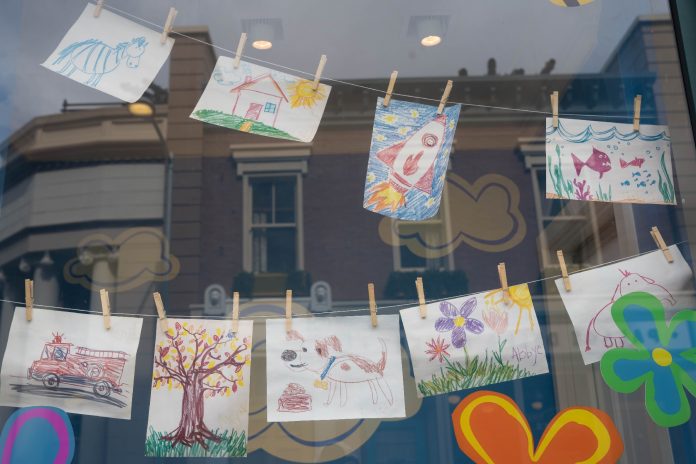 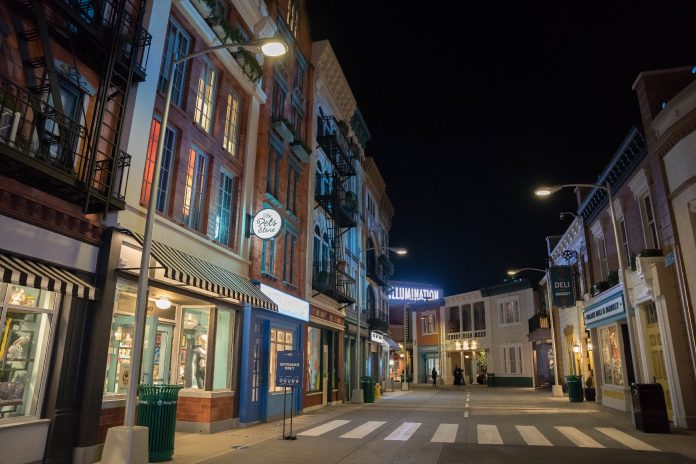 Across the street, there is also a bike store, guest restrooms, a toy shop, and the Palace Deli and Market grab-and-go location. Guests with a keen eye may also notice on the corners of some storefront windows a sticker that says “Protected by Cyberdyne”, in reference to the menacing security company of the same name (Cyberdyne Systems) from The Terminator films, and specifically Terminator 2: 3D – the attraction that formerly occupied the nearby location of Despicable Me: Minion Mayhem. 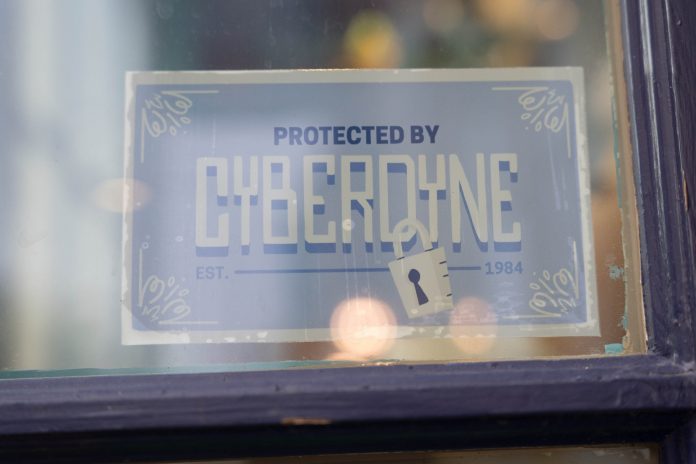 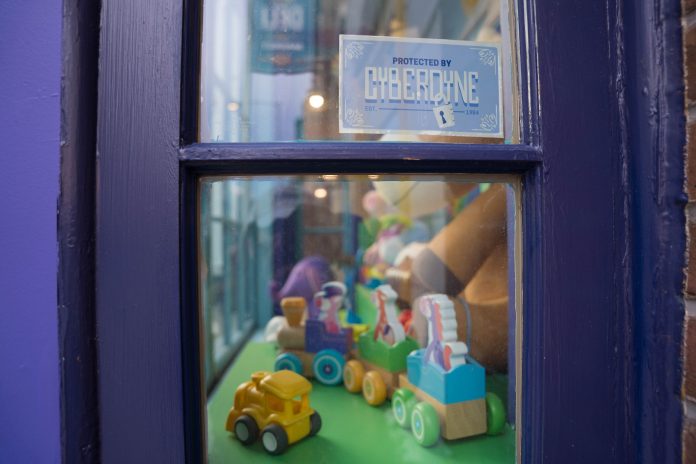 Following its closure in March 2020, the location of The Walking Dead Attraction appears to have been temporarily absorbed into Pets Place with its new paint job and theming to look like the entrance to a city subway station, though Universal has not yet shared their plans for the future of this attraction. 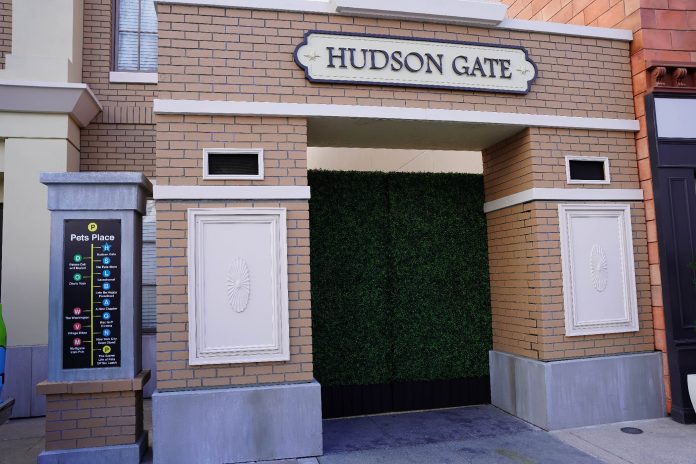 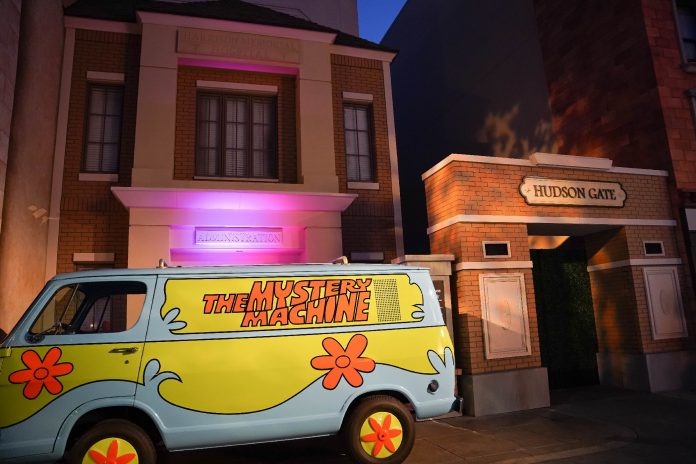 As fans may recall, the introduction of Pets Place and The Secret Life of Pets: Off the Leash! reflects Universal Studios Hollywood’s current vision of future growth oriented toward producing family-friendly experiences that even young children can enjoy. While the park’s year-long closure has definitely shaken up predetermined plans, we have no doubt that Pets Place and all it has to offer will make a fantastic addition to the theme park and cannot wait for the full experience to open someday. 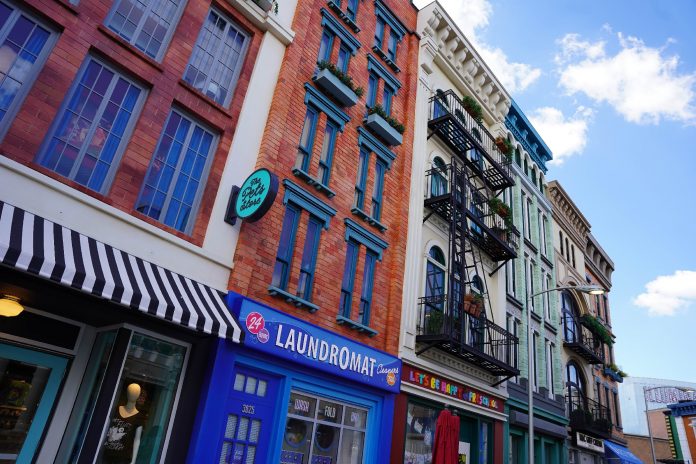 Below, you will find some additional photos of Pets Place from our recent visit. As always, stay tuned to Inside Universal for all the latest on Universal Parks & Resorts.