Today, Nintendo held a Direct presentation centered around Universal Studios Japan’s upcoming Super Nintendo World, giving us an up-close look at some of the elements that will be featured in the highly-anticipated new land.

The 15-minute presentation was hosted by Shigeru Miyamoto, famed game designer and game director at Nintendo, and creator of Mario. Miyamoto showcased most of the land, while still keeping some of the more anticipated attractions and features under wraps. 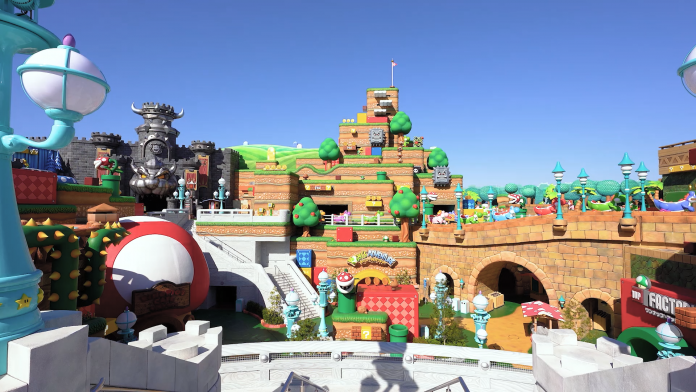 First up, Miyamoto showed how we’ll transition into the Mushroom Kingdom by way of the iconic Warp Pipe. He explained that they tossed around many ideas, but went with a traditional transition as they didn’t want the Pipe to be an attraction in itself. From there, he entered Peach’s Castle lobby, featuring familiar sights and sounds from Super Mario 64.

The biggest showcase was how the Power-Up Bands will work throughout the land. To play, guests are can download the Universal Studios Japan app to your smartphone and link it with the Power-Up Band. Each band will be priced at ¥3,200 (tax incl.) and will work like Amiibo at home. Miyamoto highlighted how the “?” blocks accumulated virtual coins, and earning virtual keys with one of the interactive activities where guests have to time hitting a Koopa shell with a POW block. Collecting virtual coins and keys will eventually unlock other activities that will lead to a battle with Bowser, Jr. 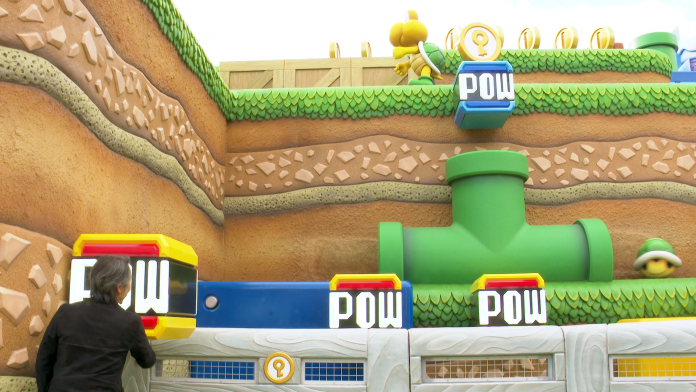 In addition, it seems there are certain symbols that will trigger hidden easter eggs or effects if you wave your Power-Up Band in front of it.

One of the areas Miyamoto explored was an “underground level” filled with Bob-ombs and other surprises. One of the coolest effects they showcased was simulating how Mario shrinks from big to small with the use of a simple optical illusion (You can see it in the video by going to the 6:45 mark).

Mario and Luigi had a brief cameo, showcasing that the Meet & Greet characters will have articulated faces, with blinking eyes and moving lips – a first for Universal Parks.

Miyamoto continued the tour by taking us to Kinopio’s (aka Toad’s) Cafe. The restaurant is helmed by Chef Toad, and guests can see other Toads in interactive windows prepping “mushroom dishes”. The food featured was specifically designed for Super Nintendo World, including the Mario Burger and the Super Mushroom Pizza Bowl. Miyamoto also gave a quick glimpse of the Super Star popcorn bucket – which will feature Caramel Peach and Mushroom flavors.

We also got a quick look at The 1-UP Factory, which features merchandise for Super Nintendo World – including a Tokotoko Mario, which was designed by Nintendo themselves.

The best part of the whole tour was how Miyamoto’s face would light up when he would come across certain visual or interactive elements, just like a kid in a candy store.

Sadly, we didn’t get any additional looks at the land’s 2 attractions – Mario Kart: Koopa’s Challenge and Yoshi’s Adventure.

To watch the entire tour, you can see the video below: