Universal Orlando has officially opened Jurassic World VelociCoaster, one of the most anticipated attractions at the Resort in recent years.

The new attraction lets guests go on a “Raptor Run”, a high-speed chase alongside a pack of Velociraptors on the hunt – reaching speeds up to 70 mph and reaching heights of 155 ft into the air. 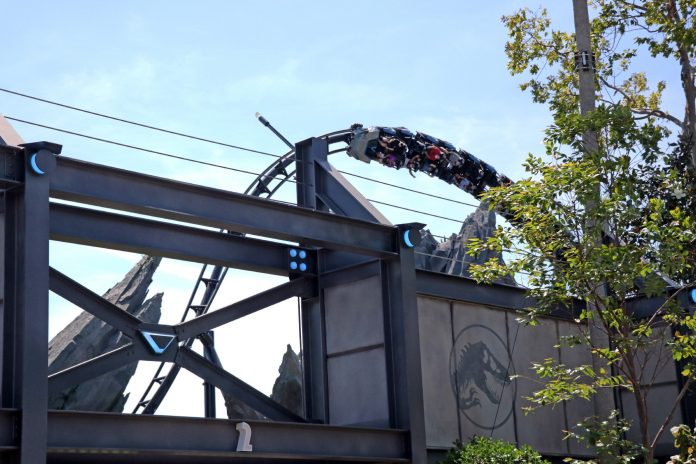 Universal Orlando kindly invited us out the day before the opening to get a few more rides on the attraction, including a sampling of the new food items they’ve introduced around Jurassic Park.

It’s been a little more than a month since we initially rode the roller coaster during previews and the attraction has continued to receive nothing but high praise. You can read our review here, but our thoughts remain the same: it lives up to the hype and is truly a one-of-a-kind coaster.

Of course, one of the biggest stories during the construction of the VelociCoaster was the COVID-19 pandemic. When speaking with Gregory Hall, Art Director of Jurassic World VelociCoaster, about how it impacted the design process, he said things kept moving forward and stayed on track which helped built up a lot of trust within the team. “It was an eyeopener, a testament to the team,” Hall said. “It was confusing times” he continued, “but everyone believed in the attraction.”

The opening of the VelociCoaster also brings the world of Jurassic World to life, officially merging with the existing Jurassic Park area in Islands of Adventure. Hall states, “it’s not just about the essence of Jurassic Park or World, it’s about the Jurassic franchise as a whole.”

As the coaster opens, Universal is also introducing a slew of new options for guests in the culinary world. Each restaurant in Jurassic Park has gotten a new item. Burger Digs has the Casado Burger, which includes a black Angus patty, sweet plantains, avocado, pork belly, garlic mayonnaise on a raptor scored brioche bun. Chef Robert Martínez Jr., Research and Development, says the name Casado comes from the Spanish word – married – and the Casado Burger is a “marriage of flavors”. Over at Thunder Falls Terrace, you can try out the Prehistoric Wing Platter, which features Chargrilled chicken wings marinated with olive oil & spices then tossed in a sweet chili chimichurri served with cilantro lime rice, black beans, and plantain chips.

Guests can also grab an Island Nectar Refresher in Coca-Cola Freestyle machines, which is a mix of strawberry lemonade, Hi-C orange, and peach Sprite – which tastes similar to a mango/guava soda.

From the Churro Stand Donut at Voodoo Doughnut to the Dig in Jar over at Tribute Store, if you’re looking to satisfy your sweet tooth, Universal is offering a whole range of options.

Jurassic World VelociCoaster is the next exciting addition to Jurassic Park at Universal’s Islands of Adventure, including Jurassic Park River Adventure and the Raptor Encounter, where guests can test their bravery and get up close to Velociraptor Blue and the newest additions to the paddock – ferocious Velociraptor Bravo and baby raptors, Sierra and Tango.