After months of waiting, Universal Orlando finally gave guests their first previews of the Jurassic World VelociCoaster. The new attraction lets guests go on a “Raptor Run”, a high-speed chase alongside a pack of Velociraptors on the hunt. Construction began on the coaster back in 2019 and has been followed pretty heavily by fans waiting to see what Universal had to offer next in their line-up.

Universal was kind enough to invite us out Monday morning to experience the VelociCoaster as many times as we wanted, and we made sure to take advantage of that.

So what did we think?

It lives up to the hype and has become my favorite roller coaster in Orlando. While my coaster credential resume isn’t extensive, I feel confident that I can tell when a good ride is a good ride – and this is an excellent one.

Billed by Universal as the “new apex predator of coasters”, it certainly lives up to its name. The coaster is relentless, giving guests twists, turns, speed, and airtime – packing a pretty intense punch. Universal is touting that the coaster offers “12 heart-pounding seconds of airtime” and it honestly seems they are underselling it – which by no means is a complaint. 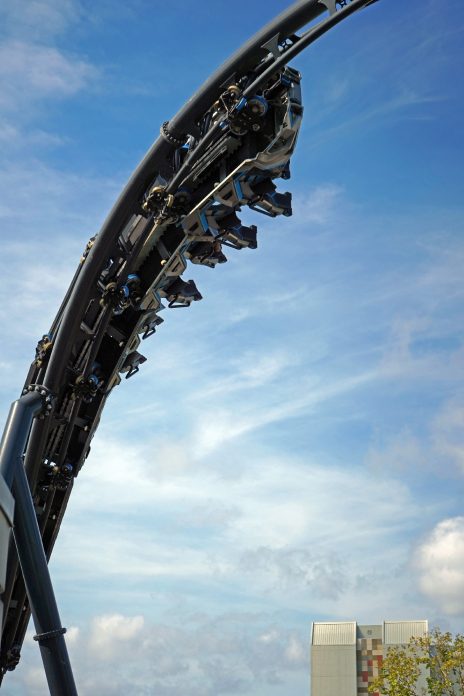 “But Inside Universal,” you say, “how does VelociCoaster fit in thematically with Jurassic Park?”. Ignoring that Jurassic Park is first and foremost, a theme park, they could add whatever theme park ride it wants, but the story behind the VelociCoaster is actually pretty clever. To “push the limits” of their animal encounters, Jurassic Park is adding the “next big thing” with the addition of a roller coaster that takes guests through the velociraptor paddock – despite the disapproval of raptor trainer and animal behaviorist, Owen Grady (Chris Pratt).

What sets this apart from other coasters, in our opinion, is that it’s a well-themed experience with a top-notch roller coaster. After several rides, we found the front row to be our favorite and might be the best row for those who are wary of the intensity of the coaster. 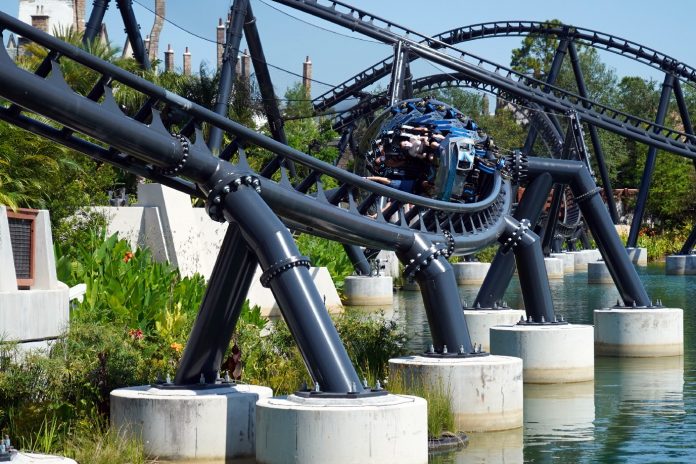 As you enter the first launch, you’ll be flanked on each side by 2 raptors – hungry, agitated, and ready to hunt. The vehicle begins to “power up”, as the room starts booming with bass and mist filling the air. Owen starts yelling over the screeching raptors to hold on and remain seated as you’re suddenly hauling ass into the coaster’s first element – an Immelmann loop.

The 360-degree barrel roll right above the Islands of Adventure lagoon, dubbed the Mosasaurus Roll, will be the most talked-about feature in my opinion, especially if you experience it in the back row – which offers a full-on gut-punch and offering the best airtime experience.

The waterfront has been completely transformed to match the aesthetic of the modern look of the Jurassic World franchise, full of greys and blues; offering plenty of great views of the coaster as it makes its way through the back half of the coaster experience.

While the queue isn’t as extensively themed as other recently opened attractions, it fits the coaster well and it does offer some pretty awesome moments during the wait. The lighting package in the first room syncs up with the coaster, flashing red as the coaster makes its way down the top hat – indicating that raptors aren’t too far behind.

Guests will also be able to see the launch into the top hat from inside the queue, which features a really clever effect of the raptor pack chasing the ride vehicle. The window offers 6 different variations of the chase, so your queue visit may vary.

The most impressive part of the queue is the Raptor restraint station, featuring Delta and Echo raptor animatronics, which feel so lifelike due to their subtle eye & mouth movements. Occasionally, you’ll also be able to feel their breath. 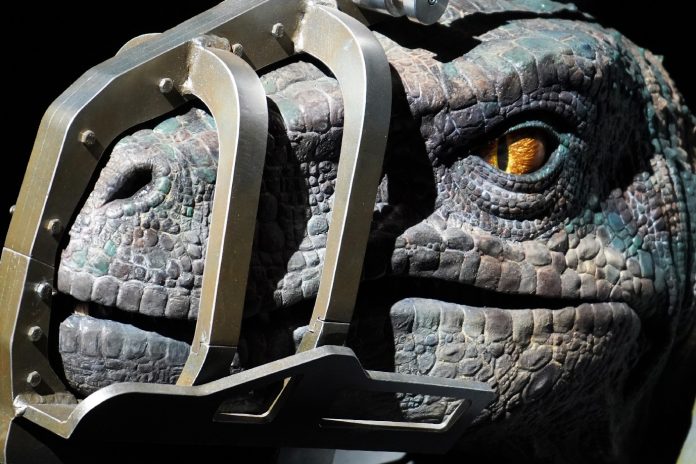 Also, make sure to keep a lookout for some easter eggs in the queue, including a couple of books written by Dr. Alan Grant and Dr. Ian Malcolm.

Something that will set the VelociCoaster apart from other rides is the locker system, which now allows you to take your belongings throughout most of the queue before stowing them away right before you enter the loading station.

The way it works is actually pretty simple and ingenious. The lockers are coded by dinosaur icon, color, and number. Right as you enter the locker area, it works just like any other locker system at Universal – you scan your ticket, a locker is assigned, and you put your stuff away. What sets it apart is that you’ll pick up your belongings after your ride in a separate room that is connected to the lockers. The best way to explain it is to share this diagram from @tommyhawkins:

As its almost #VelociTime this how i believe the Stand-by /Express Double-Sided Lockers will work on #Velocicoaster. this is1st floor below Track. come in from queue, place items in lockers, then go round upstairs to 2nd floor for little bit more queue, before the load… pic.twitter.com/YQquWgefMX

Due to this change, guests can now photograph, film, tweet, TikTok, etc.. all these aforementioned queue experiences while they wait in line. Be forewarned though, you’ll want to make sure that you put away all that you can inside the locker outside the park ticket you used to rent it because there is a very good chance you will lose whatever is in your pocket. 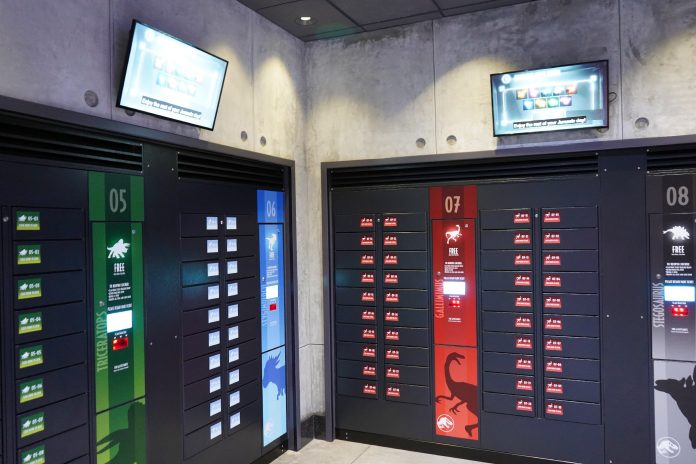 As you make your way into the queue station, you’ll see a video of Owen bickering with Park Operations Manager, Claire Dearing (Bryce Dallas Howard), about how dangerous the idea of a coaster inside a raptor paddock is. The loading area offers an awesome view overlooking the paddock, where you can see all the rockwork, foliage, and twisted steel you’re about to experience.

Another tidbit worth mentioning is the lap bar restraint allows the coaster to be “large mammal friendly”. There are several test seats set up that will allow you to see if you’ll be able to set the restraint safely into place. If the light turns green, you’re good to go!

One question I’ve been asked a lot is how does it compare to Hagrid’s Motorbike Adventure, and to be honest, I don’t think it’s fair. While they are both coasters, Hagrid’s is more focused on the storytelling aspect. With the VelociCoaster, it’s a pure thrill coaster through and through that just so happens to have a story tied into it. 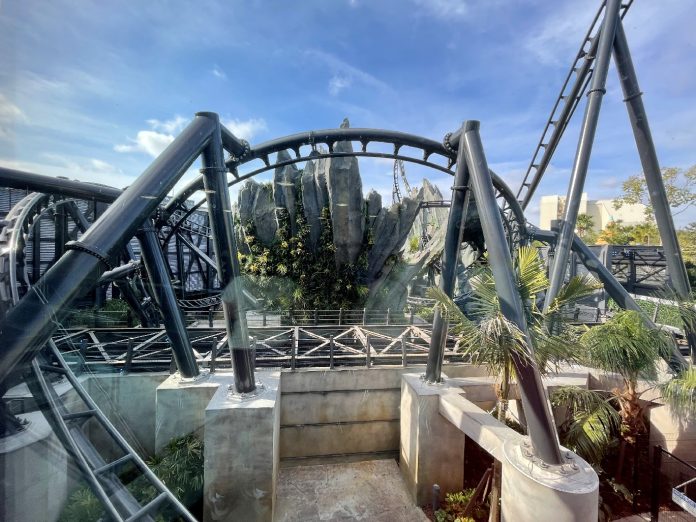 With VelociCoaster all but open, it joins a stellar line-up at Islands of Adventure, making it a must-do for any Orlando visit, especially this summer. Following the opening of Hagrid’s Motorbike Adventure and the Bourne Stuntacular over at Universal Studios Florida, Universal is riding on a hot streak, bolstering the strength of their offerings at the Resort as they begin to shift focus on their new park, Epic Universe.

It bears repeating that this is truly a one-of-a-kind coaster in Florida and I wouldn’t be surprised to see it end up on a lot of top 10 lists for not only theme park attractions but coaster enthusiasts lists.