Here’s a look around at what’s happening at Universal Orlando and Universal Studios Hollywood, from November 28, 2022, to December 4, 2022.

The Holidays at Universal Orlando are running daily through January 1, 2023. Guests can experience Christmas in The Wizarding World of Harry Potter, Universal’s Holiday Parade featuring Macy’s, and Grinchmas. For more information on this year’s event, read here.

Revenge of the Mummy at Universal Studios Florida is still in Technical Rehearsal and may operate on a limited, unscheduled basis. There is no word as to when the ride will “officially” reopen.

Dudley Do-Right’s Ripsaw Falls at Islands of Adventure is down for refurbishment for an unannounced length of time.

Waturi Beach’s Wave Pool at Volcano Bay will be closed starting November 29 until December 11; however, access to Waturi Beach will still be available.

The Holidays at Universal Studios Hollywood are running daily through January 1, 2023; with the return of fan favorites “Christmas in The Wizarding World of Harry Potter” and “Grinchmas”. For more information on this year’s event, read here.

No refurbishments are scheduled for this week. 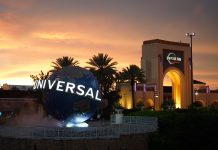