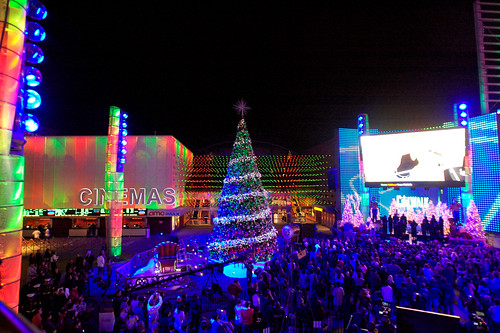 The U.S. Marine Corps., Santa Claus and the 80th Annual Hollywood Christmas Parade Help “5 Towers” on CityWalk Ring in the Holiday Season with Hundreds of Thousands of Glistening Lights and a Gigantic Christmas Tree to Benefit “Toys for Tots”

The U.S. Marine Corps., joined by Santa Claus in conjunction with the Hollywood Christmas Parade , helped “5 Towers” on Universal CityWalk celebrate the festive holiday season as the new high-tech, outdoor concert arena came alive with the sights and sounds of cheerful holiday music, choreographed in unison to hundreds of thousands of twinkling LED lights illuminating the venue, for the debut performance of CityWalk’s “Holiday Lights Spectacular.”

The event benefited the U.S. Marine Corps. “Toys for Tots” program, and Universal CityWalk will make a donation of toys to the drive.

Holidays at CityWalk will continue through Dec. 31 and admission is free. The Hollywood Christmas Parade airs Dec. 12 on the Hallmark Channel.