This year, Universal Orlando Resort will debut more adventure, excitement, laughter and awe-inspiring moments than ever before – making 2012 an extraordinary year to be here.

There will be something for everyone and every family.  From a new Blue Man Group show and newly re-created experience inside one of Universal Orlando’s most popular attractions to a stunning parade, spectacular nighttime show and brand-new blockbuster attraction based on an incredibly popular film – Universal Orlando Resort is bringing guests more new entertainment across our entire destination in 2012 than during any other year in our history.

The new experiences will begin debuting in February.  Guests will discover the exhilarating entertainment of a new Blue Man Group show; marvel at breathtaking new animation and effects in The Amazing Adventures of Spider-Man; dance and celebrate with their favorite animated characters during Universal’s Superstar Parade and relive memorable moments from Universal Pictures most powerful and beloved films during the nighttime show Universal’s Cinematic Spectacular – 100 Years of Movie Memories.  And coming this summer – families will laugh together as they are transformed into minions for an incredible adventure inside the new Despicable Me Minion Mayhem attraction.

Universal Orlando will also be marking the Universal Pictures Centennial Anniversary Celebration during 2012 with a series of events to be announced throughout the year.

“We are about to offer our guests a historic range of incredible new entertainment experiences,” said Alice Norsworthy, Executive Vice President of Marketing and Sales for Universal Orlando Resort.  “This year will be filled with excitement and entertainment for the entire family.”

The new 2012 experiences at Universal Orlando Resort include:

Universal Orlando’s Blue Man Group show is taking their unique and captivating mash-up of high energy music, comedy, audience participation and collective exhilaration to another level. Featuring a new show environment, new music, new technology and new experiences, the show will allow audiences to join the Blue Men as they discover, engage and explore the world’s obsession with cutting-edge technology.  Signature Blue Man Group moments combine with breathtakingly fun new pieces for an explosive evening of entertainment.  New show elements include the curious Blue Men interacting with enormous “GiPads,” a funny and insightful look at contemporary communication vehicles, and a pulsating new finale with an original Blue Man Group music score that will have guests jumping to their feet. Look closely – you may even see the Blue Men take a spin on one of Universal Orlando’s most popular attractions.

Universal Orlando is transforming what is already one of the most amazing attraction experiences ever created into what will feel like an all-new adventure.  The Amazing Adventures of Spider-Man will soon feature all-new, 4K digital high-definition animation, new high tech 3-D glasses and upgrades to the set, audio and lighting systems.  The re-animation of the ride film will include an entirely new level of detail for guests to discover, including a cameo by legendary comic book icon and Spider-Man co-creator, Stan Lee.

Some of today’s most beloved characters and stories will bring new adventure to the streets of Universal Studios during Universal’s Superstar Parade – an all-new daily parade that features larger-than-life floats, state-of-the-art technology and hundreds of energetic street performers.  Guests will sing and dance along with characters like the minions from Despicable Me, E.B. from the hit comedy, Hop, Nickelodeon’s Dora & Diego and SpongeBob SquarePants during the interactive experience. Guests will have the opportunity to enjoy performances and character meet and greets prior to the parade at select locations throughout the day.

Narrated by award-winning actor and recent Golden Globe – Cecil B. DeMille honoree, Morgan Freeman, Universal Orlando’s brand-new nighttime show, Universal’s Cinematic Spectacular, will celebrate the most powerful and emotional moments from Universal Pictures’ most iconic films – all on cutting-edge waterfall screens within the Universal Studios lagoon and surrounded by colorful fountains and pyrotechnics. The experience will take guests on a journey through epic cinematic moments filled with heroes, horror, laughter, good vs. evil and triumph. The new show opens this spring, runs all summer and then on select nights through the end of the year.

Universal Orlando’s newest attraction, Despicable Me Minion Mayhem, will take guests on an unforgettable 3-D adventure with their favorite characters from the hit film – Gru, Margo, Edith, Agnes and the mischievous minions. The experience begins when guests enter Gru’s home, where they learn that they’re being recruited to become minions and undergo “minion training.”  Things don’t go as planned, and guests find themselves on a wildly hysterical journey with Gru and his daughters.  Once guests make it through training, they join an interactive, minion-inspired dance party where they can show off their best moves.

Universal’s Creative team is working closely with Chris Meledandri’s Illumination Entertainment to bring this all-new adventure to life in the most authentic way possible.  In fact, the beloved characters in the attraction will be voiced by the film’s original cast: Steve Carell (Gru), Miranda Cosgrove (Margo), Dana Gaier (Edith) and Elsie Fisher (Agnes).  The ride’s experience is being developed by the same creative team that brought you the award-winning film, Despicable Me. The motion-picture event Despicable Me 2 arrives in theaters on July 3, 2013.

Other New Experiences Opening this Year

Make sure you share your thoughts on our forums about Universal’s big year! 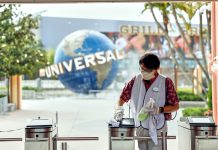