April 2, 2013 – It’s officially Spring here in Southern California, and the season isn’t the only thing changing in Hollywood!

As school districts around the state take a recess for Spring Break, Universal Studios Hollywood has taken the opportunity to make a few announcements and changes of its own. Here’s the latest news from the park:

The NBC Universal Evolution Plan has been inching along for the better part of the last few years, and has finally come to the last stage before approval. After undergoing many changes, including the removal of a housing development from the plan, the final public hearing is set for the morning of April 23rd. Universal is more eager than ever to get this plan approved and moving forward as soon as possible, if this flyer (from @jmillsgreen on Twitter) we found is any indication. 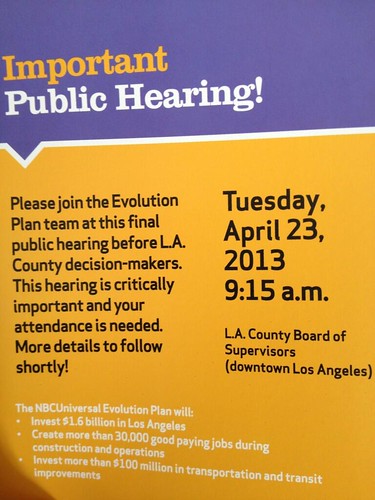 Note the emphasis that Universal has put on what the Evolution Plan will do for the County of Los Angeles and the community. No mention is made of what the plan will do for the theme park and Universal City, but we instead see prominent mention of job creation. For those of you who aren’t Los Angeles natives, unemployment is an enormous problem here, and the promise of over 30,000 new jobs is a key angle for Universal to win over the LA County Board of Supervisors.

Another key issue related to both the County of Los Angeles and the state of California is the severe lack of funds and tight budget cuts. Universal’s promise to invest $1.6 billion dollars into Los Angeles and $100 million to transportation and transit improvements would be an enormous boost to the region, and would lift some of the heavy burden on the local transit authorities that service the area, most notably the MTA and the Santa Monica Big Blue Bus. At a time when those transit companies have lost parts of their funding, raised fares, and had to reduce service in lower-use areas, the influx of money and support would help immensely. Universal is of course most likely looking to improve the various ways to get to their property on already over-crowded public transit and the ever-congested 101 freeway to bring in as many customers as possible, but there is no denying the overall benefit to this for commuters in the surrounding areas as well.

On universal’s part, this focus on the community is brilliant, and arguably crucial for the approval of a plan that could catapult Universal Studios Hollywood into the lead in the intense Southern California tourism market in the years to come. We’ll report any new details or developments regarding the plan’s approval and the final public hearing as they come, so be sure to check back on this story. In the meantime, the Evolution Plan’s progress isn’t the only thing Universal is excited about… 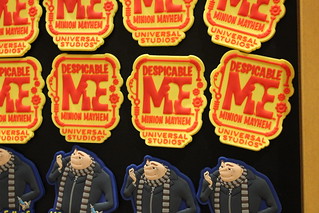 It’s been the second worst kept secret in Hollywood – the first being The Wizarding World of Harry Potter coming to the West – since before Terminator 2:3D was even confirmed for closure, and Universal finally confirmed and announced what the rest of the world knew. Despicable Me: Minion Mayhem is officially coming to Universal Studios Hollywood. Since confirming it to the Los Angeles Times, the park has seen an influx of Despicable Me merchandise.

While DM merchandise has been available in the park for quite a while now, we’ve recently seen Minion Mayhem specific merchandise arrive. Previously, only generic DM items, such as Minion plush dolls and Minion goggles from Orlando were available, but magnets and pins with “Minion Mayhem” written on them have also begun to surface in Hollywood. Expect more arrivals in the coming months, and keep your eyes open for the Minion blimp as it flies over various cities!

While we’re on the subject of secrets in Hollywood, we should note that the Universal Plaza area is still being developed behind the work walls that extend from Wild West to Mel’s Diner. The rather expansive area has been cleared out, flattened, and torn up again in months past, and now it seems there seems to be extensive pipe laying going on. 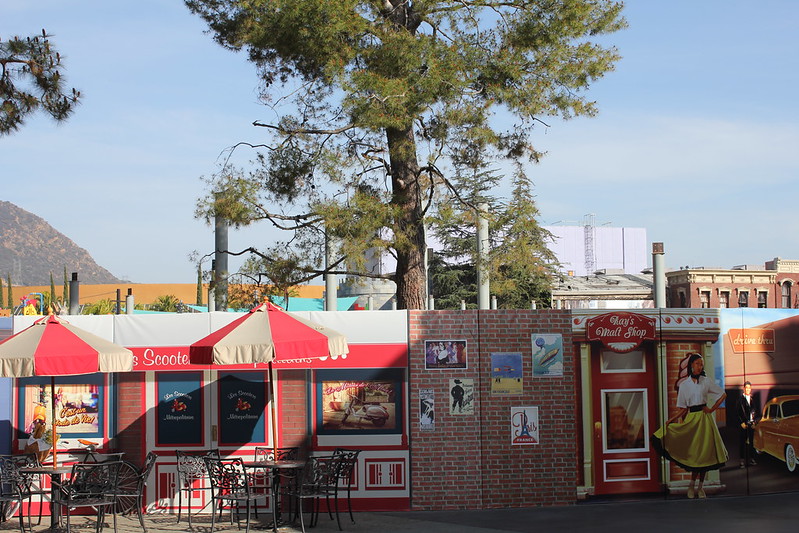 What could they be putting there that requires so much water? Some believe it may be for a large fountain that may serve as a centerpiece for the area once it opens. A fountain would be a nice addition to the interior of the park and help in creating a central point of the upper lot, similar to the Partners Statue / Hub in that other famous theme park across the county line.

While Universal does have a fountain already at the front gates celebrating the movie making tradition, its positioning near the entrance makes it a nightmare in terms of foot traffic and photo ops during peak season. A second fountain in the Universal Plaza would potentially help to alleviate this.

In addition to the pipe-laying, support beams have also begun to appear, towering over the work walls. Some are speculating that this will be for an awning of some sort, to provide shade from the blistering Southern California summer sun. We’re unsure of the permanency of these however, as Halloween Horror Nights will surely need this area for a maze, and would need to remove any surface structures for construction. We’ll follow up on this as that event nears.

Better yet – hold onto your butts, because Spring Break is here! The past two weeks have seen an enormous increase to park attendance as families flock to Universal on vacation.

Wait times ballooned from their off-peak 20-30 minute norms to upwards of 3 hours for Transformers and 2 hours for Jurassic Park. With so much construction going on and the closure of T2, crowds were almost unbearable due to the sheer amount of people with no where to move in the upper lot. With the promise of a record summer this year as the economy continues to improve, it will be crucial that Universal finish the Universal Plaza and add some other form of entertainment to handle the influx of visitors.

If you’re an annual pass holder looking to mix it up or a first-time visitor wondering how to handle the Spring crowds in the next few weeks, then be sure to check out our attraction guides and the forums for tips on how to see and do everything in one day, and maybe give a few of your own for others to try!

That’s all the news from Hollywood right now. Check back with us often for the latest updates as they develop!

To get the latest updates on the go, follow us on USHForums.com, Facebook and Twitter! To add your own voice to the mix, find us on Group Me!

As always, thanks for making us your source for all things Universal. Till next time, this is Miss B signing off. Thanks for reading!