Personally speaking, Despicable Me is the first Universal film I’ve seen in theaters in practically five years. To say that Universal hasn’t released a worldwide hit on the scale of Avatar, Batman or Harry Potter would be an understatement – hence the recent trend of non-Universal attractions opening at Universal parks worldwide.

Fast-forward to 2010, and you could imagine my surprise at Universal’s box-office hit, Despicable Me. Having almost ignored Universal’s recent releases for the better half of the decade (with the exception of King Kong), I was intrigued.

Not only did I find Despicable Me beautifully animated and (best of all!) original, it was also a genuinely delightful film. It wasn’t Pixar, mind you – but it didn’t need to be. In fact, emulating Pixar would be to the film’s disadvantage. Instead, Despicable Me was uniquely Universal.

What is Universal – specifically, a Universal animated film like Despicable Me? For me, it’s sharp and edgy comedy that still manages to retain its heart and humanity. It lacks the pure innocence of Pixar and Disney, but it still leaves you in a state of child-like admiration and affection for the characters on screen. It’s an adult comedy – on paper – that manages to transcend age and gender. It pushes boundaries of family-friendly comedy without being hurtful, and it captivates audiences with a sense of realism. It’s both crude and smart, and in short, it’s uniquely Universal.

Of course, Universal has always been capable of releasing this caliber of production in the past. Just look at The Grinch, Casper and E.T. as shining examples. But of course, the studio has also had its fair share of severe misfires (look no further than the disastrous release of Dr. Suess’ The Cat in the Hat), which is why Despicable Me hit a spark on my radar. After years of complacency and mediocrity, Despicable Me finally appeared to be a return to Universal’s classic kid-friendly roots – which leaves us to the ride. 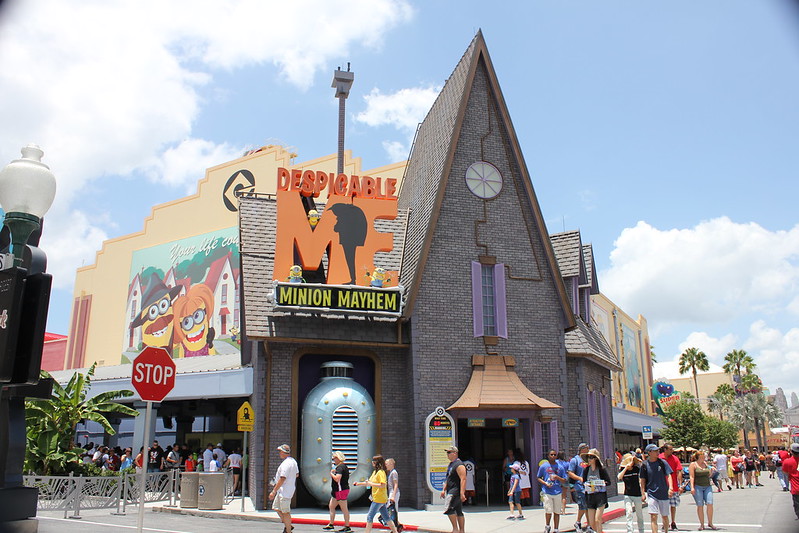 Two years after the film’s initial debut, Universal Studios Florida opened Despicable Me: Minion Mayhem in 2012. By many accounts, Minion Mayhem appears to be a simple rehash of Jimmy Neutron’s Nicktoons Blast, and to some extent, the Funtastic World of Hanna-Barbera. What follows are my first impressions of Florida’s attraction with a few concluding thoughts of what Minion Mayhem potentially means for Universal Studios Hollywood.

Given that you’re supposed to enter Gru’s elaborate mansion, the queue is surprisingly bare. As a result, there’s really nothing to write about. For Hollywood fans, think Terminator 2:3D. Monitors, posters – the bare essentials to keep guests entertained.

Sure, there are clever posters lingering here and there and the partial theming of Gru’s house is a nice improvement over what had been there before (a rather barren queue littered with monitors), but there’s really nothing notable to note.

And that’s the unfortunate truth.

Now here’s where things start to get interesting.

As you enter into the first preshow room, you’re greeted with a bit more theming (relatively speaking). Minion Mayhem definitely isn’t as comically overblown as Transformers: The Ride with oddly placed CD drive covers or randomly placed buttons. Instead, the attraction follows a sense of subdued continuity from the 2010 film, something which – I’m sure – took great restraint.

Gru’s family tree, crayon sketches by the girls, torture devices and other clever touches allow the preshow room to follow in the spirit of the Gru’s intimidating – yet somehow welcoming – abode. Nothing screams cheapness here, and the room appears to be nicely themed.

Gru: “After spending months sampling the latest in eyeware technology… [Dr. Nefario] chose the cheap but sensible goggles that you are holding in your hot little hands.” 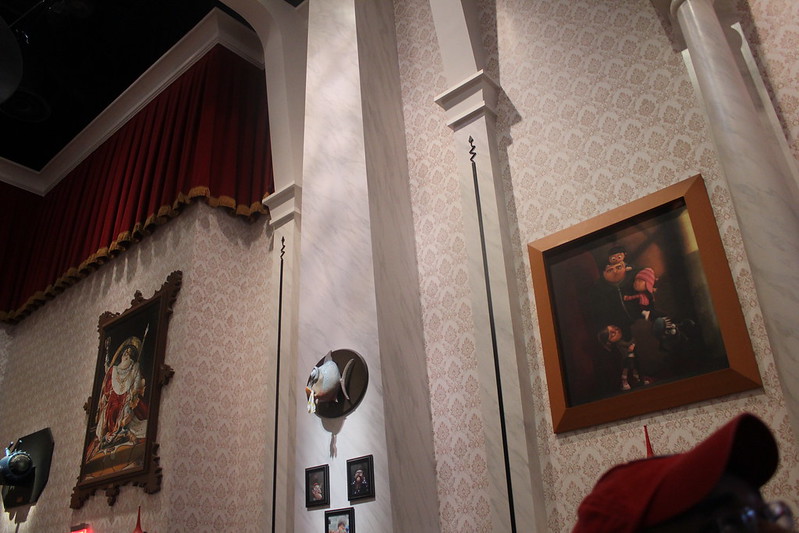 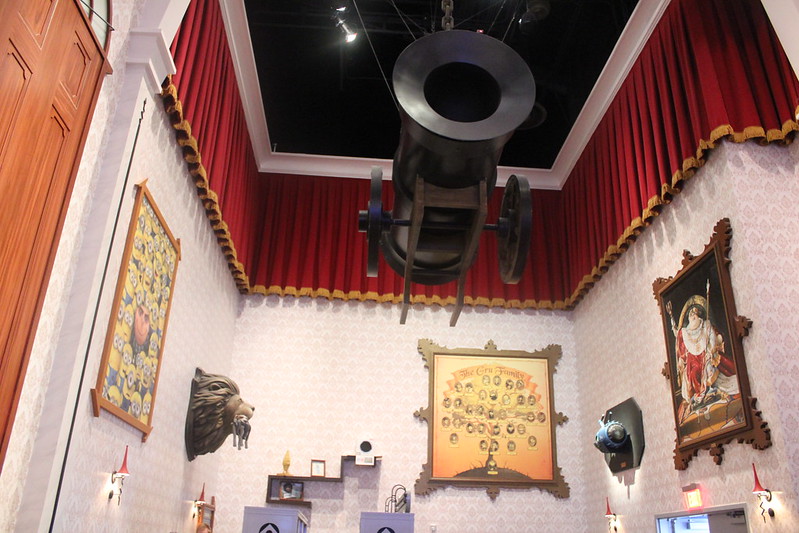 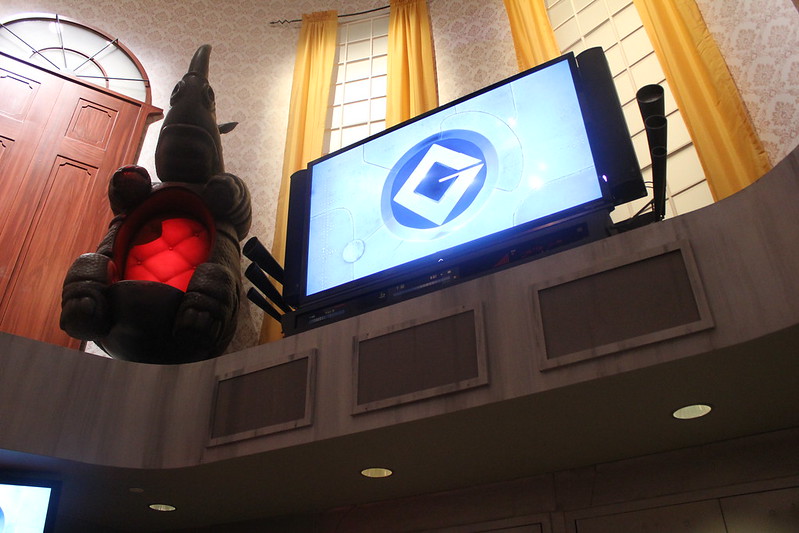 As with most Universal attractions, guests pick up their 3D glasses in the all-too-typical salad-bar arrangement while queuing up for the next room. One large television – stylized after Gru’s entertainment center – sits firmly above the room, flanked by two smaller monitors below. Guests watch a short preshow video, and then enter Gru’s lab.

Now about that first video: this is what I’m talking about. Understand, there’s only so much you can do with a preshow video, but count me as a person that was pleasantly entertained. If you’re a fan of the film, you’ll love what they did here. Keep in mind: nothing innovative is being done, but overall – it’s cute, and guests appeared to eat it up. Gru’s odd speech impediment (which to me, reminds me a bit of Christopher Walken) seems to have captured the Universal spirit exactly: normal at first, but you’ll start to notice something is off upon a closer inspection.

In fact, you can watch our video below to get a sense of what I mean. My favorite quote: “After spending months sampling the latest in eyeware technology… [Dr. Nefario] chose the cheap but sensible goggles that you are holding in your hot little hands.” Yep. Classic Universal. Cheap, but classic. Glad to see a theme park poke fun at its parent company.

Heading on to the second preshow room, you begin to enter Gru’s lab. Three large vertical monitors stacked vertically sit front and center – creating the illusion of a windowed balcony – along with two smaller monitors flanked to either side. As with the first video, expect the cuteness to continue – but keep in mind, nothing innovative is being done throughout the entire attraction. If you consider banana-scented fart-guns to be innovative, you might be pleasantly surprised. But for everyone else, it’s practically the same old spiel. 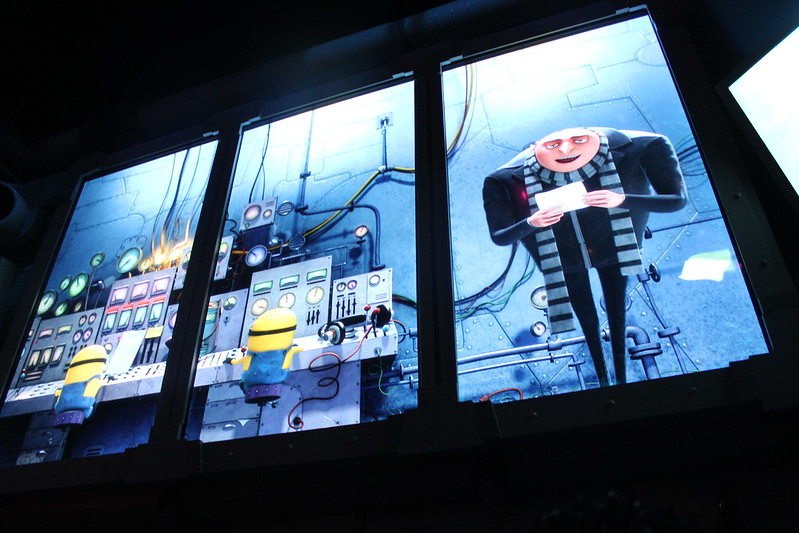 Keep in mind: this is a drastic improvement over Jimmy Neutron, but the basic formula remains.

Plot aside, Minion Mayhem – in many respects – reminds me of a smaller version of the Simpsons Ride. A sharper, cleaner and brighter version, mind you, but a smaller version nonetheless. The movements are remarkably similar between the two (with both including surprisingly similar gags), and the overall experience doesn’t seem particularly new.

Ride vehicles occupy the room as a large screen engulfs the front-of-stage (a noticeable increase from that of Jimmy Netron’s). Guests move directly to the farthest end of their row – similar to Shrek and Terminator – as team members slowly strap you in with the pull-down lap bars. Again, pinch me if this sounds similar.

The ride experience itself was fine, and the film was slightly brighter and clearer than I had originally expected. I won’t give the plot away, but let’s just say fans of the film are bound to have a good time.

Now, what exactly does this all mean for Hollywood? Well, here’s what we know: Hollywood will most likely be getting an enhanced experience in comparison to its Florida counterpart. Whether that translates into a better queue or preshow experience, we’re not exactly sure. But we’re prepared to see a more elaborate façade given the progress we’ve seen thus far at the Terminator/Despicable Me construction site. Regardless of the developments taking place (including that of Super Silly Fun Land), we’re expecting the same fundamental plot and ride system – which leads into another potential problem: innovation.

As I’ve noted with Transformers in the past, nothing seems to be particularly groundbreaking about Despicable Me: Minion Mayhem from a guest’s point-of-view. The ride system is fundamentally based upon something that was originally built 23 years ago, and the attraction’s formula seems to be tried and true – almost a fault (preshow, preshow, ride). So in other words, what exactly is Despicable Me bringing to the table that hasn’t been already been done? More importantly, is it the right fit for Universal Studios Hollywood?

To answer the first question: nothing, really – and therein lies the problem. Minion Mayhem is currently in the midst of replacing Terminator 2:3D at Universal Studios Hollywood.

What may have been perceived as a fine replacement for Jimmy Neutron by the Florida community did not equate into the same reception by those in Hollywood. In Hollywood’s view, Terminator and Despicable Me did not equate to the same type or level of experience.

…which brings me to the second question: is Minion Mayhem the right fit for Hollywood?

I’m going to go out on a limb and say yes, absolutely. Regardless of how you feel about Terminator, think of that specific situation as split milk. Having said that, I see Despicable Me in this light: instead of the admittedly cheap rehash we saw in the case of the Simpsons at both Hollywood and Florida, it appears as if Universal is investing serious capital into doing things right. To put it more bluntly: it’s not being done on the cheap.

True, the ride system is older than dirt, but that’s beside the point. Technology aside, Despicable Me: Minion Mayhem is a genuinely delightful ride, and that’s what counts. Sure, Florida’s experience may have been subpar given the potential of what Universal could have done with the franchise there, but look at what they’re currently planning for Universal Studios Hollywood. Not only are we getting an enhanced version of the ride, but we’re also getting a mini-themed land. This is impressive, to say the least, and something unthinkable just a few years back under the reign of General Electric.

…and while the similarities between Minion Mayhem and the Simpsons Ride are uncanny, I don’t expect most guests to notice. If anything, I’d expect guests to be delighted at yet another child-friendly added to Universal Studios Hollywood’s lineup.

So while I won’t make any major predictions of what we may see here in Hollywood, I am expecting big things. If Universal’s recent projects are any indication, we could see something spectacular in the coming months. Add to the fact that this is a Universal attraction based Universal film makes me more optimistic for the future ahead. After all, what other studio could reproduce the unique Universal touch?