Editor’s note: Bruce Babcock is a contributor to Inside Universal’s coverage of Halloween Horror Nights. We’ve asked him to give us his predictions and analysis for this year’s event.

July 3, 2013 – Seeing that Universal will begin announcing the titles of mazes and scare zones for 2013’s Halloween Horror Nights, I find that now may be a fitting time to take a stab at some good old speculation as to what we may see. These are guesses and are not in any way “leaks” or truths. I have no inside sources, nor do I dig for rumors. Just like many of you, I’m basing my guesses off of what I have read on the Halloween Horror Nights’ Twitter page as well as injecting some of my own love of the horror genre and what I would like to see at the event.

Let’s jump into it.

I strongly feel that The Walking Dead is going to be making a return.

Seeing Walking Dead merchandise in the park year-round tells me that Universal probably has some sort of licensing deal with AMC. Between Herschel’s farm at the end of Season 2 and Woodbury and the Prison from Season 3, the Halloween Horror Nights team has plenty of environments to choose from.

The city of Woodbury may also constitute its own scare zone this year as well. Many of the set pieces can easily be recreated to fit in a scare zone as well as several of the vehicles seen in the show. The Walking Dead was a huge hit for the park last year and consistently receives great ratings on television, so I will be very surprised if we don’t see it again this year.

After seeing a few of the pictures that John Murdy tweeted as possible hints, I’m guessing that we will see Alice Cooper’s version of the classic tale, Alice in Wonderland.

For those who don’t know, Murdy tweeted several pictures (which have since been removed); some were hints and others were red herrings. This is what I noticed:

Think of the possibilities of mixing an already trippy and twisted tale as Alice in Wonderland with the minds of Alice Cooper and John Murdy. The blend of environments and characters just scream Horror Nights possibility. I think this would make the perfect conclusion to the Alice Cooper trilogy. We’ve been to Alice’s Nightmare, Hell and hopefully his Wonderland.

James Wan is a director whom people may or may not know. Wan is responsible for some of the biggest horror films in the last decade.

Saw (former Hollywood maze), Dead Silence (former Orlando maze), Insidious and the upcoming film The Conjuring and Insidious 2 are all of Wan’s recent films. Fast and Furious 7 is actually next on his list, which makes him a director on the rise in Hollywood. I once read that John Murdy wants to release a maze announcement on the release date of a horror movie.

The Conjuring has a release date of July 19th, and Insidious 2 has a release date of September 13th. The July date would be good for the first announced maze, and the September date would be good for a final maze announcement. I selected both of these films because they both revolve around paranormal incidents. The Conjuring is based off “true events” of Ed and Lorraine Warren – the couple who investigated the Amityville Horror incidents. Based on the trailer, it definitely has a story and environment that can easily be created for a maze. Ghostly creatures would be the characters of course.

Resident Evil has always been a more popular video game series (and film series) than Silent Hill (2012 Hollywood maze), and if I’m not mistaken, was also a featured property at Universal Studios Japan.

Resident Evil has an iconic atmosphere similar to Silent Hill, and arguably more iconic characters that would be perfect for a maze. This would make Resident Evil the perfect follow up maze to Silent Hill. The films have been a massive success and the merchandise opportunity is huge. I probably see an “Umbrella Corporation” t-shirt every week! I don’t have much experience playing the games, but I have seen every movie and the potential is definitely there. Just about everybody has been exposed to some visual of Resident Evil.

Hollywood has been remaking horror movies left and right for the past couple of years, and a few of these remakes have made their way to Halloween Horror Nights (My Bloody Valentine, Nightmare on Elm Street, Friday the 13th, and Texas Chainsaw Massacre to name a few). The latest classic horror series to undergo a remake is the 1981 classic, The Evil Dead. That makes this year the perfect year for this property to make its way to Horror Nights. I’ve heard John Murdy note his fandom for the series, so it’s really surprising to me that it has not been a property featured at the event before.

Every one of the criteria Murdy uses for selecting a property is heavily prevalent throughout the film. The film has a “cabin in the woods” setting, the iconic character of Ash and the deadites, the props such as the chainsaw hand and the Book of the Dead – all of these belong in a Halloween Horror Nights maze! If you have not seen these movies, do yourself a favor and rent Evil Dead 2. It is a far better film than the first, and is something everyone should view at least once since it has just as many laughs as it does scares.

The above properties are properties that I feel have the most potential to be featured at this year’s Halloween Horror Nights. Many have speculated that Trick’r Treat should be featured, and I agree that this would make a great Halloween themed maze. But while it does have an iconic central character, Sam, I feel it may be a bit difficult to replicate much of the film’s characters and storylines into maze form. American Horror Story, Bates Motel, and Dexter are all other popular properties that I envision may also have problems reproducing story, characters, and props into maze form. How many rooms can you walk through and see Dexter slicing away before it gets old?

The final thing I have been constantly wondering: with the Terminator’s queue and Wild West/Universal Plaza area under construction, where would this year’s mazes be? According to Murdy on Twitter, fans will “never, ever, ever, ever guess” – a total shocker. Well, here are my guesses. 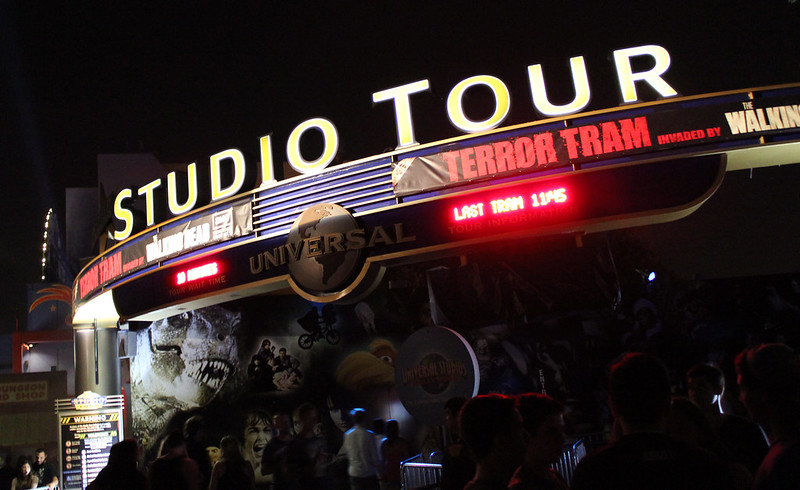 What I would like to see is the Terror Tram get some special treatment. I bet this probably won’t happen due to the logistics of controlling crowds on the backlot, but personally, I think a maze with the facade of the Prison from The Walking Dead would be perfect. One big, immense, outdoor/indoor maze experience would be very cool. Aside from the lot, I see this maze being put in a soundstage, or at least in one of the show buildings.

With Special Effects Stage occupied by Bill and Ted, I don’t see how it could fit in there. WaterWorld’s queue perhaps? Seems like a good fit for Resident Evil. As for Animal Actors – the area just seems way too small to occupy a maze. I really hope that when John Murdy announces new locations, it’ll be something special. 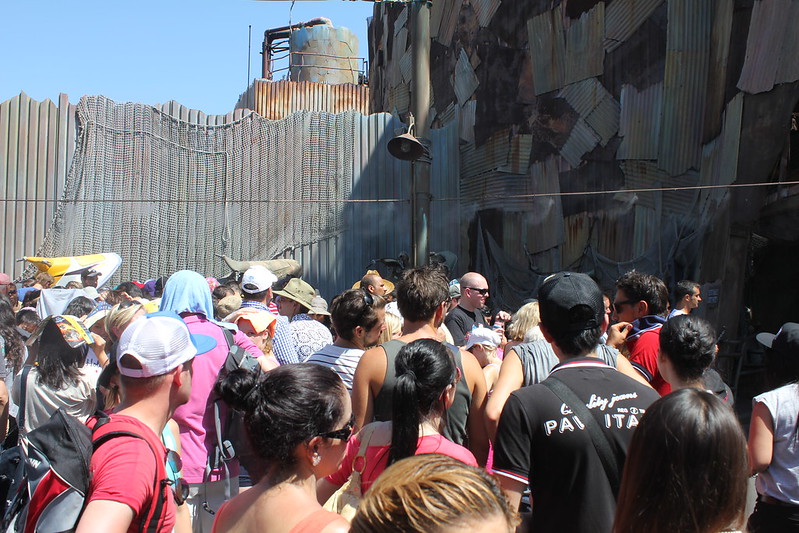 There you have it! My best guesses for Halloween Horror Nights 2013 at Universal Studios Hollywood. I have a feeling this will be a year full of new things.