It’s the most wonderful time of the year at Universal Orlando Resort. From Dec. 7 through Jan. 4, families can create lifelong memories during Universal Orlando’s Holidays celebration. Kids from one to 92 can come face-to-face with The Grinch at Grinchmas, watch larger-than-life balloons float through the streets during the Macy’s Holiday Parade and hear Christmas music sensation, Mannheim Steamroller, perform beloved holiday classics with a modern twist.

At Universal’s Islands of Adventure, guests will smile from ear-to-ear during the heartwarming live show, “Grinchmas Wholiday Spectacular,” featuring The Grinch and the Whos from Who-ville, accompanied by an original musical score by Mannheim Steamroller. Guests can meet the mean, green one himself and the Whos daily and, on select dates, enjoy a special breakfast with the characters.

At Universal Studios Florida, the Macy’s Holiday Parade will fill the streets with the same larger-than-life balloons seen in the famous New York City parade. Guests will be immersed in the spirit of the season with holiday characters, fantasy-filled floats and a tree-lighting ceremony with the big man himself, Santa Claus. This year, there is a brand new addition to the line-up of timeless holiday parade icons. Happy the Hippo, a recreation of a 1940s Macy’s Parade balloon, will make her debut in New York City this Thanksgiving before heading to Orlando to appear in the Macy’s Holiday Parade at Universal Studios Florida.

Following the parade, the acclaimed musical group Mannheim Steamroller will take to the Music Plaza stage in Universal Studios six nights this year to perform memorable holiday hits on Dec. 7, 8, 14, 15, 21 and 22.

All theme park holiday entertainment – including Mannheim Steamroller concerts – is included as part of park-to-park or multi-day admission to Universal Studios and Islands of Adventure. For a memorable getaway, guests can take advantage of the following vacation packages:

This is a separately ticketed event. More information on EVE 2013 will be available soon at www.UniversalOrlando.com/Holidays.

The celebration continues at the three deluxe on-site hotels at Universal Orlando – Loews Portofino Bay Hotel, Hard Rock Hotel and Loews Royal Pacific Resort – all of which will glisten with holiday decorations. Hotel guests will be immersed in the spirit of the season with holiday buffets and dining events, tree-lighting ceremonies, visits from Santa, and holiday poolside “dive-in” movie presentations.

Loews Portofino Bay Hotel features the Gather Together Thanksgiving feast with Pilgrims and Indians on Thanksgiving Day, then kicks off the holiday season on Friday, November 29 with ‘Holiday Harbor Nights,’ a wine, food, music and tree lighting celebration on the Harbor Piazza.  On select nights in December at Portofino, guests can enjoy Holiday in the Harbor featuring carolers, storytelling and visits with Santa. Hard Rock Hotel features special Thanksgiving, Christmas and New Year’s Eve buffets and Santa stops by The Kitchen restaurant every Friday in December.  Loews Royal Pacific Resort offers holiday buffets for Thanksgiving, Christmas Day and New Year’s Eve, plus a special New Year’s Eve luau to ring in 2014. 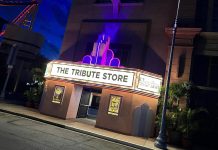