First off, before I get started with today’s subject, let me explain the purpose of [Zoom Lens].

However, unlike our more traditional articles, [Zoom Lens] also seeks to combine this attribute with an individual narrative, combining our personal thoughts alongside that of the article’s subject. While this isn’t storytelling in the traditional sense, it will allow you – our reader – to gauge the thoughts and opinions of the column’s author.

So without further ado, let me present this month’s subject: Universal Plaza. 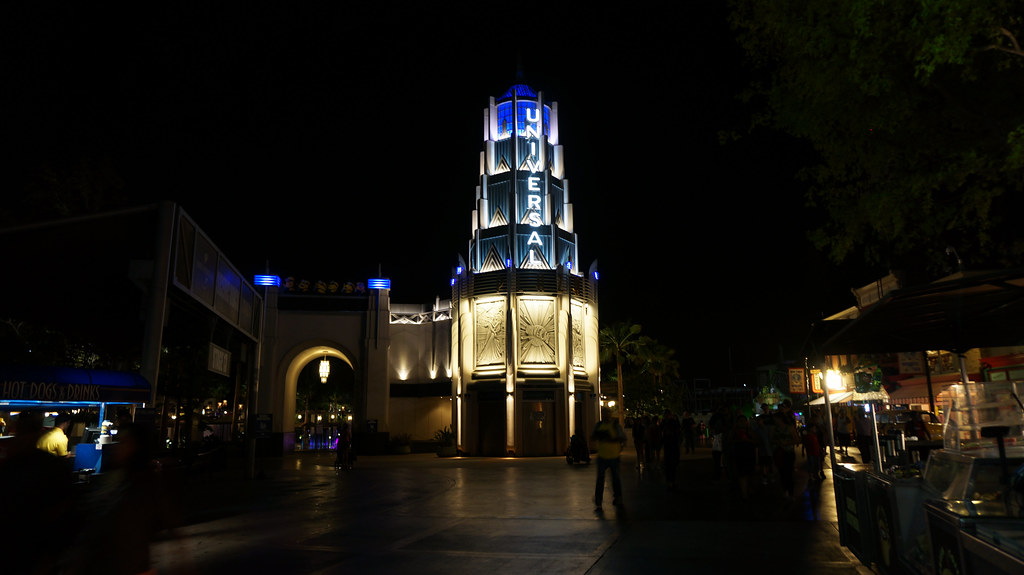 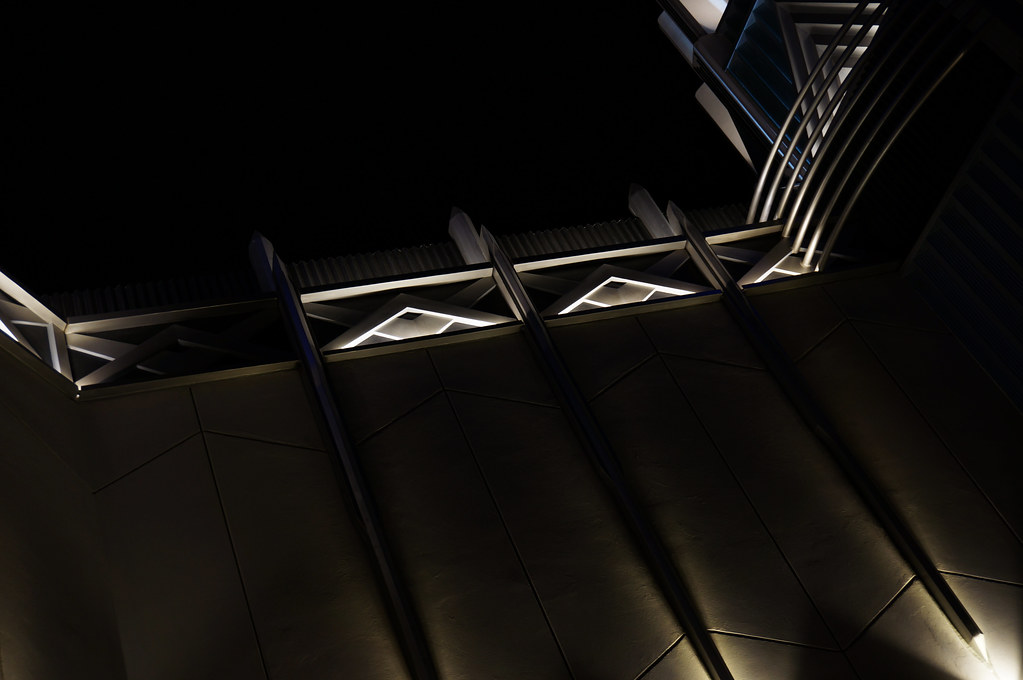 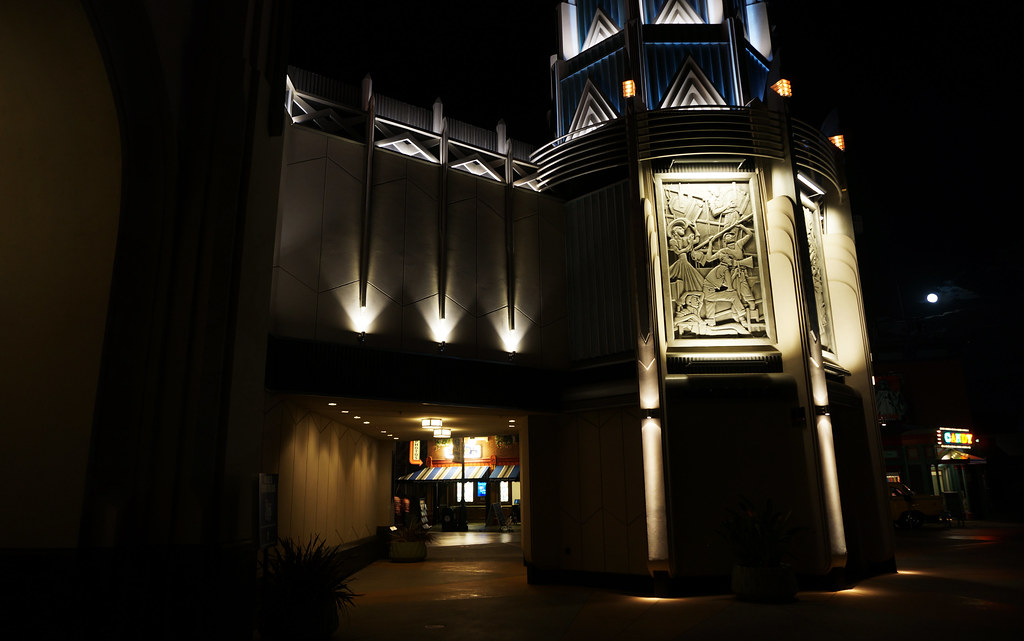 While Universal Plaza might have been an obvious choice to start this series off, there is one aspect of the area that most guests might not ever see: its nighttime transformation. 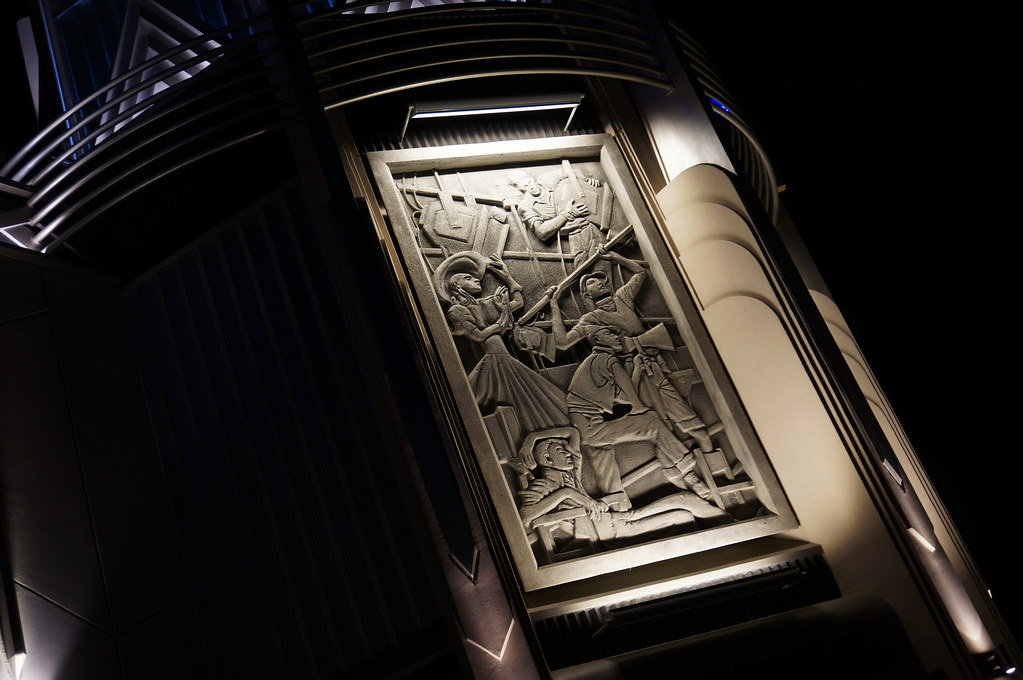 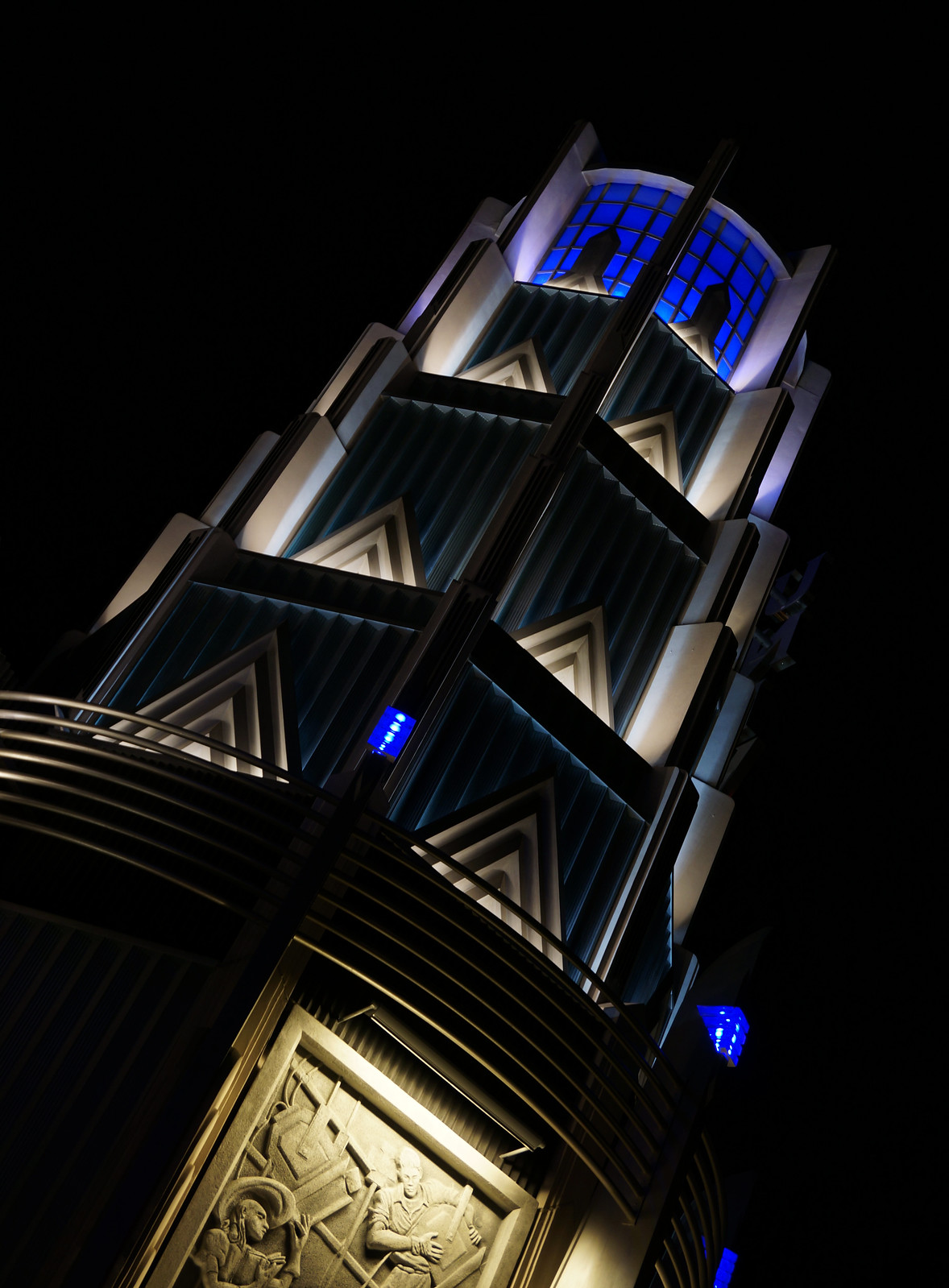 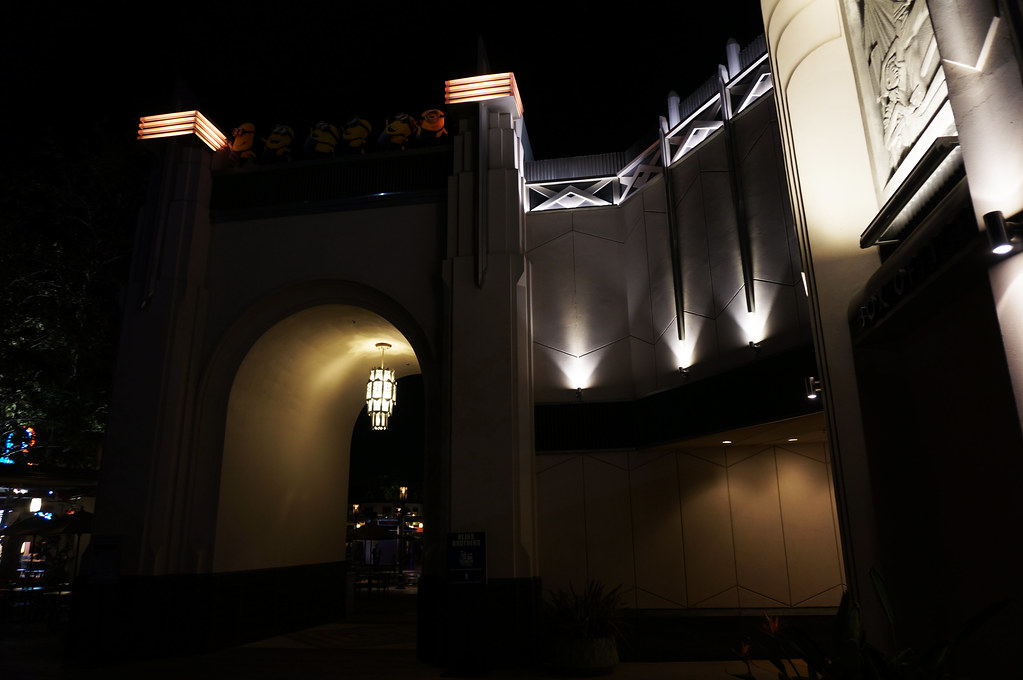 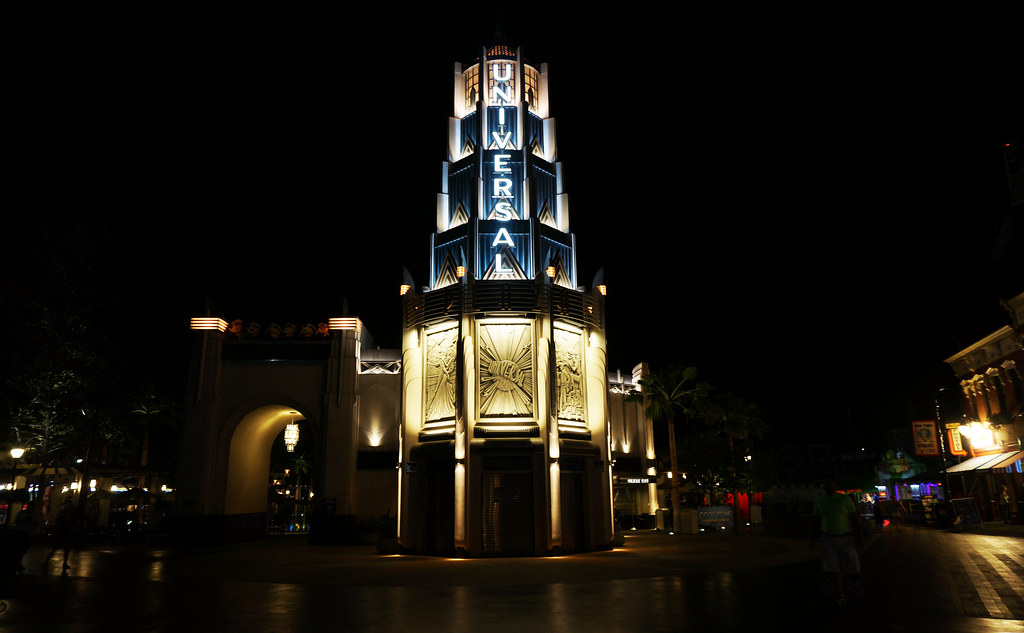 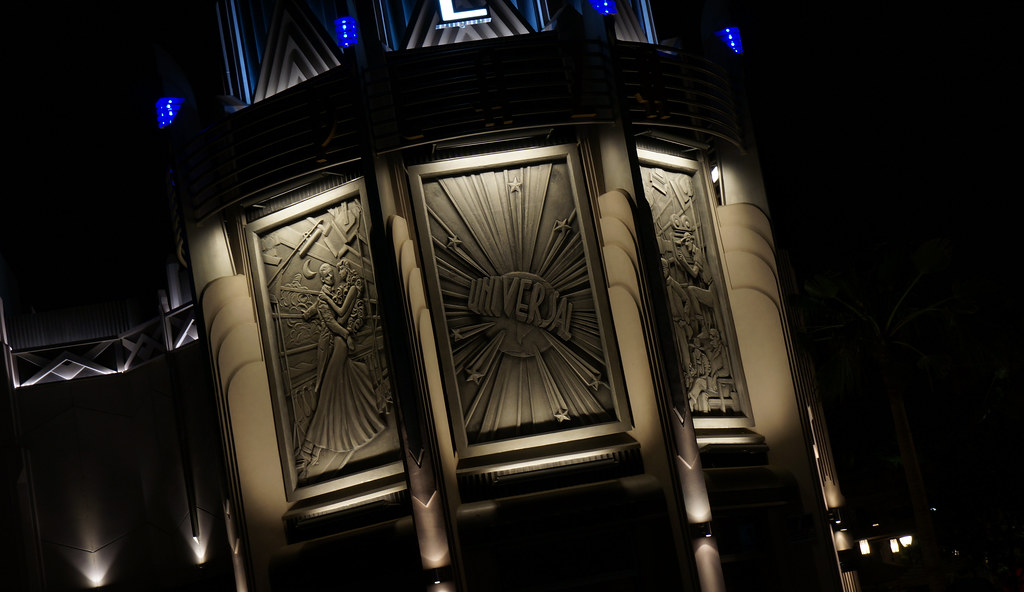 Throughout the year, Universal typically closes before the start of dusk, forcing many guests to leave the park before the lights turn on. While Universal Plaza certainly looks great during the day, it turns into a completely different beast at night. Gone is the loud, boisterous park atmosphere (which Hollywood has plenty of), and in its place, a tranquil water setting coupled with a light city soundtrack. It’s almost everything you’d imagine Hollywood not to be, and it’s the perfect setting to wind down during the day.

See, while loud music and entertainment has its place, Universal Studios Hollywood has – in my view – always lacked an area where guests could simply calm down. Wherever you went, you were constantly reminded that you were at a theme park filled with kids, rides, shows, noise, fast food…eh, you get the point. Whether that be a loud backing soundtrack or the onrush of flurried guests, there are very few places in Hollywood that gave you the opportunity you to simply sit and relax. Heck, even during the day, Universal Plaza was essentially a cacophony of different lands and attractions, with Blues Brothers, the Moulin Rouge singers, the New York City tap dancers and competing soundtracks all meshing into an one big uncomfortable string of sounds and emotions.

But at night, the transformation couldn’t have been any more different. 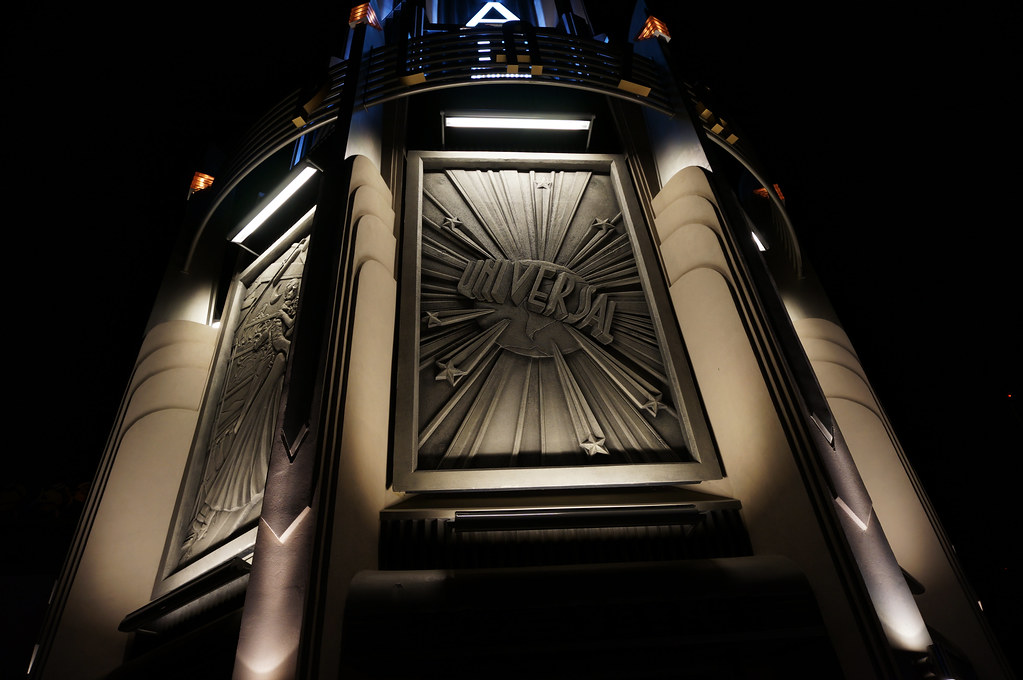 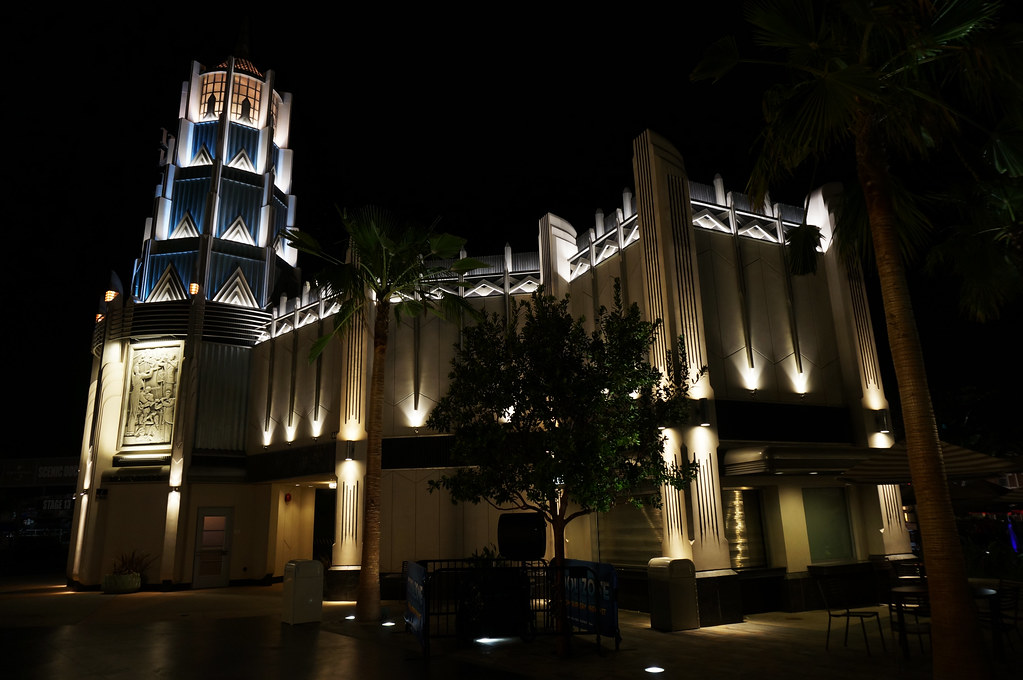 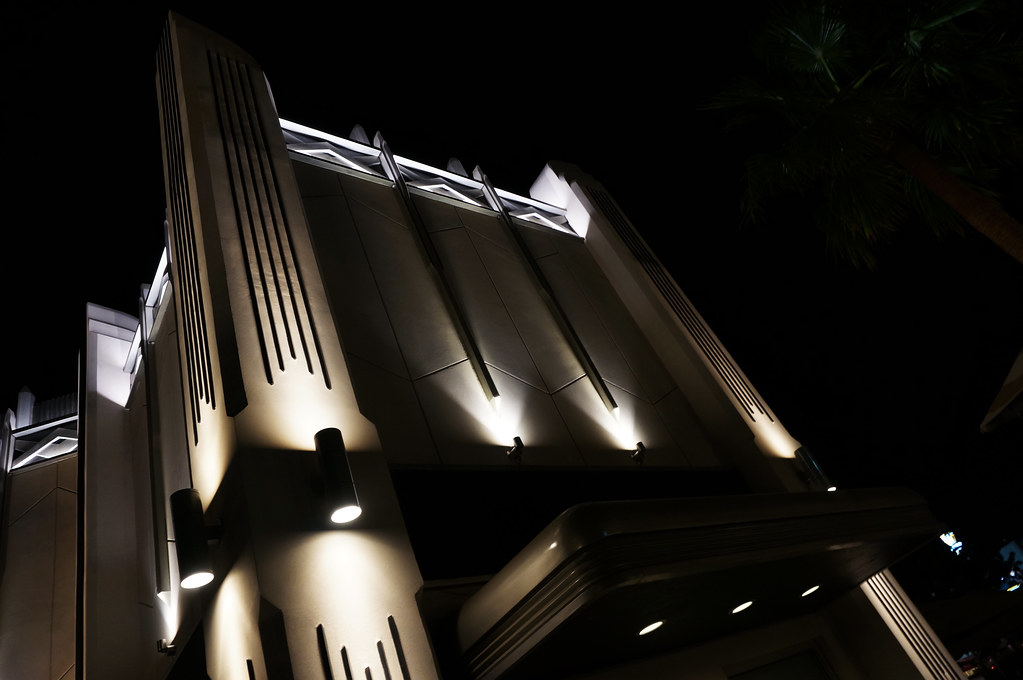 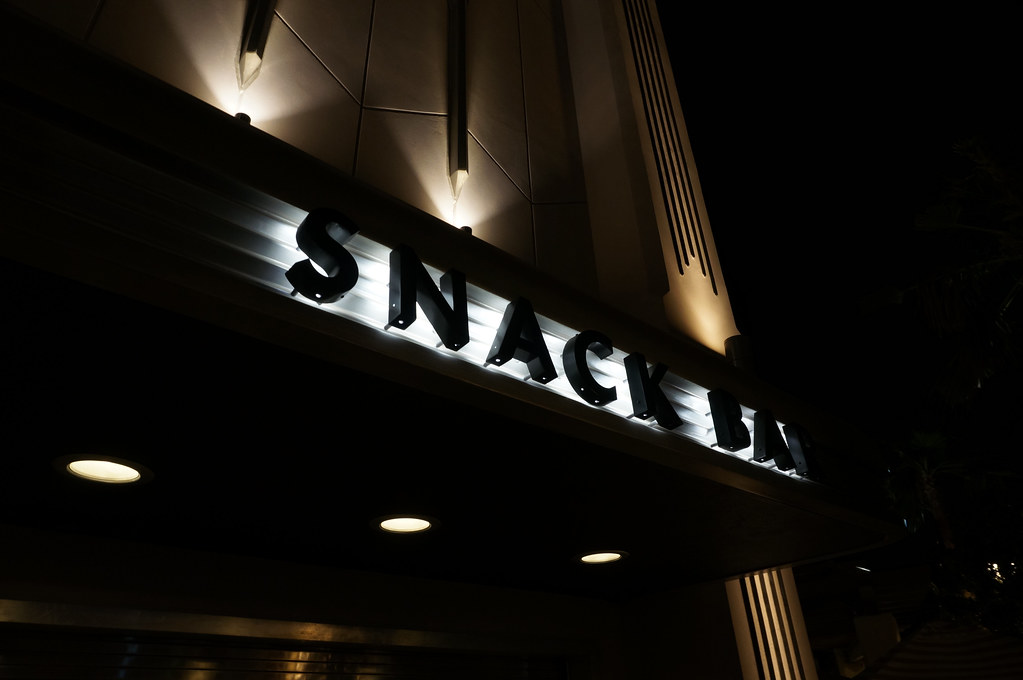 Softly lit by warm (but modern) LED fixtures, Universal Plaza almost appears to be a foreign object within the park – standing as a testament to the new Universal Studios Hollywood juxtaposed somewhat uncomfortably to the aged infrastructure of yesteryear, embodying the current era of change and transition. While Universal has indeed attempted to illuminate other sections of the park (the refurnished Mouline Rouge serving as a notable example), one gets the impressions that Plaza was meant to shine exclusively at night.

Indeed, its colorful spire mixed with its declarative posters at the base remind me of a period known as the roaring twenties – an era renowned for its exuberance and unapologetic excess that sought no bounds or limitations. So while that era is certainly gone and Universal Plaza is certainly not necessarily excessive in its own right, the structure’s classic styling coupled with a few contemporary finishes allow us to travel back in time to a classier, if not more fascinating era of film. 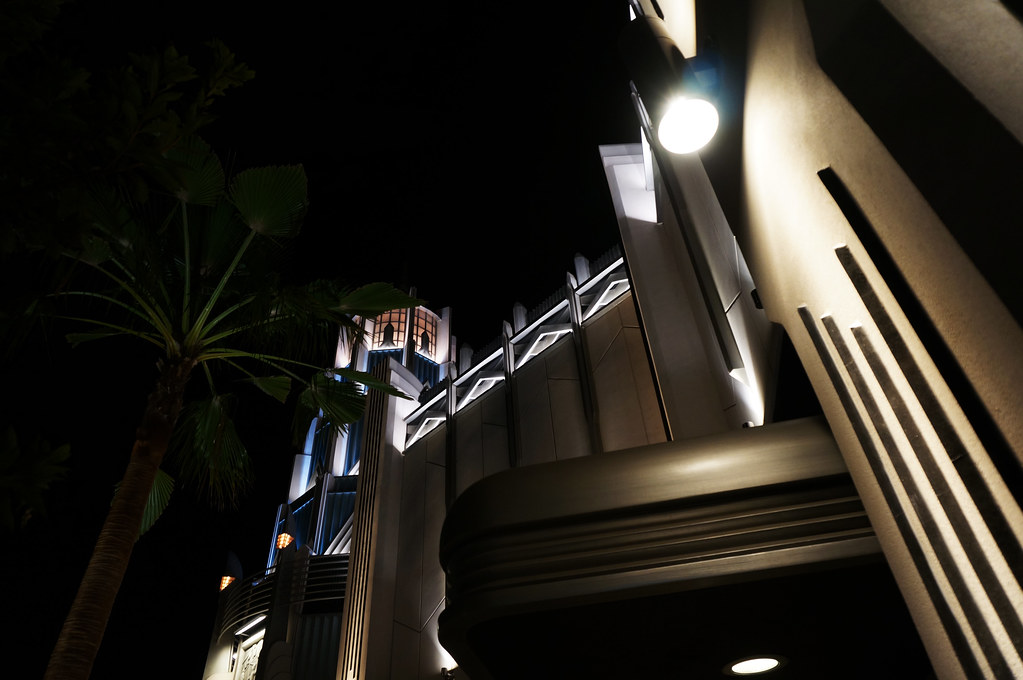 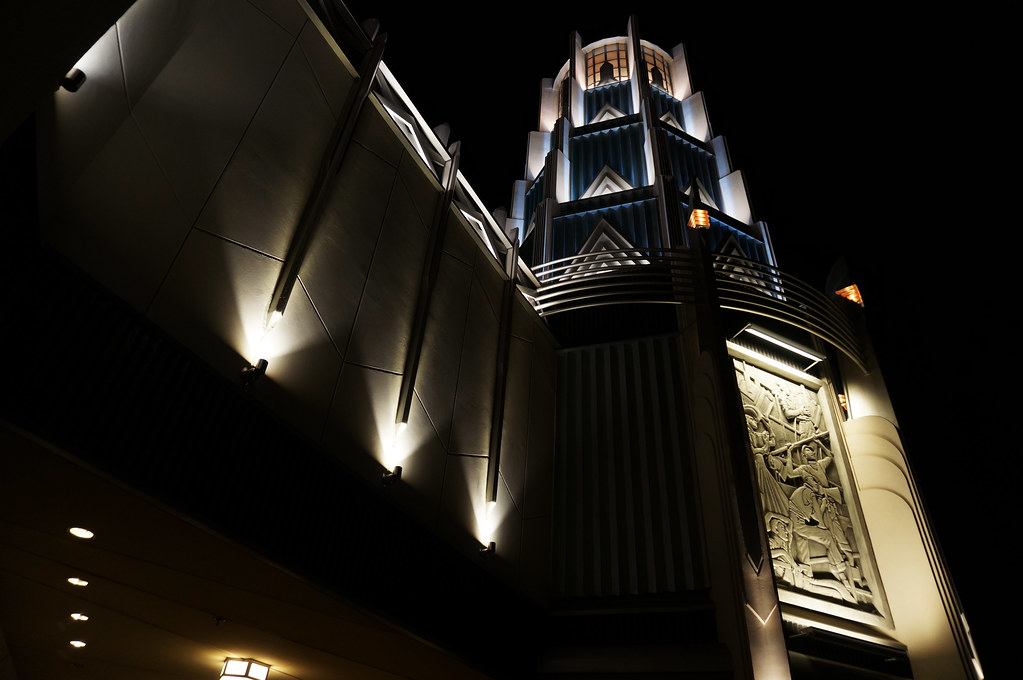 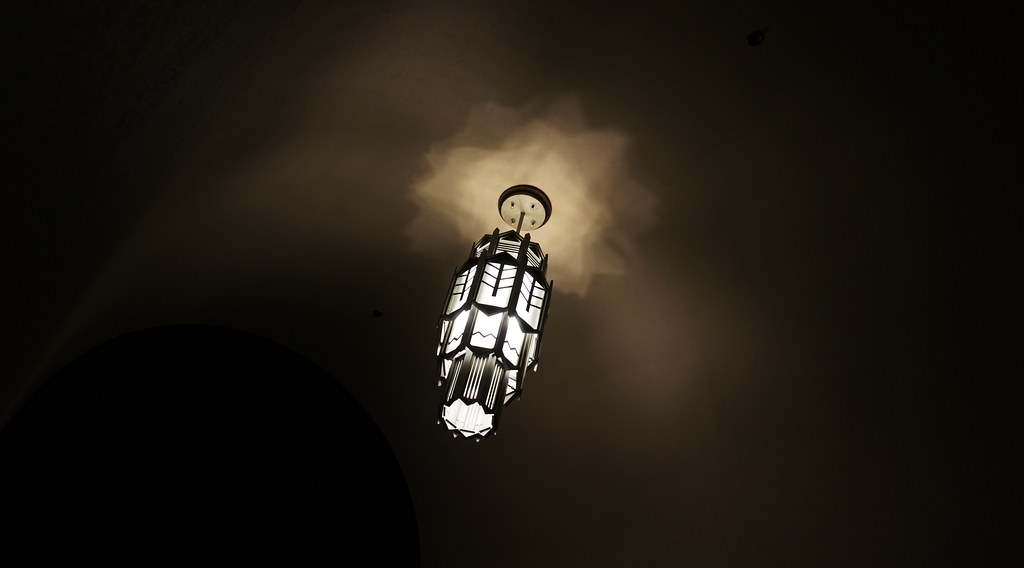 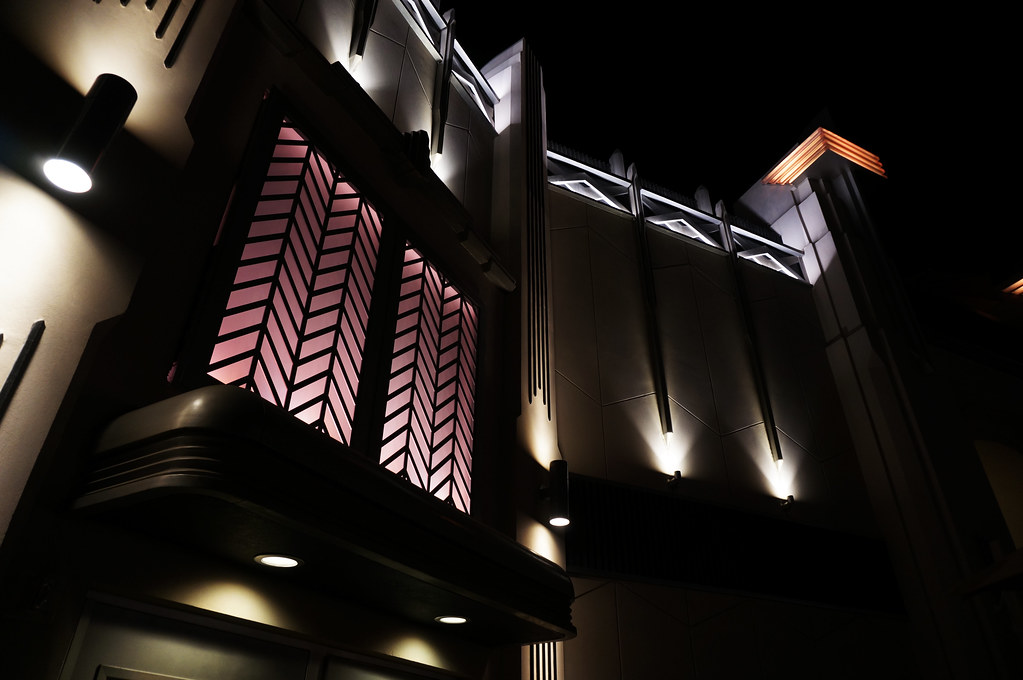 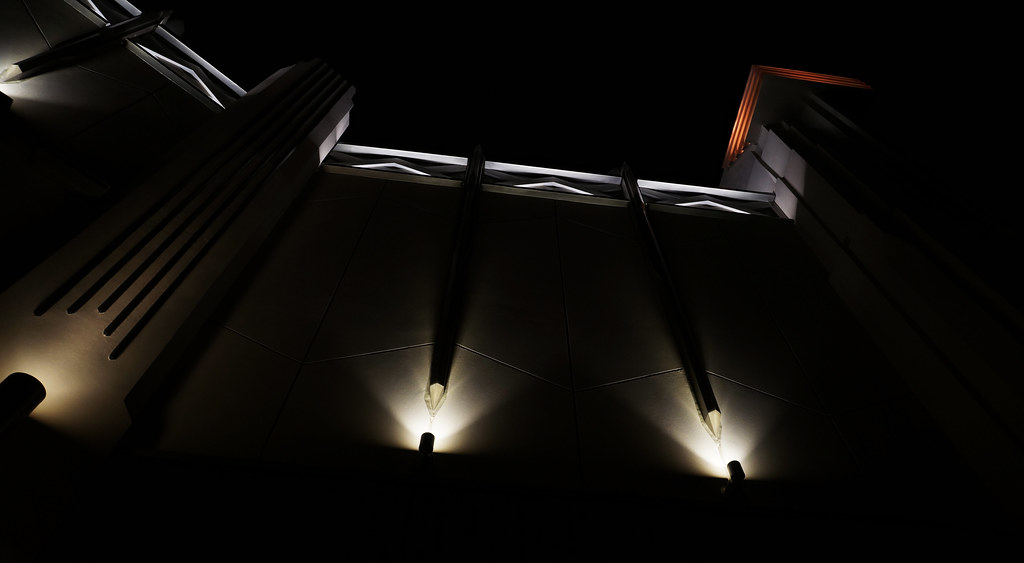 Passing underneath the arch, however, allows us to witness Universal Plaza’s true star: the fountains.

Resembling its larger sibling World of Color further south, the fountains of Universal Plaza are beautifully illuminated by colorful LEDs that playfully change depending on the mood of the playground. Mist fills the floor as the surrounding lights glisten off the textured ground. This is truly a sight that you simply could not imagine occurring at Universal, and it’s a refreshing change of pace from the rest of the park. 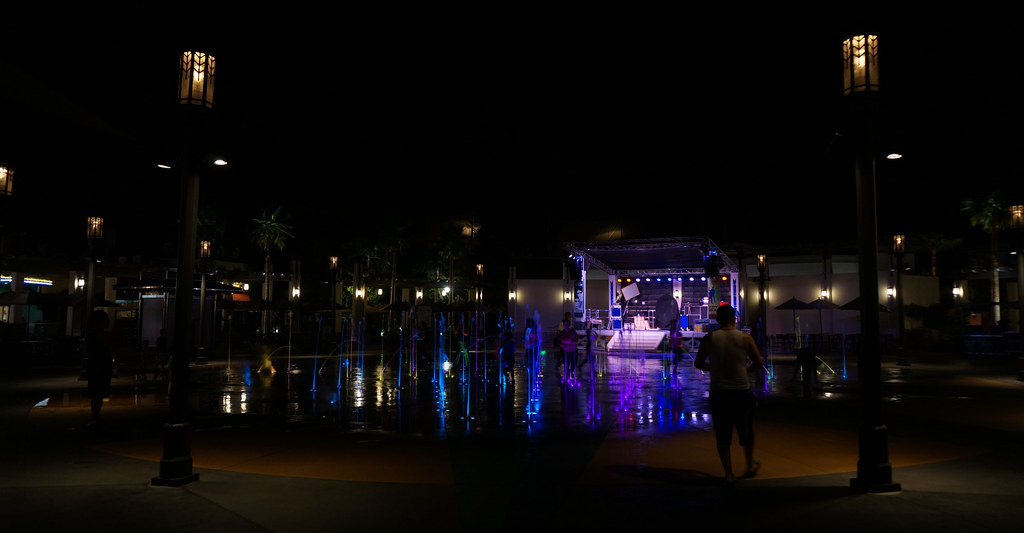 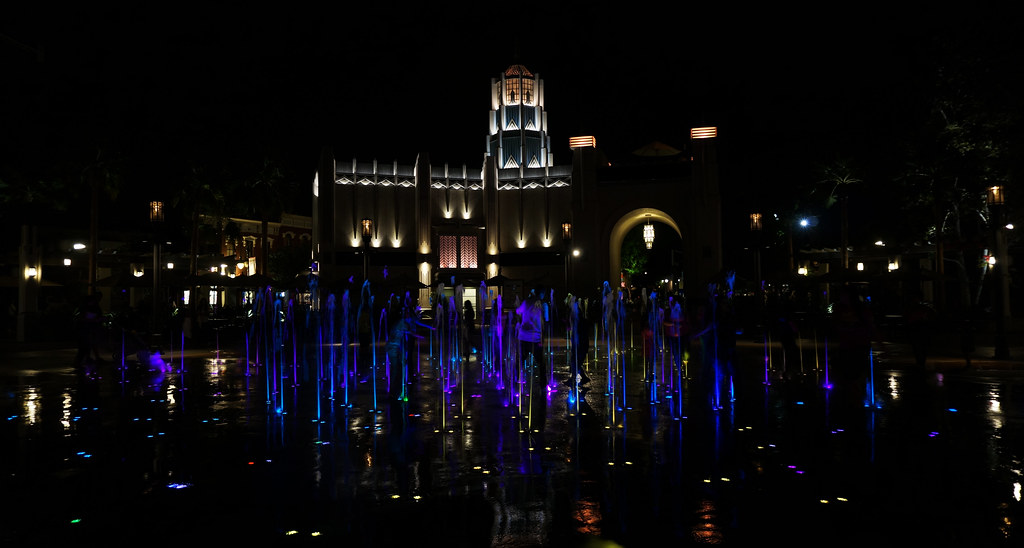 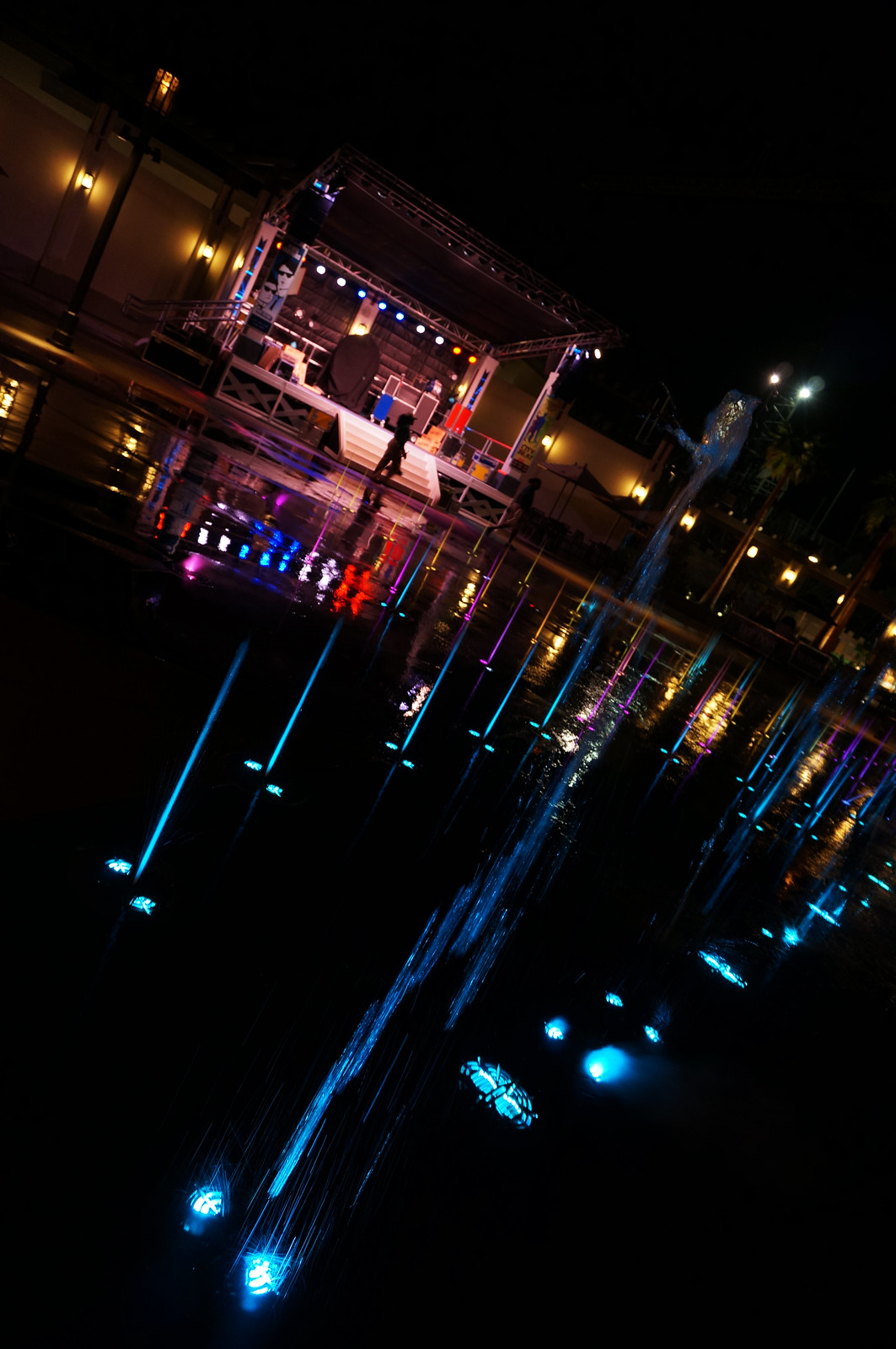 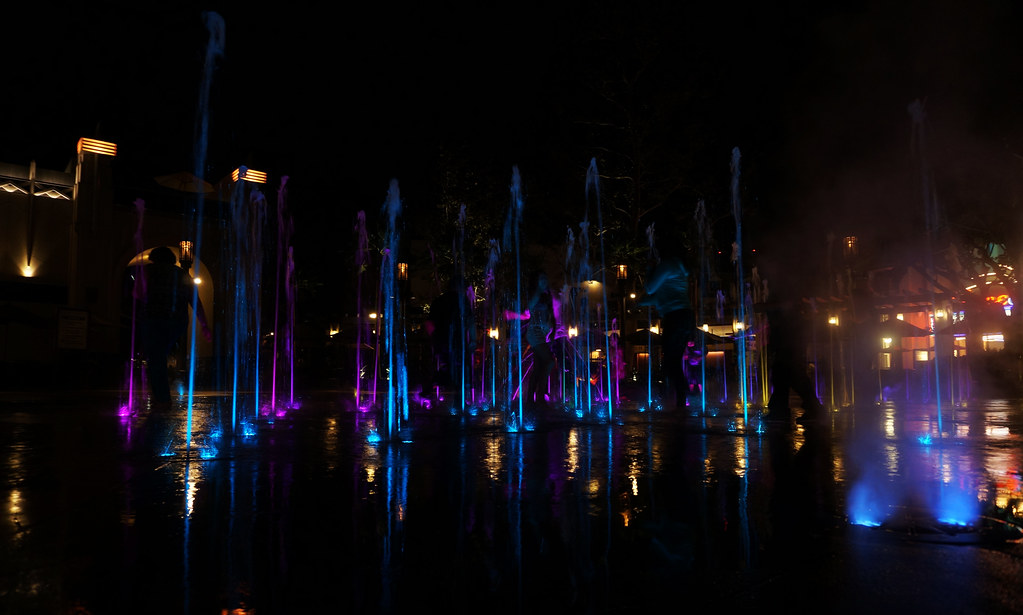 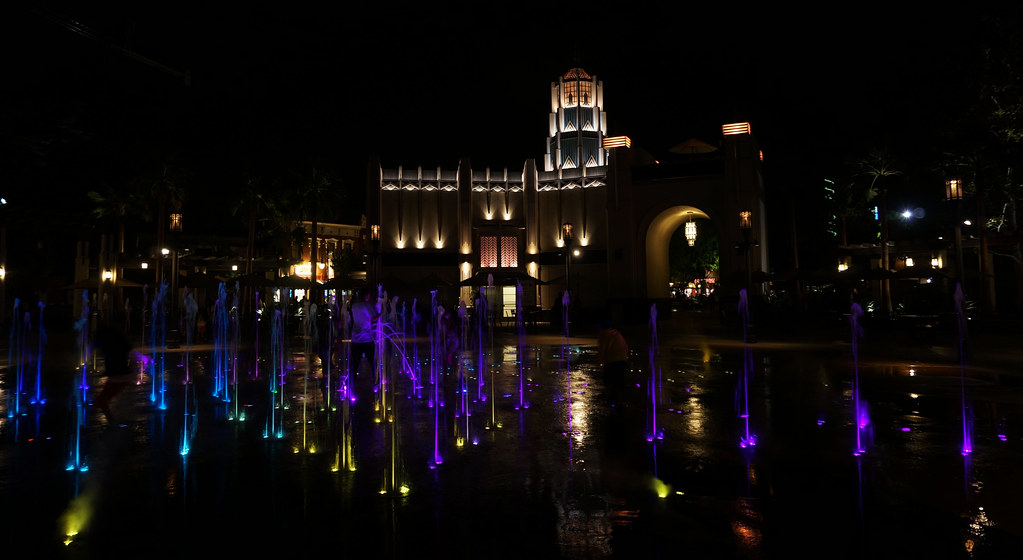 If you have an idea for a [Zoom Lens] column, be sure to submit your suggestion in the comments below. For now, thanks for reading and we’ll see you next month.