August 25, 2014 – The spot where Universal’s House of Horrors stands has a long history of change. It has been a restaurant twice – as the train themed Victoria Station, and as the Marvel Comics themed Marvel Mania – and has served as the location of countless walk through attractions, featuring things from Universal films such as The Grinch, Chicken Run, Small Soldiers, Van Helsing, and the Mummy.

After September, the House of Horrors will yet again change, to become a retail and dining experience. Exact details aren’t available yet, but there is much talk about the space. Will it be gutted and re-themed? Will it be removed entirely and rebuilt from the ground up? Or will it serve in a way no one is expecting yet?

No matter what it’s slated to become, Inside Universal has gone in-depth to provide horror fans and curious guests who haven’t yet braved the maze a look at what it is now. Our articles, attraction guide and supplemental videos – when viewed together – can provide fans with a complete virtual experience.

As the year-round maze begins to wind down, be sure to stay tuned to this page for updates on all of Inside Universal’s continuing coverage of Universal’s House of Horrors. 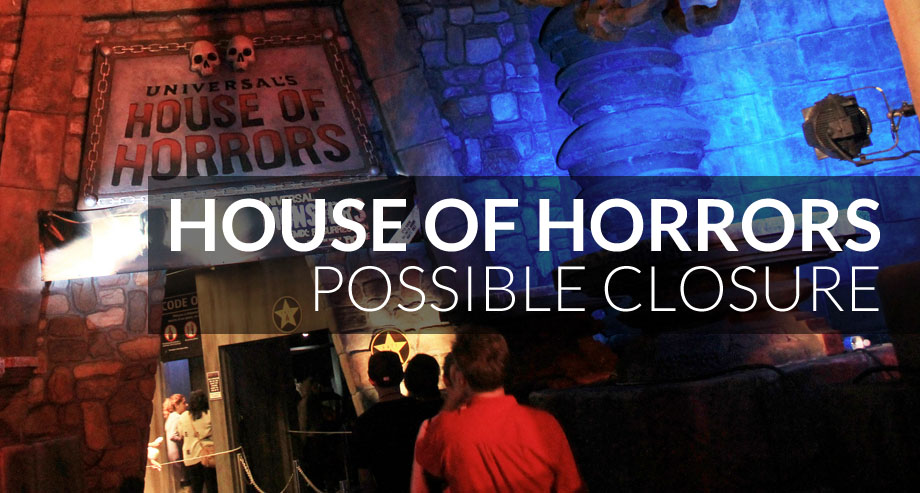 Inside Universal initially broke the news of Universal’s House of Horrors’ closure in late July, later confirming the story in mid-August.

While details were (and continue to be) sparse, Universal’s House of Horrors will likely be transformed into an entertainment, shopping and retail venue. To get a sense of how the story developed, be sure to read our initial report detailing House of Horror’s pending closure.

» Link: House of Horrors Will Close on September 1 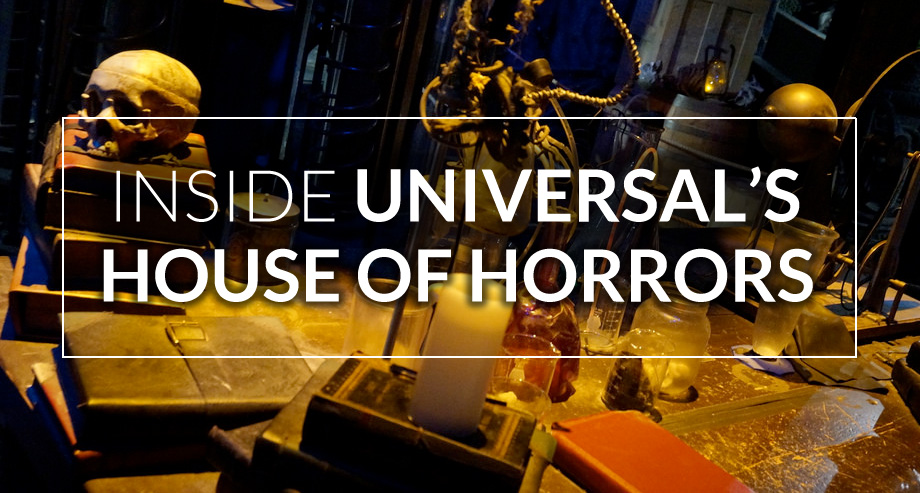 Take an extensive, in-depth look inside Universal’s House of Horrors, featuring a photo tour of the entire walkthrough maze!

» Link: Inside Universal’s House of Horrors

For those who have never been through Universal’s haunted maze, be sure to read our comprehensive attraction profile – featuring a general overview, tips and our take on Universal’s most intense attraction. 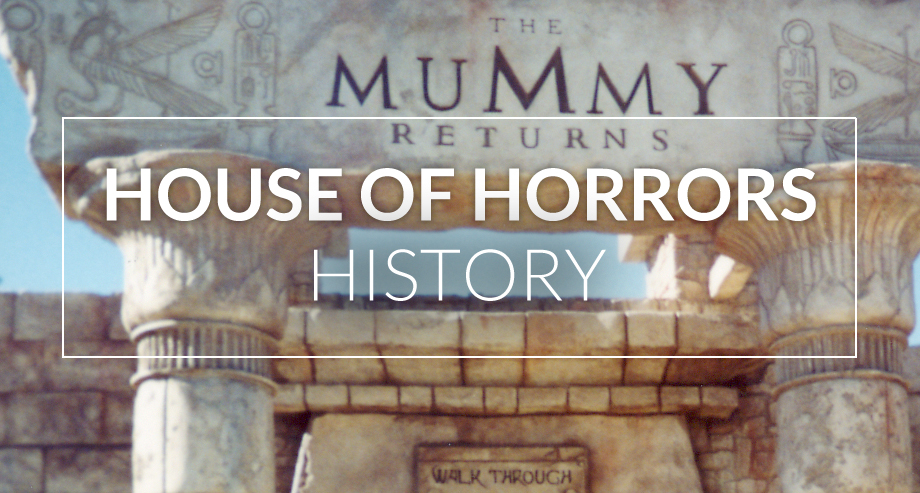 Learn about the development and progression of Universal’s House of Horrors in this retrospective article. Understand how House of Horrors progressed from the Chicken Run Maze to the Grinch’s lair and Van Helsing: Fortress Dracula.

» Link: The History of Universal’s House of Horrors 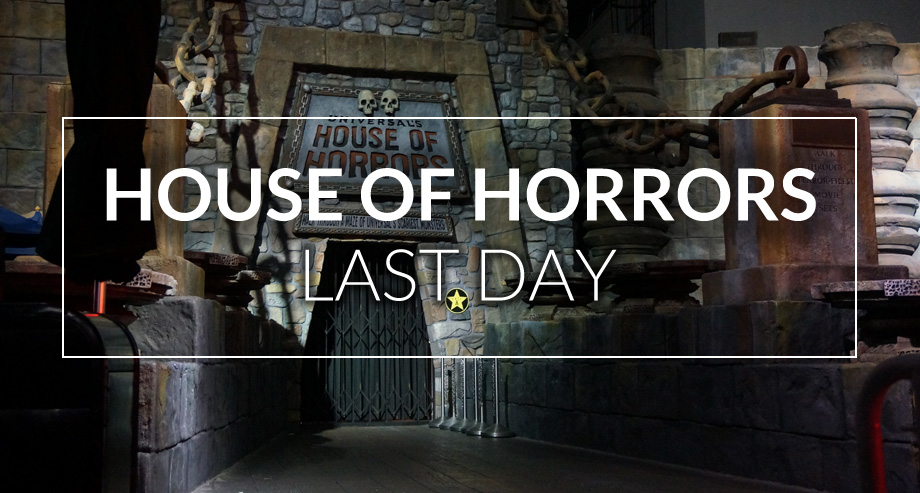 Inside Universal was on the scene to document Universal’s House of Horrors’ last day of operation. Witness the Universal monsters taking their last curtain call.

This video provides a look into Universal’s House of Horrors’ preshow video, featuring clips and segments from Universal’s classic horror films alongside a safety spiel designed to keep guests in check before their harrowing adventure. Remember, the scare actors will not touch you!

This walkthrough is the standard daytime maze available to all guests. As you venture into the House of Horrors, you’ll be taken into catacombs of skulls, an abandoned toy factory where Chucky waits, the Wolfman’s forest, Dracula’s lair, a twisted butcher’s shop where human is on the menu, and even the Bates Motel. Definitely not a trip for the faint of heart!

A few points of interest in the walkthrough: the animatronic figure of the Phantom of the Opera is a recycled and reprogrammed figure from the E.T. Adventure ride formerly housed where Revenge of the Mummy now stands. Another piece of E.T. is in a different area of the House as well – many trees and foliage from the queue of that ride are still used in the Wolfman’s forest scene of the maze too.

Experience the maze yet again – this time with a chilling twist. With the night vision walkthrough of the House of Horrors, you’ll see everything to gruesome detail – including things you’ll probably wish you didn’t notice.

This walkthrough experience really helps the detail stand out, from the costumes of the actors in the maze, to the depth of the decoration and prop work in some areas, such as the toy factory and the human butcher shop. Whether you’ve been through the maze before or not, this definitely takes the creepy vibe up a notch.

Watch House of Horrors’ last operational day with an emotional sendoff by fans and employees.

And there you have it – a complete look into the park’s macabre tribute to Universal’s horror film past. In the coming weeks, Inside Universal will be providing additional coverage of the closure of the attraction, as well as following the development of its replacement.

Universal’s House of Horrors closes to the general public on September 1. After that, it will operate only as a maze in the Halloween Horror Nights event, and close permanently at the conclusion of the event. Be sure to visit one last time before the House of Horrors is finally laid to rest!

Adriana made her first trip to Universal in 1995 during Nickelodeon’s Big Help-A-Thon, and was hooked from day one. Since that first trip, her passion for films and for Universal Studios has grown, and she continues to enjoy the park and its history today as an annual passholder and a reporter for Inside Universal. She hopes to one day become the president of park operations for Universal Studios Hollywood. Her areas of Universal expertise include Jurassic Park, the Beetlejuice Graveyard Revue, and the Studio Tour (As a result she also considers herself Inside Universal’s resident Bio-exorcist and Dinosaur Hunter).

Adriana currently resides in Los Angeles, and when she’s not at the park or working she’s probably buying Jurassic Park or Ghostbusters merchandise on eBay. You can reach her at her blog on Tumblr at MyUniversalExperience.tumblr.com, or at missb@insideuniversal.net.