It’s been 3 months since we’ve been able to get an up-close look at the progress of Jurassic Park’s yet-to-be-announced roller coaster, with the only updates coming from the friendly skies.

Today during Universal Orlando’s passholder preview reopening, we were able to get a good look at the coaster’s construction as the track begins to be installed.

Work continued on the coaster during Universal Orlando’s closure due to the Coronavirus pandemic in March. 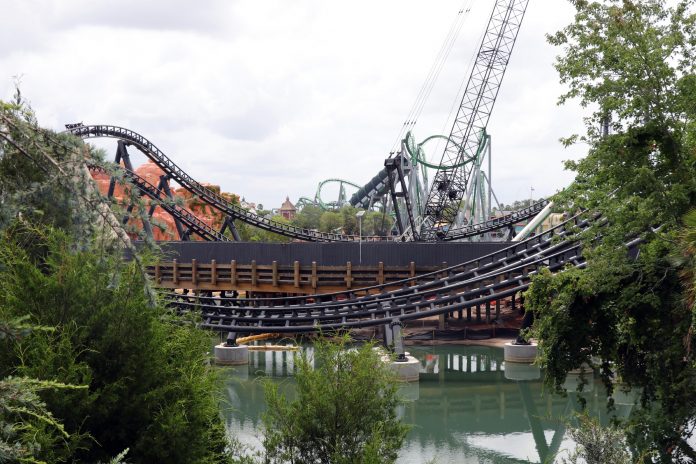 The coaster stretches across the coast of Jurassic Park, from Popeye & Bluto’s Bilge Rat Barges in Toon Lagoon running all the way near the outside area of the Three Broomsticks in the Wizarding World – Hogsmeade. The most noticeable aspect of the construction is the huge support to the left of the Visitor Center that towers into the sky. A bulk of the track has been installed in the helix near the Three Broomsticks. Other track pieces have been installed throughout the project’s construction area near Jurassic Park River Adventure, with the initial construction of thematic rockwork also beginning to appear.

While Universal hasn’t announced the project, it is believed to be based on the Velociraptor, with heavy ties to the Jurassic World franchise. The Raptor Encounter Meet & Greet just opened in a new location directly across from the future coaster, which should tie the whole area together. 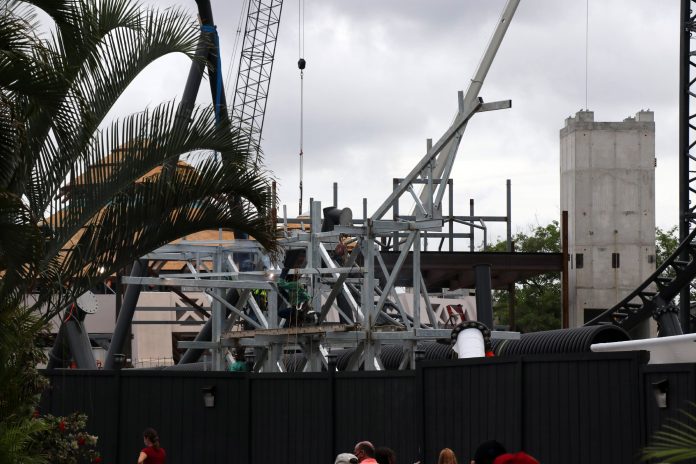 The question now becomes if Jurassic Park will be getting the Jurassic World overlay. If the new Raptor Encounter is any indication, it looks like it may be possible – but at this point, it’s just speculation on our end.

Stay tuned to Inside Universal for all the latest on the Jurassic Park coaster and the rest of Universal Parks & Resorts.