June 22, 2013 – Carbon copying isn’t new. Just look at Terminator, Jurassic Park, WaterWorld and Shrek – all of which have spawned multiple copies at Universal parks worldwide. So while fans may cringe to see their favorite attractions ruthlessly copied around the globe, most theme park guests couldn’t care less. To them, any addition to their local theme park of choice seems absolutely fine.

After all, most people don’t normally travel around the world to experience attractions that – in many respects – aren’t too different from their home-base attraction at home, and these guests are what drive the bulk of theme park attendance.

Fast-forward a few months after the debut of Transformers: The Ride 3D at Universal Studios Hollywood and imagine the surprise (or dismay, depending on who you ask) that Hollywood fans expressed when Universal Studios Florida announced a Transformers attraction of their very own. Perhaps a bit more intriguing: Florida’s version would be built in about a year. Groundbreaking, to say the least and damn near impossible in the world of Hollywood (after all, just look at the current progress of Universal Plaza).

So after a year of extraordinary progress, what’s the end result? More importantly, what are the differences – if any – between Hollywood’s Transformers and that of Florida’s? Read on to find out.

Let me be upfront: the bulk of both attractions are the same.

From what I gathered, Florida and Hollywood use the exact same ride footage, queue videos remain the same, and the technology behind both versions of Transformers are – for the most part – exactly the same across both coasts.

Press releases touting Florida’s projection enhancements don’t seem to be true, or at least aren’t discernible to the average guest or even the pickiest theme park enthusiast.

The main differences lie in the experience leading up to the ride. Translation: the facade and queue. Let me explain.

Make no mistake, Florida’s facade trumps Hollywood’s in every sense of the word. There’s absolutely no competition.

Optimus Prime looks fierce in his hero-esque pose, and there’s no denying the beauty of a practical prop in lieu of an oddly painted mural with billboard cutouts. Logistical and budgeting reasons be damned, I can feel the jealousy and simmering anger from Hollywood fans (and perhaps employees) as to why such an impressive statue couldn’t make its way to the Lower Lot – especially for an attraction that was specifically built for Universal Studios Hollywood.

Regardless of the reason, Optimus Prime’s statuette is impressive both during the day and at night. The statue comes fitted with impressive lighting effects and the nighttime lighting complements Optimus’ imposing figure. Whether or not it fits in with the rest of Universal Studios Florida, I’ll leave you to decide, but our editors have expressed some dismay at the perceived “cluttering up” of Florida’s skyline with this recent addition.

Speaking of clutter, let’s talk about that building.

I’ll be honest: from the photos I’ve seen, Florida’s building looks somewhat unusual and at times downright ugly. I know, I know, just look at our mural – but still. I’d rather have a plainly painted building than something that looks like it came from a showering of Prince’s Purple Rain.

But all jokes aside, the building looks absolutely fine in person. This really is a case in which photos can be deceiving.

Walking around the building, you get a sense that Florida tried to get the theming right with secretive barcodes, worn piping and other military props that litter the building.

Signs warning guests of restricted areas are commonplace, and the entire building screams military base with a rather cartoonish theme. Being that this is a theme park attraction, I’ll let it slide. But Florida’s exterior walks a fine line between careful theming and indistinguishable clutter. Speaking from my own perspective, I’m willing to lean towards the former, but I know many who believe in the latter. 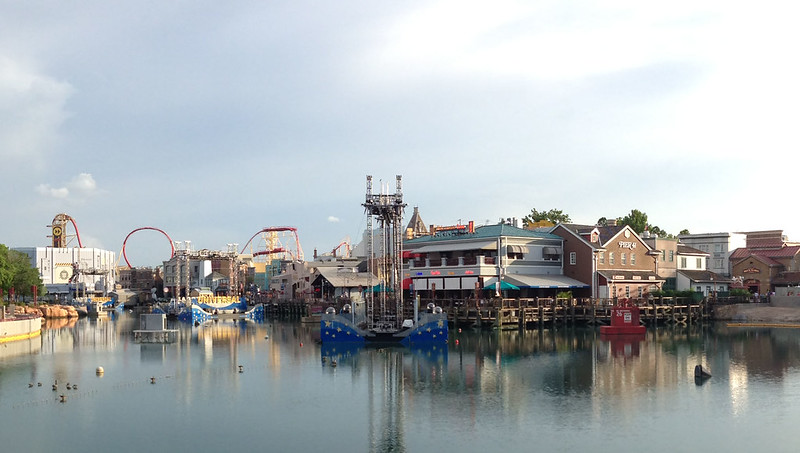 Regardless, I know that I like it, and I’m sure Hollywood would take Florida’s setup over what it currently has. After all, I know I would.

Unfortunately, the praise ends here. While Florida has a significantly longer single rider line, their entire queue experience pales in comparison to that of Hollywood’s. That’s a polarizing statement to make, but let me try to explain.

Editor’s Note: In light of some additional information, we’ve felt compelled to tell you the following: while Hollywood’s interior queue contains nearly twice the capacity of that of Florida’s, Florida does maintain an overall larger queue (in the form of exterior switchbacks). In any case, we’ve also been told that the spillover portion of the exterior queue does have contain decent shade protection. Regardless, we still believe that Hollywood still maintains a superior indoor experience.

We apologize for the error.

It’s no secret that Florida’s designers needed to make compromises in order to shrink an already small show building in the space of the former Hercules and Xena soundstage. The fact that they managed to do just that is an impressive feat – but regardless, Florida’s engineers needed to make a tradeoff.

While Hollywood fits the majority of its queue indoors, Florida needed to resort to a rather strange outdoor line composed of two sections: a covered area similar to Hollywood’s extended queue, and a spillover designed on top of the park’s existing walkway. While the covered area doesn’t seem out of the ordinary, Florida’s spillover seems messy and out of place – almost like an afterthought.

Not only does this spillover queue impede the flow of the surrounding traffic, it also lacks shade. This is deadly in Florida heat, and I hope Florida remedies this issue with future improvements. 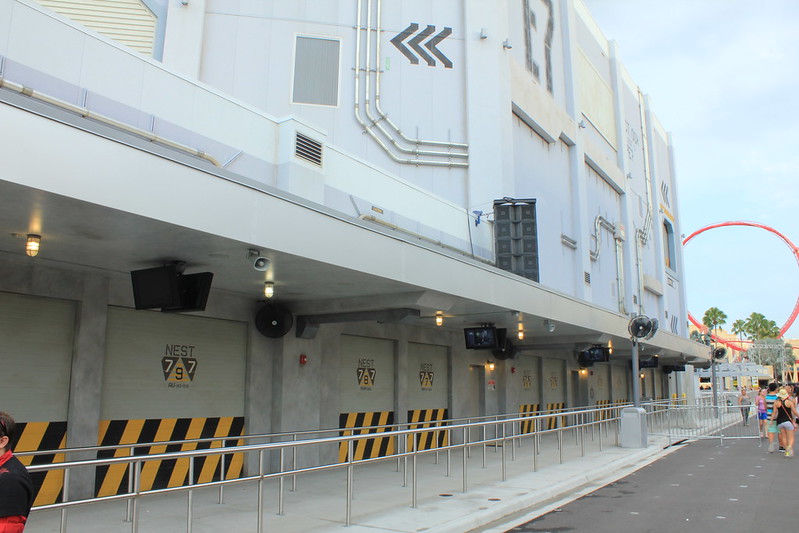 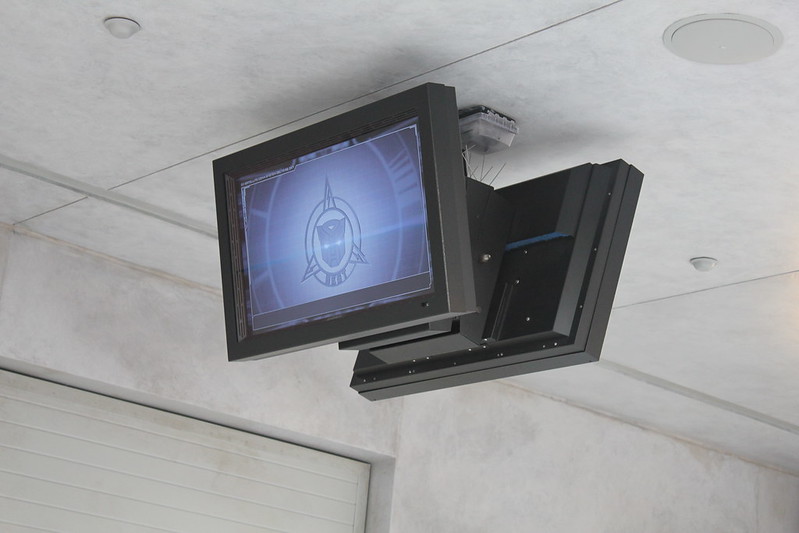 Spillover aside, both outdoor sections lack entertainment (televisions) throughout the majority of their layout. Only those that cluster near the building’s walls can watch Sonya Bradley’s introductory spiel – and that area alone is rather limited in its overall coverage. Luckily, things get better once you head inside. 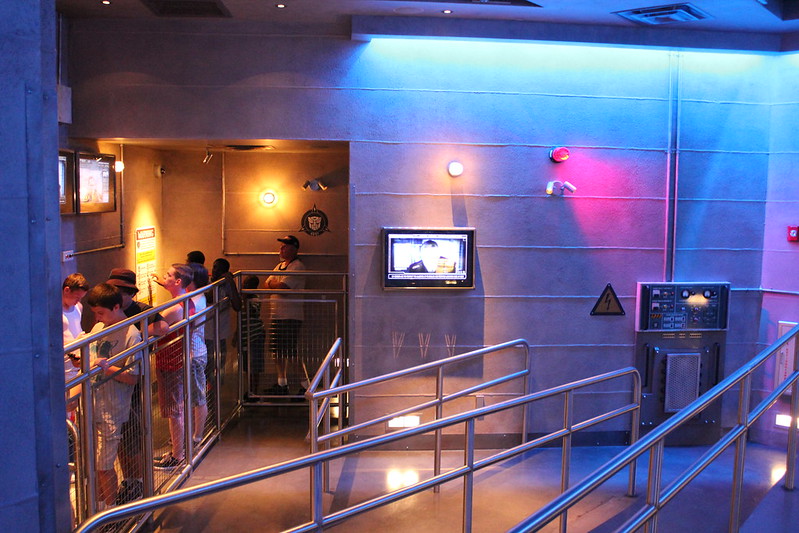 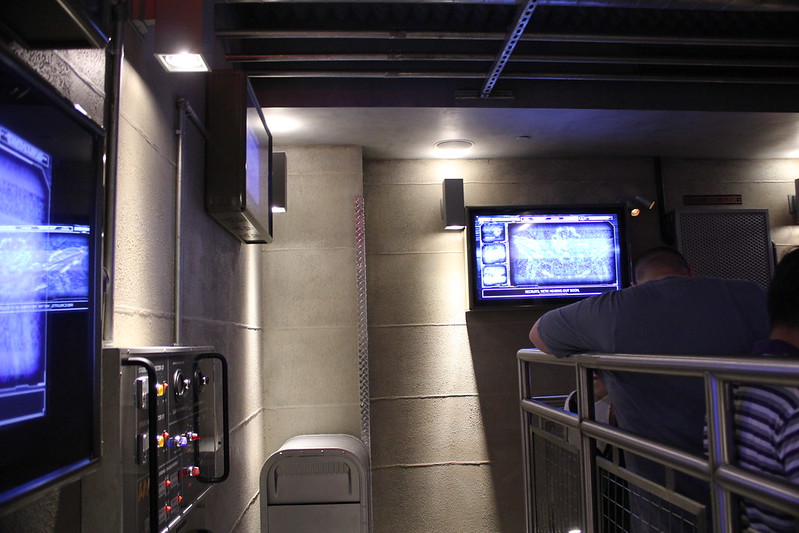 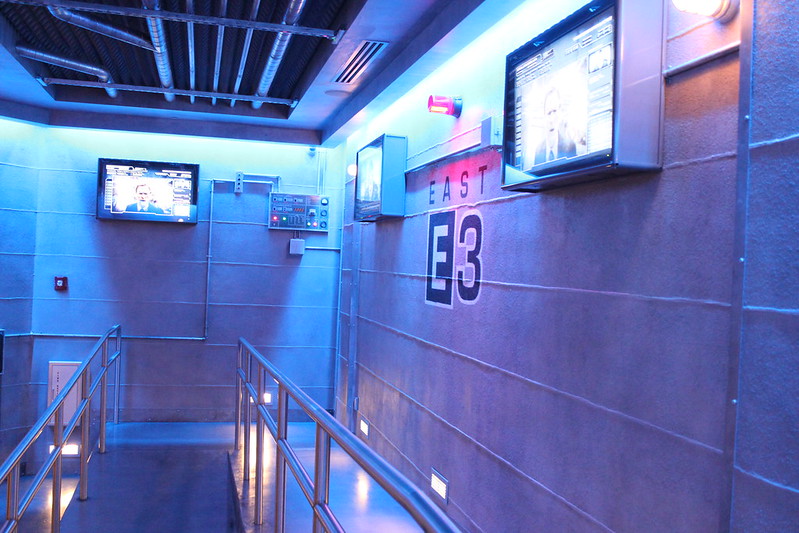 As expected, Florida’s interior queue lacks the capacity of that of Hollywood’s, despite Florida gaining a bit of height in their indoor experience. Though Florida’s interior queue retains all of the queue video used to spell out the attraction’s plot, its implementation seems more rushed and at times claustrophobic. In short, they don’t have the indoor waiting capacity of that of Hollywood’s – and it shows.

Among some other smaller changes to the queue: changes to the dispatch podium and the child swap room were noted (Florida’s child swap does not have a window to the ride, nor does it have Hollywood’s interactive elements), alongside some small improvements to their number plates.

The only major change here would be Florida’s more spacious loading deck and some apparent improvements in their attraction’s loading and unloading procedures – but we’re guessing Florida and Hollywood will exchange ideas in due time. Other than that, both queue experiences are similar and comparable. 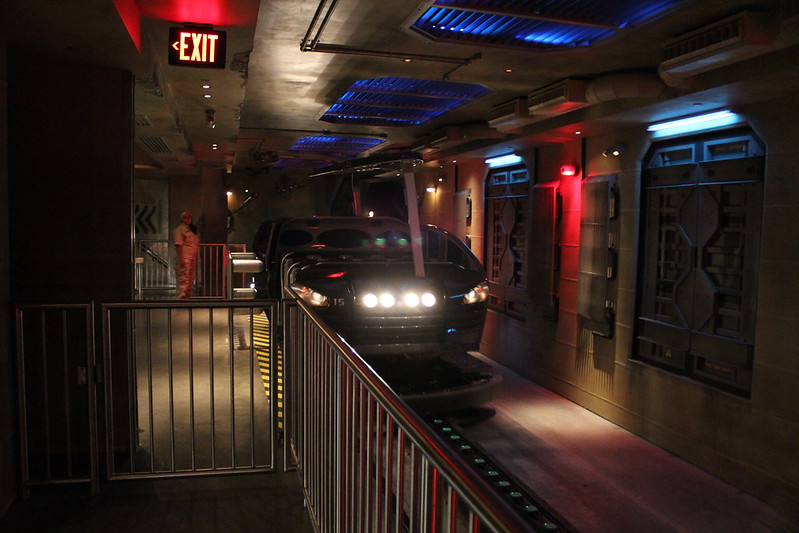 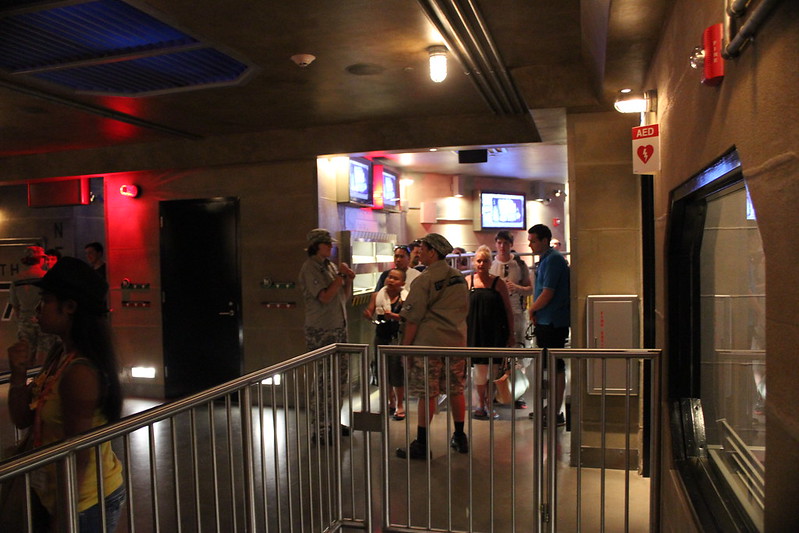 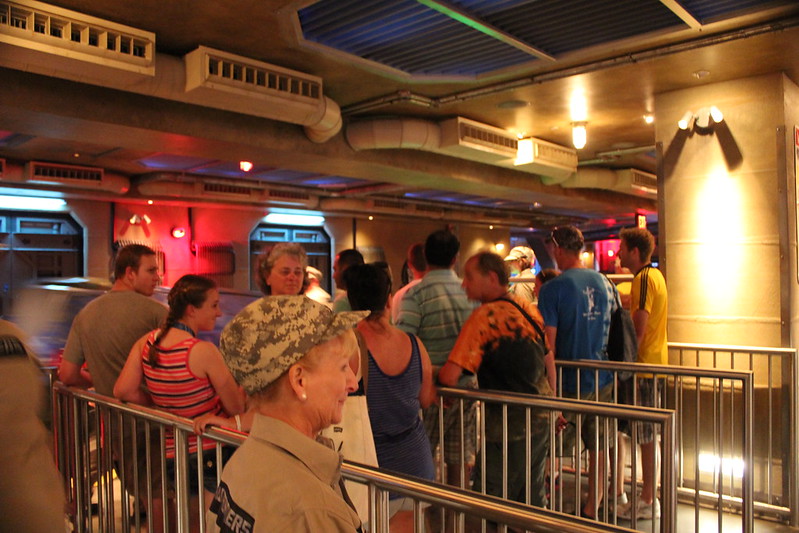 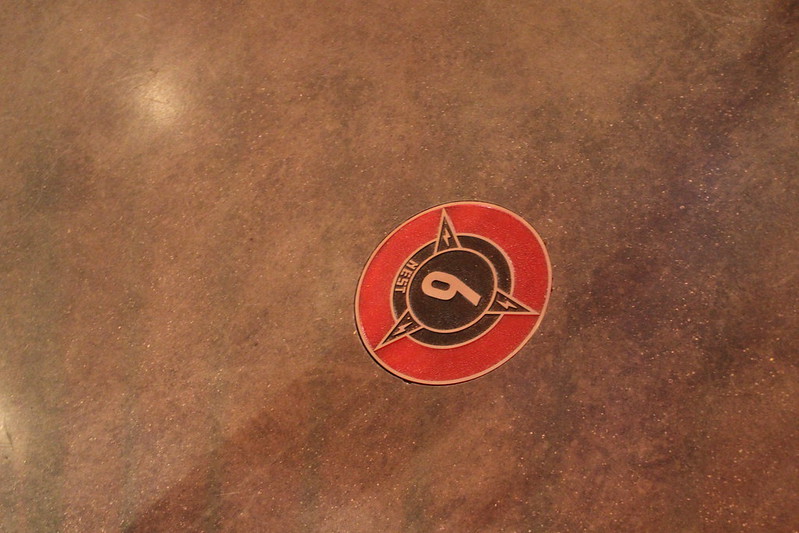 Didn’t you read the first half of this article? There aren’t supposed to be differences between Hollywood and Florida’s actual ride experience. That’s the whole point of carbon copies, no?

Okay, if you insist there are differences, you’d actually be right. Here’s what our picky-Hollywood eyes noticed:

First off, the first video wall that you see (which displays the Deception’s attack routes) has been streamlined into one single – albeit smaller – LCD display. Seems like a smart, minor improvement.

Second, for whatever reason, the images displayed throughout Florida’s ride appeared to be “zoomed in” – if that makes any sense. It’s not that the screens themselves are bigger than Hollywood’s (we’ve been assured that this wasn’t the case), it just appears as if Florida has a slightly more “immersive” experience. It’s a small difference and one that doesn’t necessarily affect the actual ride experience, but a slight discrepancy a picky theme park enthusiast might pick up. I don’t want to overblow this ever-so-slight difference.

Other than that, both rides are identical. Sound, video – everything. We’ve heard rumors that Florida has some improvements in the clarity of their projection system – something we can assure you that doesn’t appear to be true (at least from a guest’s perspective).

Again, this “zoomed in” effect that we mentioned before doesn’t equate to any improvements in image quality that we could discern – and we were a party of two that came to two similar conclusions. There might be some changes behind-the-scenes, but none that we could tell as normal theme park guests.

To wrap things up: Florida has the better facade, Hollywood has the better queue. Both have practically the same ride experiences with some minor differences – none of which improve or detract from Transformer’s overarching vision.

Regardless, Universal Studios Florida achieved something remarkable in the theme park business by building an attraction of this scale in about a year. That’s unheard of, and the team over at Orlando should receive considerable praise for their work. Plus, nothing was taken out to make this attraction possible. That in itself should make Florida fans happy.

That being said, Hollywood fans – don’t fret too much. For once, Hollywood finally gets the better queue. Just don’t pay attention to Florida’s statue of Optimus Prime. Or their show building.