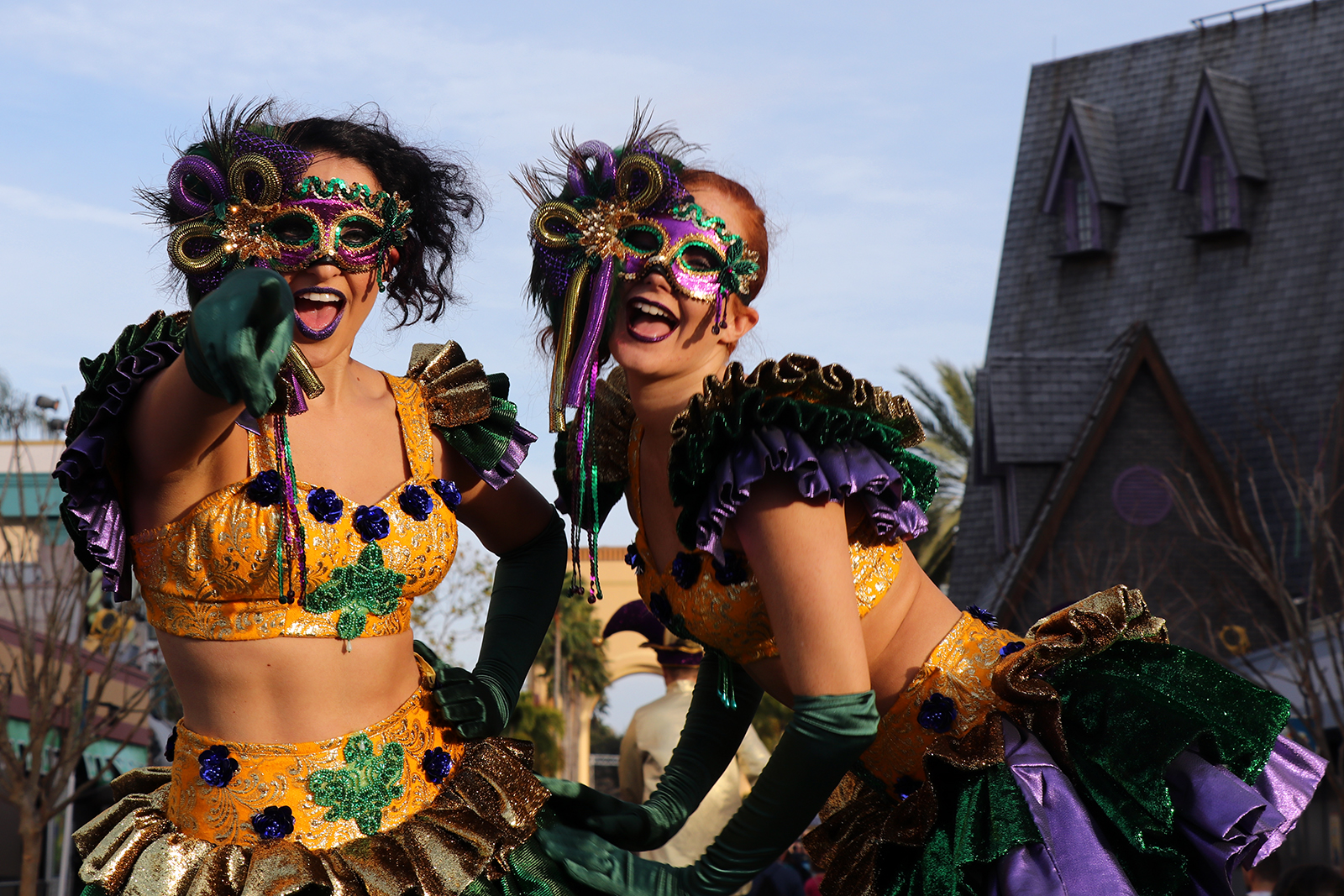 From February 9 through April 4, guests will let the good times roll as they experience an authentic, family-friendly version of the Mardi Gras bash at Universal Studios Florida. The event will be held for 55 nights – with the food courtyard open and the parade taking place every night.

Mardi Gras at Universal Orlando is designed to be family friendly and is included with park admission. Once the parade starts, Universal’s rides and attractions will close. Universal’s Cinematic Spectacular will not be held during Mardi Gras Nights. The event occurs rain or shine; so if rain is in the forecast, bring an umbrella. The Mardi Gras Parade runs each night of the event, while concerts are held on weekends.

Universal Orlando’s Mardi Gras celebration is included with admission to Universal Studios Florida or with an annual pass. Seasonal Passholders are completely blacked out on Mardi Gras concert days.

Before enjoying the live concerts, guests can dance along with dozens of energetic street performers and collect beads by the handful as the Mardi Gras parade winds through the streets of Universal Studios.The floats are made by Kern Studios, the same company that has created Mardi Gras floats for the event in New Orleans since 1947.

The parade will have different start times depending on the night you go:

Some of the same floats from previous years will be featured – like the traditional favorites the Krewe, King Gator, Riverboat, King & Queen – but will also feature 6 newly-designed floats, rounding out the line-up to 12 total. The new parade floats are themed to “party animals” – featuring animals from different biomes, and they include:

To ensure a good spot to view the parade, we recommend picking out a location about an hour before the parade starts, especially during weekend/concert nights. Weekday parades are expected to be less crowded but that does not mean large crowds aren’t possible, especially during Spring Break time. 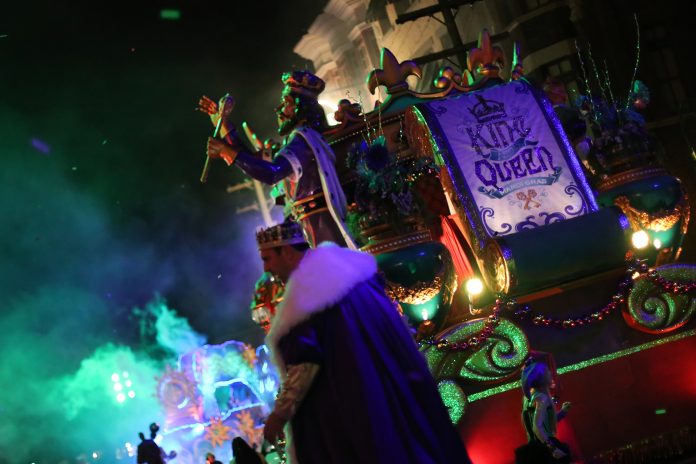 The parade makes 2 stops to perform a mini-celebration/dance number and release confetti in the sky. The stops are made down Hollywood Blvd and in New York by the Revenge of the Mummy attraction. These locations are more likely to attract a bigger crowd, so make sure to arrive there earlier.

If you’re traveling with children, kids get their own private parade experience in the Little Jester’s Parade Viewing Area located in front of the Brown Derby Hat Shop. In addition, several ADA viewing areas will be set up along the parade route for those in need. Make sure to ask a Universal Team Member ahead of time so you can plan accordingly.

Universal Studios’ rides and attractions will close when the parade starts.

We do have to stress that while it is fun to catch the beads tossed from the floats, please be mindful of your surroundings and other guests around you.

If you want to experience being a part of the Mardi Gras, you’re in luck! A limited number of guests can be part of the festivities and ride through the streets of Universal Studios on one of the floats, tossing beads to the crowd. There are some restrictions, however:

Annual Passholders get priority selection. To reserve a spot, you can fill out the RSVP form to request a date. If you’re selected, you’ll be notified a few days prior to the event. Make sure to bring a valid photo ID matching the name on the reservation confirmation to the Studio Audience Center to receive your wristbands.

However, there may be last minute float spots available as Universal employees may ask guests if they are interested in taking part in the night’s parade. The selection is completely random and is “first come, first serve”. Expect spots to be harder to find during busier nights.

As the sun sets, Universal Orlando opens the French Quarter Courtyard. Guests can enjoy music from authentic New Orleans bands while chowing down on some authentic Cajun cuisine.

The courtyard, which is located in the New York section of the park, officially opens up at 4 PM and will be open every night during Mardi Gras.

Parade performers will be out and about around the Courtyard before the parade starts for some fun, dancing, and photos!

If you plan on eating at the French Quarter Courtyard, there is a variety of options to chose from. Universal is now offering the new tasting size option – allowing guests the chance to indulge in all of this year’s dishes, or sample just a few.

Guests can find Nawlin’ favorites like jambalaya, gumbo, andouille sausage, beignets and much more. Po’ boys are being offered in different varieties – including Fried catfish, shrimp & andouille sausage, and chicken. Crab Etouffee is a classic dish, served with rice and crab smothered in a savory sauce. It wouldn’t be a Mardi Gras celebration without the traditional King Cake. Twisted taters are returning, featuring a new Cajun seasoning twist.

There are also a variety of specialty cocktails guests can enjoy in the French Quarter courtyard – and new to this year’s event is a dedicated mimosa bar – with unique flavors ranging from caramel apple to raspberry rosemary.

For a non-alcoholic option, the Bayou Bog Water is available – complete with gummy worms and fish, blueberry boba beads and a lemonade and ginger ale mix.

Located in the extended Transformers queue, a large bar area has been set up – serving beer, basic cocktails, and the event’s signature drinks.

Since the food at Mardi Gras now comes on small, sample size plates – Universal is offering a “Tasting Lanyard”, allowing guests the chance to try different menu items all for one price. The lanyard can be used on any Mardi Gras night, and any unused items can be rolled over.  Here’s a breakdown on options and pricing:

Only items designated with a special Universal globe icon are part of the deal. Alcohol is included but comes in a 9oz tasting glass. Water and sodas are also included in the lanyard. You can rollover unused items during any Mardi Gras day, and it can be reloaded until 4/4. Any unused value does not expire, so you can purchase snacks including soft pretzels, popcorn, and bottled water during normal hours.

New this year is the Mimosa Bar, which offers 8 different flavors to enjoy for just $10.99+ tax. Located in Cafe La Bamba, right near the entrance to Central Park, guests can enjoy a drink while relaxing in a quiet lounge area before the parade starts.

Universal is also offering several new options to enjoy the parade while enjoying some Cajun cuisine.

The Bayou Boil is available on select nights and offers all-you-can-enjoy Louisiana-style boil, with a reserved parade viewing spot. For $59.99+tax ($39.99+tax for children 3-9), the boil features crawfish, shrimp, potatoes, and corn-on-the-cob. Not a seafood fan? Then enjoy chicken and andouille sausage jambalaya on request. Annual Passholders do get a discount, but they must reserve in person. Space is limited, however.

You can either reserve your spot online, or find the tent located in Battery Park, right across from Mel’s Drive-In. The reserved viewing location is located right in front of the Pantages Theatre Courtyard, where you’ll also be treated to King Cake, beignets, sparkling wine (21+ with valid ID) and assorted non-alcoholic beverages.

Guests can enjoy a reserved viewing area for both the Mardi Gras parade and Universal Orlando’s Cinematic Celebration. For $49.99+tax ($29.99+tax for children 3-9), guests can watch the parade from Pantages Theatre Courtyard while enjoying an assortment of non-alcoholic drinks. After the parade, you’ll be escorted to another designed viewing area to enjoy Cinematic Celebration while being able to sample specialty desserts, sparkling wine, sparkling cider (21+ with valid ID) and other non-alcoholic beverages.

Concerts take place at the Universal Music Plaza Stage. Depending on the act, guests may begin to line-up early in the morning. If your sole purpose for attending Mardi Gras is for the musical act, we recommend skipping the parade to ensure a good spot to view the concert.

Concerts begin shortly after the parade ends and are scheduled to take place at 8:30 pm. The duration of the concert varies but usually lasts for an hour to an hour and a half. 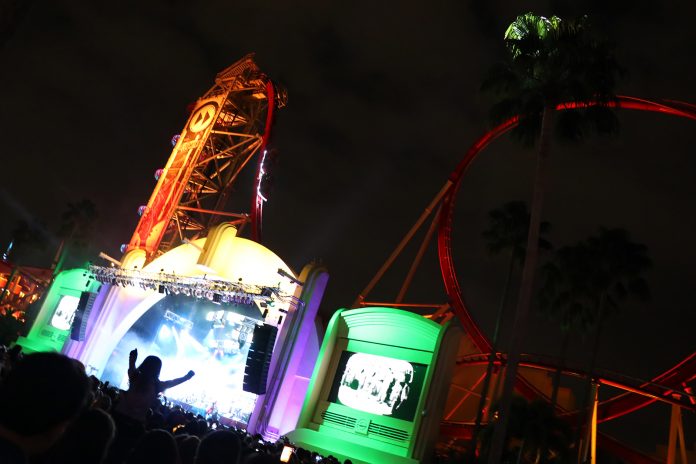 The Music Plaza stage is Standing Room only. For those traveling with children, please be mindful of those around you and try to refrain from hoisting kids up to sit on your shoulders. It’s an obstruction to other guests who are trying to view the concert, but also can present itself as a safety issue. If you MUST lift your child so they can see the concert, try to keep them level with your head.

The viewing area for hearing and visually impaired guests is located at the far left side of the stage, near the Hollywood Rip Ride Rockit entrance. Wheelchair viewing is located along the concrete walkway on either side of the tech booth near the back of the Music Stage plaza.

As a passholder, Universal gives some great perks for the Mardi Gras event. This year, the perks include:

Mardi Gras has tolerable crowds for most of the event. With the event spanning over 50+ nights, weekdays are known to be less crowded. However, the event can bring in some heavy traffic, especially during a Holiday weekend or “Spring Break” time. As a general rule of thumb, any Mardi Gras weekend that features 2 acts are the weekends where Universal expects huge turnouts, so plan accordingly. We recommend adding an extra 30-40 minutes of time to plan for your parade/concert viewing spot. 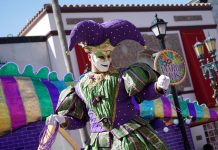