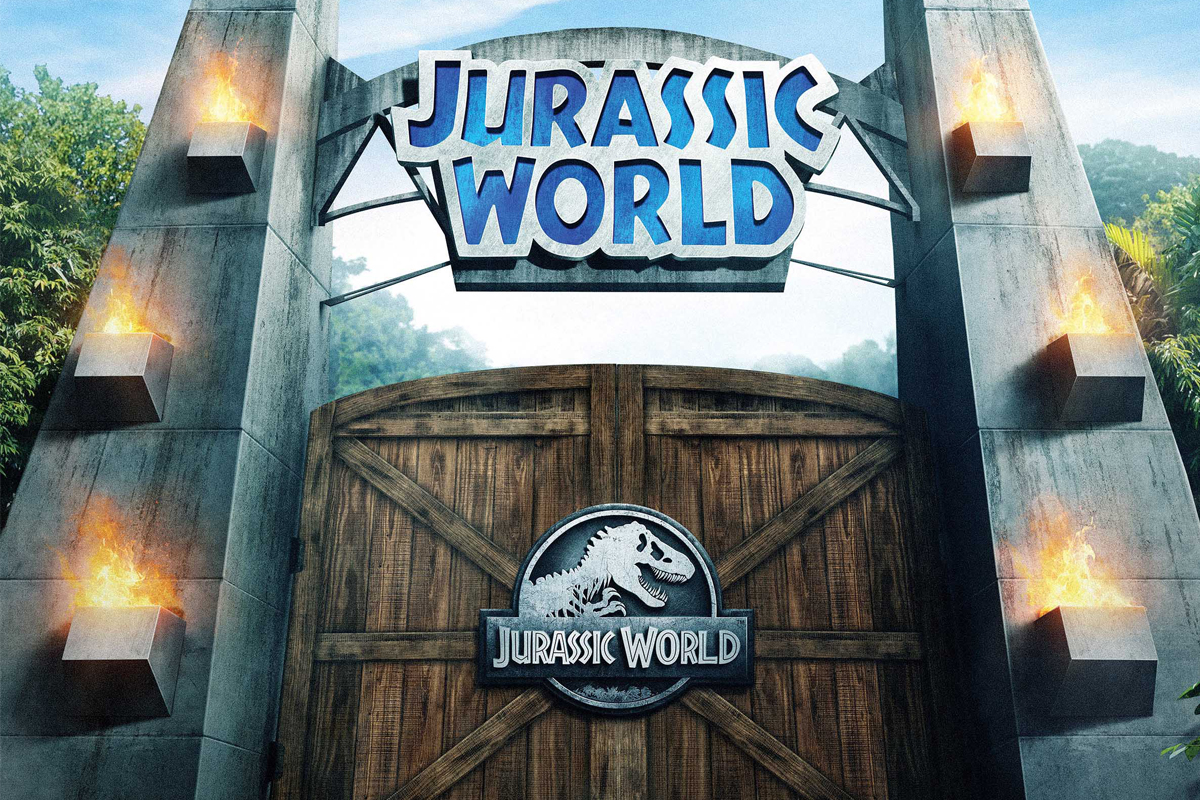 Universal Studios Hollywood has seen a record amount of changes over the past seven years; a direct result of increased popularity for theme parks around the world and the impact that Comcast has committed to spending year over year.

While Universal fans have always accepted the fact of change within its parks, due to the removal of many classic attractions – there is always a bright future waiting ahead, filled with excitement and curiosity.  At Inside Universal, we have compiled a list of our “Top 10” most exciting events that took place at Universal Studios Hollywood for 2018. 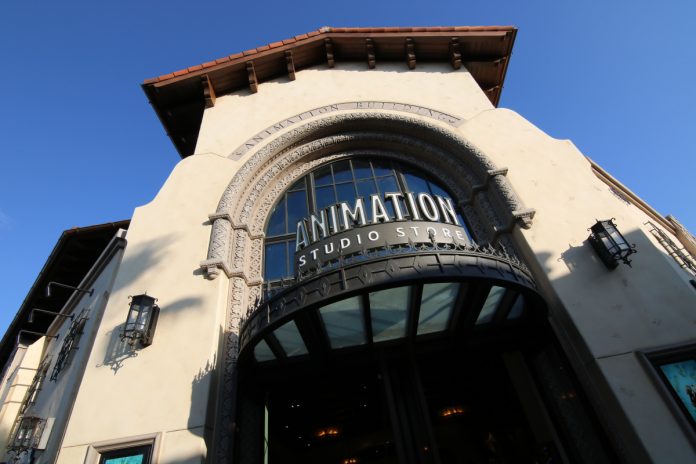 Capping off the Main Entrance of Universal Studios Hollywood was the finalization of “Universal Boulevard” – a refresh of the opening experience while guests enter the park, as well as an increase in retail and quick service options before exiting at the end of the day.

For park amenities, the Laemmle Court area was added along with a Family Center, as well as warehouse storage and offices for theme park operations. 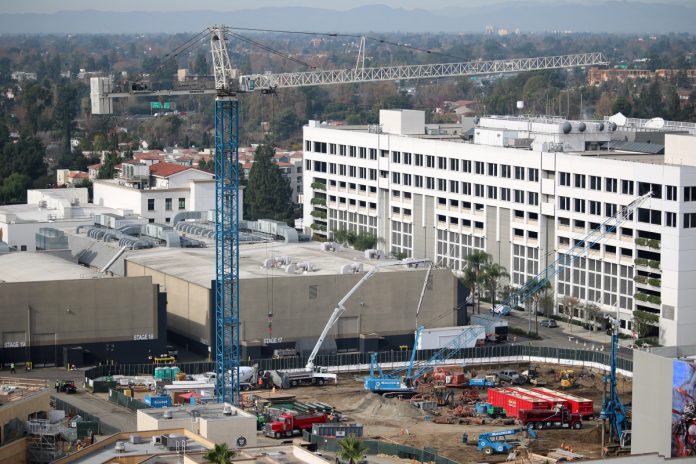 9. Super Nintendo World on the Horizon

Nintendo at #9 you ask?  Without a doubt, this will become the major influence for much of the park expansion over the next few years. The Starway Escalator finally saw its upgrades completed this year in preparation of the upcoming Lower Lot growth, but the story for Super Nintendo World goes far beyond just theme park growth.

There have been many circling theories about the location and size of Super Nintendo World for Universal Studios Hollywood. Other attractions were suggested for being the priority for the removal of Sound Stages 22-25, but with the complexity of fast change in a constantly evolving environment – Nintendo had to meet its deadline. While this will be an ongoing discussion for years to come, Nintendo has already made its mark on the theme park and the Studio Front Lot.  Stay tuned… 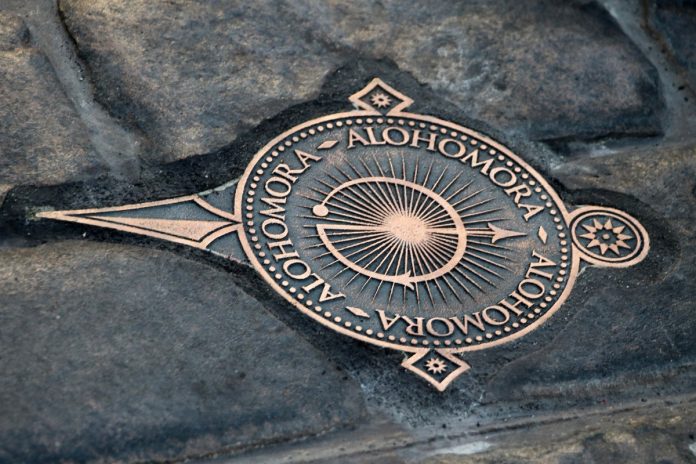 With everything inside the business of theme parks, some things work, some things sell, and some things don’t. The Wizarding World of Harry Potter has seen absolute success at driving the attendance spike for Universal Studios Hollywood.

However, there are little things that can always be adjusted to maximize entertainment value and profit success.

In 2018, we saw the removal of the Hogwarts Express Photo Opportunity in favor of another themed gift shop; but a major addition to the land was the all-new interactive spells. The “Alohamora” unlocking spell and “Incendio” fire spell utilized the once-empty space in Hollywood’s version of Hogsmeade – giving new unique experiences for interactive wand owners.

Smaller additions – such as Madam Malkin’s Talking Mirror inside the Dervish and Banges gift shop, as well as hard-packed Butterbeer Ice Cream (We want Soft Serve!) – rounded out most of the minor additions that we saw for West Coast Potter fans. 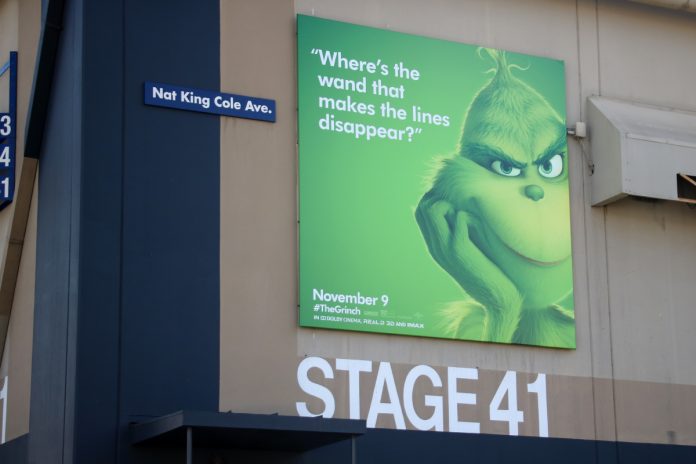 Once in a few years, we get to see something truly unique with Universal Studios.  There is a subtle approach which has always been offbeat and humorous when it comes to Universal and its fan base. Unlike other major theme parks, Universal has always had that connection with pointing the finger at itself (e.g. The Simpsons Ride, Bill and Ted’s Excellent Halloween Adventure, Chucky’s Insult Emporium). These are characteristics that only true Universal fans can come to appreciate because of an ongoing relationship between the guest experience and these properties.

When The Grinch was released in theaters in November, Universal marketed the film with snarky billboards throughout the country – with many of the ads uniquely targeting the citizens of each city.  The three billboards chosen for Universal Studios Hollywood were brilliant and speak for themselves!

Sadly, they only lasted a few days before they were removed and replaced with more “generic” messages seen throughout California. 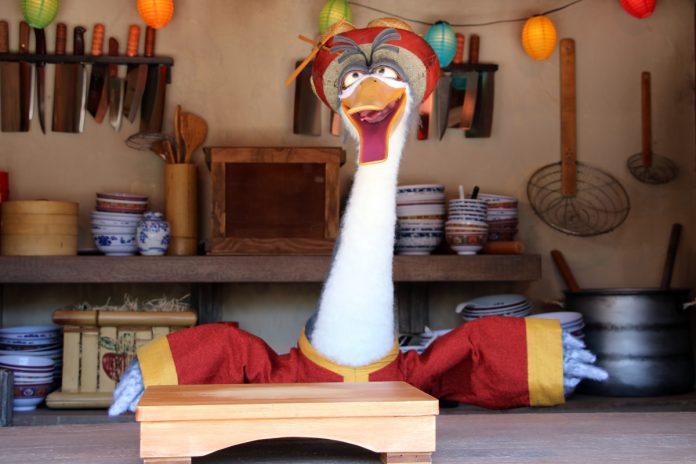 The Lunar New Year has become the newest seasonal event for many West Coast theme parks.

After Universal acquired the rights for Dreamworks Animation, they offered a very unique experience for Kung Fu Panda fans beyond the new attraction.  Mr. Ping’s Noodle Shop, which sold actual authentic cuisine, was built within the Universal Plaza to become a focal point for an all-new interactive experience for guests. Some can say that the level of detail for Lunar New Year 2018 at Universal was very close to the quality of Grinchmas – without the heavy crowds of the holiday season.

Mr. Ping did return briefly for the summer of 2018 again within the Universal Plaza, with even more detail.  Universal fans can only hope that one day, Mr. Ping will find a permanent location within the park for all day guests to experience year-round. 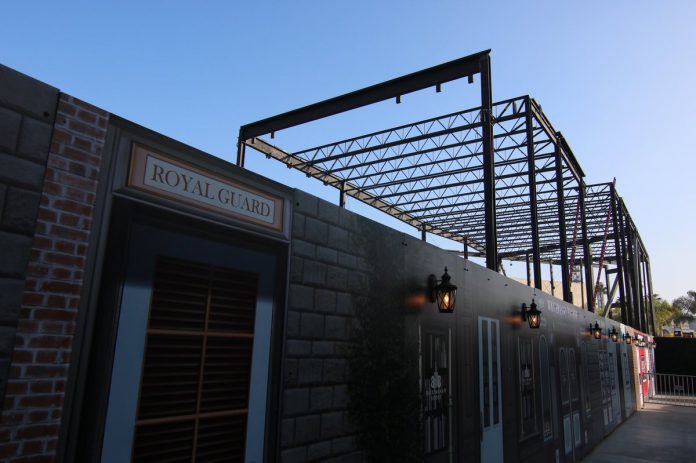 The Secret Life of Pets attraction has shared much of the same story as Super Nintendo World. After many revisions and many relocations, Secret Life of Pets appears to be finally moving forward with vertical construction. The Globe Theater has become the new location to build the new attraction, and progress seems to be in full momentum. Of course, those plans have not been confirmed by Universal.

Although we do not believe that this final version of the ride will be as technologically advanced as what was expected from previously rumored incarnations, we do expect there to be a much-needed attraction bump in the Upper Lot targeted at a younger audience. Perhaps a future land expansion will come with Illumination properties, or perhaps we will have a new ride without any screens?  We will just have to wait and see. 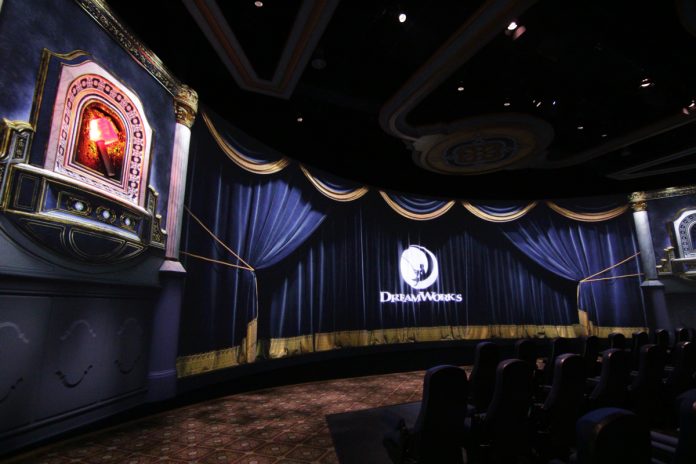 Wow! Shrek 4D lasted longer than Back to the Future: The Ride!?!

Needless to say, Shrek 4D had finally seen its day. While the Wizarding World did move in on much of the Shrek 4D footprint, Universal executives decided to keep the theater intact and offer a complete remodel for a similar, yet upgraded attraction.  With the recent acquisition of Dreamworks Animation, Universal took this opportunity to bring a quality, family attraction into the park.

Why is this influential, you may ask?

As promoted by Karen Irwin, President and Chief Operating Officer of Universal Studios Hollywood, the Dreamworks Theater was designed to be a rotating attraction which can have a new film installed with quick turnaround and little impact to park operations.

Not only does Kung Fu Panda now offer a more rich experience for Lunar New Year guests, but it also has the potential to offer a slightly new experience every few years.  Still, it remains to be seen if Universal will continue with this option for the future. For now, the all-new attraction may have not been the biggest highlight in 2018, but it did prove that family attractions are a focus going forward. 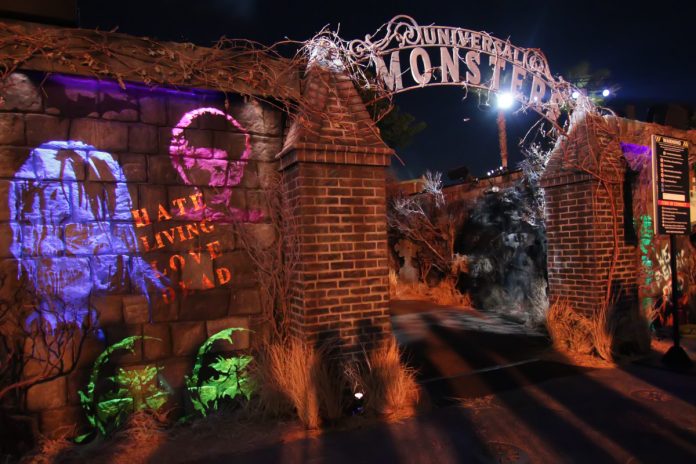 Halloween Horror Nights has seen a tremendous explosion of attendance in recent years. The phenomenon, which originated in Orlando, continues to spread its wings in the West Coast. While the flare is unique for Universal Studios Hollywood, the approach to much of the excitement is the same.

Netflix’s Stranger Things brought enormous interest from an all-new generation of horror fans. Demand was so great, Universal Studios Hollywood allowed daytime guests to experience a “lights on” walkthrough of the maze.

The Universal Monsters maze was a highlight for many this year. The maze was located inside Universal Plaza and the Parisian Courtyard area of the park, which has not always been the easiest for quality maze operations (the maze is split into two sections, with a crossover walkway in between for daytime guests).

The Monsters have always been a property which Hollywood fans adore. With the recent 2015 removal of the House of Horrors maze and the long-removed classic Beetlejuice’s Rockin’ Graveyard Revue, the Universal Monsters haven’t been a primary focus at the original Universal park for years.

With a soundtrack composed by legendary guitarist, Slash, along with increased gore and focus on fear – Horror Nights designed a completely original maze that gave Horror and Monster fans something that they’ve been waiting to see for a long time. 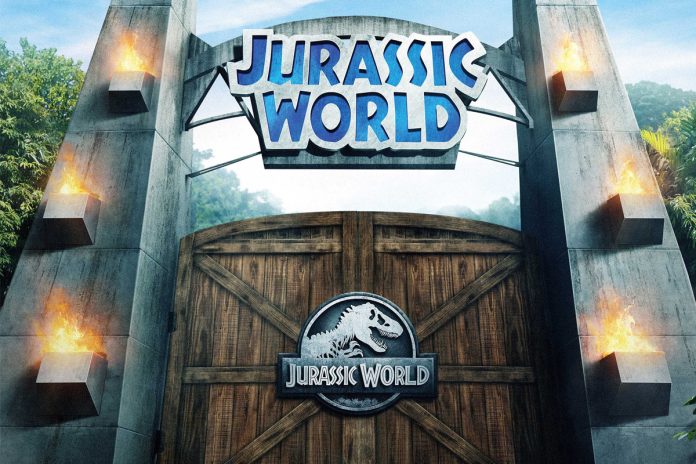 In May 2018, Universal Studios Hollywood announced that Jurassic Park: The Ride would undergo a year-long renovation and transition to Jurassic World.

Jurassic Park: The Ride placed Universal Studios Hollywood on the map when it opened in 1996, reaching the highest one-day attendance ever recorded – holding that title until King Kong 360 – 3D opened in 2010. As the ride’s closure drew near, it was time for many to say goodbye to a beloved fan favorite.

Although we learned that the ride system was going to remain intact, the extent of how far the experience will change still remains a mystery. What we do know is that the refurbishment is set to overhaul and modernize scenes throughout the existing ride design to bring the current Jurassic World story to life. We closely watch today as the ride continues to take on a new form, hoping that our revered ride will breathe new life in 2019. We expect a state-of-the-art experience, combining projection mapping with animatronics to create an all-new immersive feeling of the Jurassic franchise. 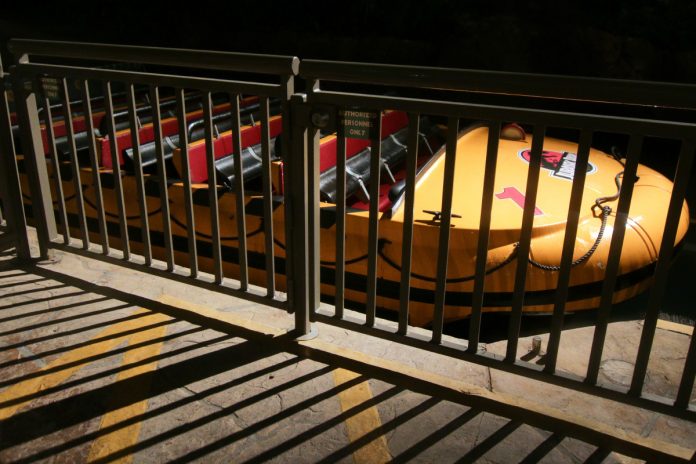 With Jurassic World: Fallen Kingdom coming to theaters over the Summer, Universal created a special event to celebrate the 25th anniversary of the original Jurassic Park film. Tying this promotion within the theme park allowed for a summer full of Jurassic excitement, with select appearances with cast and crew of the franchise. While not all of the film cast were present for each night of the event, fans were able to see Jeff Goldblum, Laura Dern, Frank Marshall, Phil Tippett, and Colin Trevorrow on stage; while Arianna Richards and other stars visited during the day with normal guests. Fans were also able to attend a private screening of Jurassic Park in CityWalk and were treated to the opening 10 minutes of Jurassic World: Fallen Kingdom before the film was released in theaters.

In the Lower Lot, the all-new “Blue” Raptor Encounter puppet was presented, along with a mini-action show. All attendees were offered the ability to dress as their favorite character in the series and check out all of the new promotional material being released for consumers in conjunction with the new film

Most notably, fans were also given a chance to ride Jurassic Park: The Ride one last time before its Jurassic World conversion. Actual props from all 5 films were pulled from the Prop Warehouse and placed on display within the queue of the ride; with some of the items being seen by the public for the very first time.

Universal has hosted similar, larger events like this in Orlando, especially with the Harry Potter franchise. It would be nice to see Universal Studios Hollywood continue this momentum with special events based upon other franchises within their park. While this was a special ticketed event, the opportunity was a once-in-a-lifetime for many and very much welcomed by this community.

Universal Studios Hollywood is back open!

REVIEW: The Secret Life of Pets: Off the Leash! at Universal Studios Hollywood