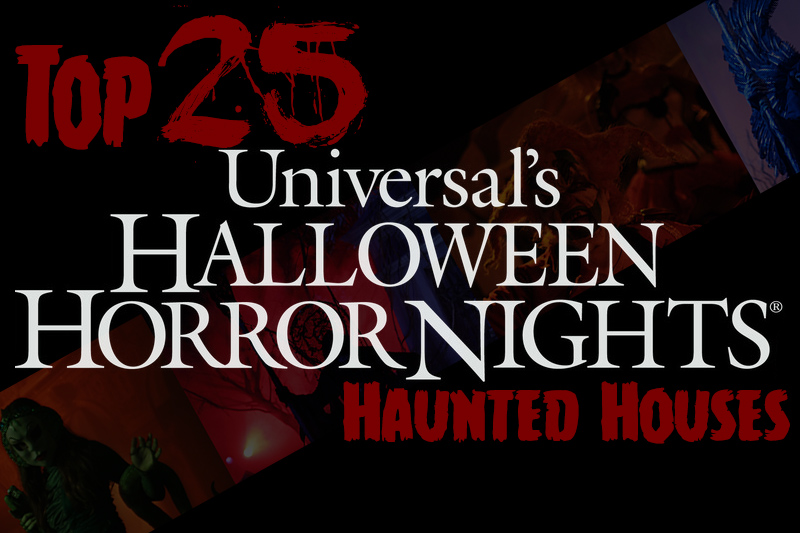 Brian: Another great house from HHN 14. First off, the queue video set the stage perfectly. Secondly, the sets and use of scares were fantastic. The vampires were scary and that finale was just nuts. Of course, we have to mention that bedroom scene, where the girl is having a rather pleasurable experience. Did not expect to experience that during the walk-through.

Drew: Why are all these awesome houses from before my time? I’ve been through a Vampyr house. BLOOD BATH. Yeah. I can’t hold that mess against the original, though. Loved reading about it.. one of the houses that made me feel like I had to face my fears and take a trip to Halloween Horror Nights.

Hate: My all-time favorite HHN House, this thing delivered each and every visit and incorporated some new (at the time) scare tactics that have evolved from this house. We can all appreciate the bedroom scene but beyond that this was the first house I can remember utilizing 2 floors and numerous bungie scares. I still remember the first time a Vampire flew over my head in the library; talk about badass. Also, to this day one of the greatest scenes ever was this houses finale with bungie vampires flying into the windows and then disappearing into the night. Just a truly scary, well executed, highly themed, non stop thrill ride of a house.

Brian: In my opinion, the best icon house ever, Screamhouse is the house that ushered in a new era of Horror Nights. From the breathtaking facade, to the set designs; everything about this house was just A+. From the smell of rotting flesh, to maneuvering through hanging body bags, this house was just as macabre as one can get. Even though it’s been 12 years since I’ve experienced it, I can still remember walking through the queue hearing the Caretaker whisper “Eenie, Meenie, Miney, Moe”. What sets this apart from some of the other houses though was the creation of the urban legend of Cindy, the Caretaker’s daughter. Cindy was an abandoned idea, but the fan base was so strong with the house, we’ve seen several sequels including the debut of Cindy.

Drew: The house that really started it all. The total game changer for Horror Nights. Sadly, AGAIN, I’ve never had the pleasure of actually walking through this house. As someone who’s watched the Art of Scare documentary a bazillion times, I can tell you I understand the impact this house had. Sadly I’ve missed all reiterations of it as well. Horror Nights 25?

Hate: This was really the house that elevated the level of expectation of houses at HHN. The level of detail that was reached in this house was like nothing seen before. The facade itself could stand up to any facades we see today, let alone those of a decade ago. The house delivered scares and great theming as expected, but also included one of the greatest icons of all time, the Caretaker. How about that mirror trick finale? Since Screamhouse, we’ve seen it played over and over again in different houses over the years; but none of them were as executed as perfectly as the Caretaker finale in Screamhouse.

Brian: What sets this house apart from others is that it featured a great story, wonderful set designs, and an intense cast that were relentless every night. As a lover of history, I enjoyed that Horror Nights drew inspiration from the Vlad the Impaler instead of the traditional “Bela Lugosi” archetype. When it comes to the scares, it’s as if Universal took everything that made Vampyr successful and amped it up to the max. And those Feral Brides, just vicious!

Drew: Typically, one walk through a house and I learn the in’s and out’s and very rarely get scared anymore. NOT the case with Dracula. This house scared the absolute CRAP out of me. The intensity of this house may be unrivaled at Halloween Horror Nights, in my opinion. From start to finish, everywhere and anywhere, scare actors made their presence known. Absolutely unreal house from the second you walk into the soundstage to the second that you finally catch your breath afterwards.

Hate: Damn Dracula, you scary! To this day, I feel Dracula is the scariest house HHN has ever done. Nevermind the amazing sets, progression of Dracula’s character, or even the sexy brides. This house was a high energy scare fest, hell-bent on making you piss yourself. From the castle grounds to the catacombs it really just didn’t let up and it seemed the further you went the scarier it got. My favorite aspect of the house though was seeing the transformation of Dracula from human-like to bat-like at the end. Just a crazy ass house!

#2. An American Werewolf in London

Brian: A perfect recreation from one of my favorite movies; the house isn’t a success without the believability of the Werewolf puppets, and those things were scary as all hell. I’m not a man that gets scared, but seeing those puppets in action for the first time put a lump in my throat.

Drew: What’s there to say about An American Werewolf in London? This house had it all. A strong story (great property), amazing details, incredible facade and of course… puppets. I’ve been through many houses themed to movies, but absolutely none nailed it quite like Werewolf. It’s as if you walked through from start to finish. The puppets.. jaw dropping. Nothing like seeing them for the first time in person. I could gush over this house for hours. Just amazing.

Hate: Seriously who didn’t love this house? Do I need to make a case for it? It deserves to be in everyone’s all time top 5 no matter how long you’ve been going! Its so good I seriously contemplated buying a plane ticket to Hollywood to experience it one more time.

Brian: As a fan of the film, I didn’t quite expect The Thing to be so intense. It recaptured everything I loved about the movie and just threw it in my face with the great sets and puppets. One could argue that The Thing’s success with it’s puppets paved the way for Horror Nights to attempt An American Werewolf in London. Horror Nights 17 was truly a benchmark year for houses, and this one easily surpassed each one of them. To be fair, the case can be made for most of our Top 5 to be number one, but you’ll hear a lot of people have The Thing right at the top spot.

Drew: Story time. Horror Nights 17 was my first year attending. Nightmare on Elm Street was my first house. I loved the event as a whole. I had done all the other houses before doing the Thing. So we made our way on the hike back to the Tent… and we noticed no one else was with us. We get to the entrance… and there was no line. My buddy and I.. Horror Nights virgins.. were faced with the task of walking through one of the most intense houses ever created.. alone. This house was NUTS. The puppetry, while not as advanced as Werewolf… was at the time, incredible. The actors.. on point. The gunshot sounds.. deafening. There was a true sense of danger as we walked through. I actually RAN for the door when I saw the exit. That’s when I knew what Halloween Horror Nights was all about.

Hate: This was another house that literally scared the crap out of me! The Thing was probably one of the most intense houses I’ve ever been through and raised the bar on what could not just be achieved in a tent house but in haunted houses in general. Everything from the ongoing battle to the eerie scenes with wicked puppets the house was an over the top experience that delivered in every category.

Like it or hate our choices? Make sure to discuss it on our forums or find us on Twitter @Orlando_United.