Another decade of Universal is about to end, closing the chapter on, probably, the most important chapter of Universal Orlando’s growth. Since 2010, Universal has opened 2 Wizarding Worlds, a new water park, added thousands of rooms across 4 new hotels, renovated CityWalk, and much, much more. As we look into the future, all eyes are set on the new theme park down the road.

In the meantime, 2019 was still a pretty big year for the Resort – offering a set of memorable moments that offer a fitting end chapter to the past 10 years. 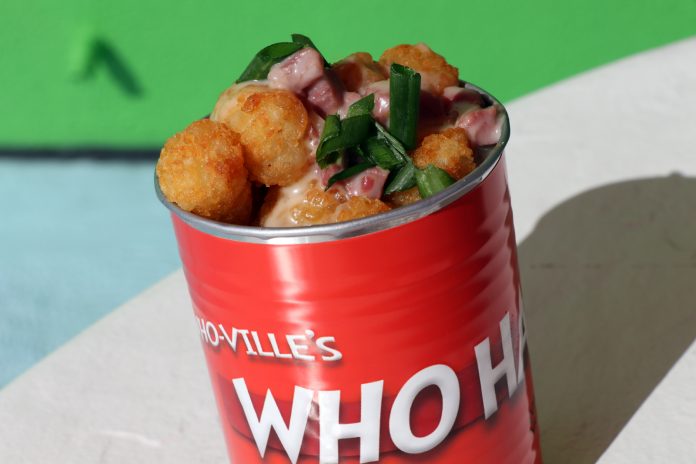 Universal introduced a lot of new food options in 2019, including revamping the Monsters Cafe menu and opening the Today Cafe; but the big one was when, out of nowhere, Universal surprised everyone and reopened the Green Eggs and Ham Cafe at Seuss Landing in December – with a new menu to boot. Originally serving sandwiches and chicken fingers, the new menu boasts a variety of different tater tot plates – including our new favorite, Buffalo Chicken Tater Tots.

Other options include Pizza Tots, Green Eggs and Ham Tots, and Who-Hash – served in its own E-Ticket serving can.

We’re still not quite sure if the Cafe plans on staying open after the busy season subsides, but were hoping so; to help satiate our Buffalo Chicken Tot fix. 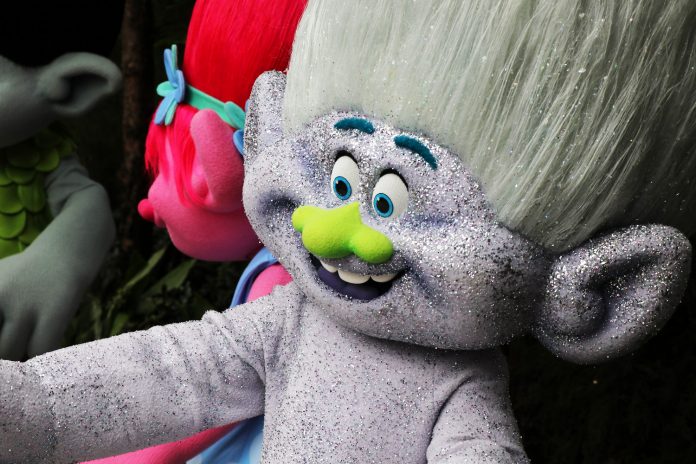 The Meet & Greet that took the internet by storm! Universal introduced Guy Diamond to the Trolls Meet & Greet in February. Of course, what separates Guy Diamond from other meet & greet characters is his sparkly flatulent ability. In layman’s terms, he farts glitter.

While other characters were added this year, including the awesome She-Ra, nothing captivated fans quite like Guy. Guests came out in droves to see the troll do his glitter thing, with several videos going viral. While Guy definitely had a lot of fans, there were a few who came away less than impressed by his twinkly toots. Admittedly, fart jokes can be crude – but this is one instance where the sophomoric humor works. 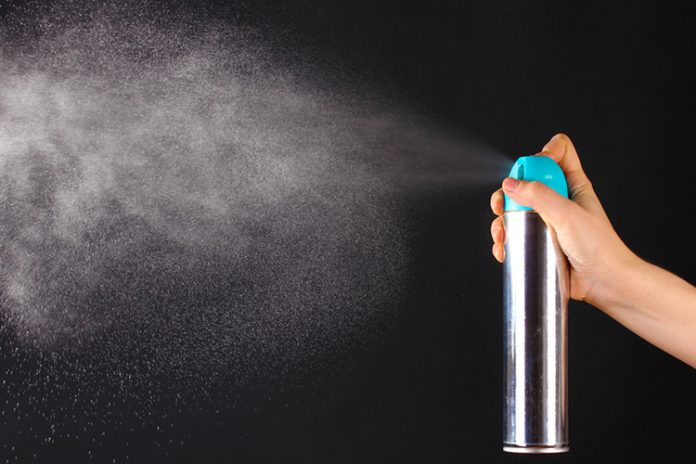 What better way to follow up a farting troll…

Yes, this year, Universal found a new way to mask those dastardly, foul smells in their bathrooms at Islands of Adventure by introducing themed smells.

In March, Universal added a new air freshening system in the major Islands of Adventure restrooms, featuring distinctive scents for each island. For example, the whimsy of Seuss Landing is represented by a cotton candy scent, or the adventure that is Jurassic Park features a woodsy musk. In addition, the scents will change with the seasons. You may experience Iced Piña Colada in Port of Entry over the hot Florida Summer, or a delightful Gingerbread scent for the holidays.

So far, it seems the change has only been made at Islands of Adventure. We anticipate that it is only a matter of time before it makes its way over to Studios (and, eventually, our 2020 Top 10 List). 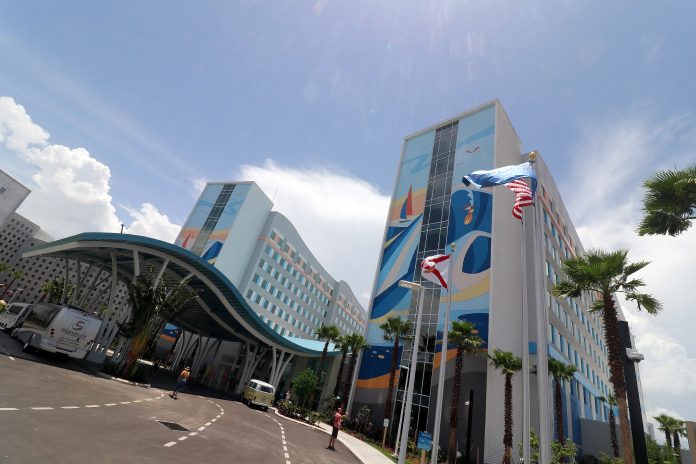 With Surfside opening, it brings the total of Universal resort rooms to 7,000. The number will grow by 2,000 when the adjacent Dockside Inn and Suites opens next year.

Universal is touting Endless Summer Resort as one of the most affordable resorts on property, and if you’re looking to get all the goodies that staying on-site offers while not breaking the bank, Surfside Inn & Suites is definitely something you may want to consider booking. 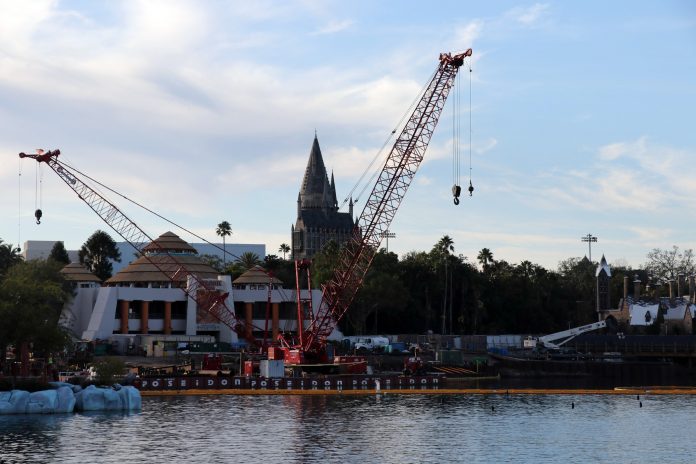 6. The Beginning of Jurassic Park’s Transformation

Jurassic Park has gone through some pretty drastic changes since construction on a new project started in January, becoming barely recognizable. As construction continued, the infamous Visitor Center waterfront saw its once lush foliage become a vision massive mounds of dirt and construction cranes. While we still don’t know what to expect, here’s what we do know:

The recent addition of footers confirms this will most likely be a coaster, but other than that, we are in the dark. We’re still unsure of the scope of the project as well. Is this the beginning of the transformation into Jurassic World or are they just updating the look but not the name?

To accommodate the construction, the layout of Jurassic Park has been changed – with Raptor Encounter moving to a temporary location, and the Carnival Games moving near the Visitor Center. Even Popeye and Bluto’s Bilge Rat Barges closed for 3 months due to work on the new project. We’re crossing fingers that Universal announces something about the project soon! 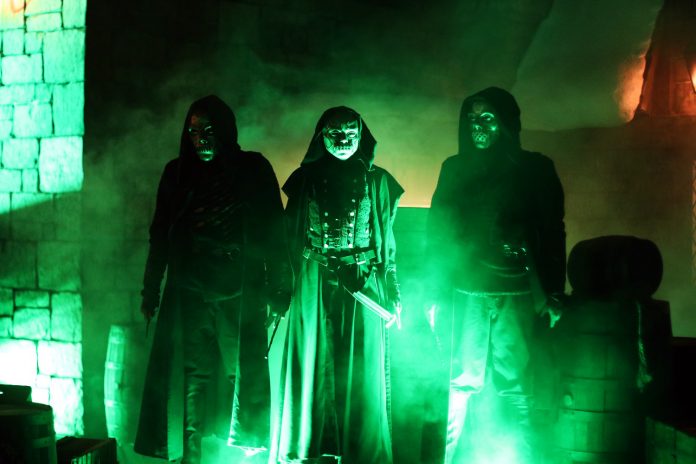 One of the most awesome additions that Universal added this year was also sort of a letdown. Don’t get us wrong, we love the Dark Arts, but the missing Patronus finale that we saw debut in Hollywood was definitely a huge bummer.

BUT – it isn’t all bad when you consider we finally got Death Eaters in Hogsmeade!

It was the great counterbalance for the Halloween season, too; offering something unique in Islands while the monster that is Horror Nights was taking place next door at Studios.

Still, while the projection show was great – the missing Patronus drones do put a bit of a damper on the Dark Arts package, and why it comes in at #5. 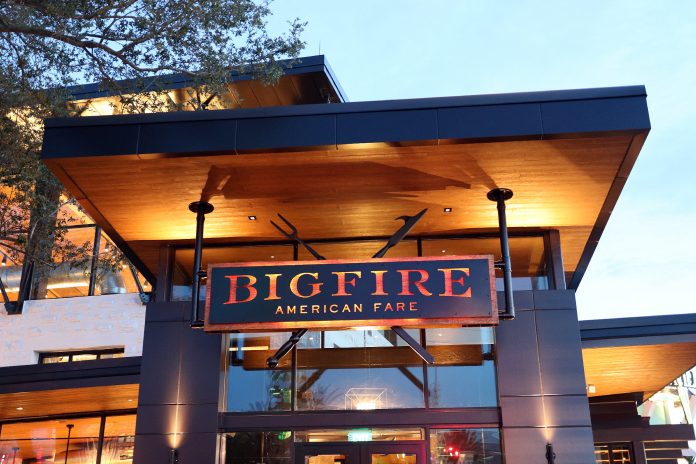 The restaurant opened in June and has been received very positively by the community. The menu is a bit different than what CityWalk typically offers. While it has burgers and steaks, it does feature a lot more game meats and unique dishes – extending beyond what I would call a “traditional menu”; which helps Bigfire stand out in the CityWalk lineup.

On a personal note, I’m a big fan of bourbon – and Bigfire features some pretty great variations of Old Fashioneds, including the Smoky, Smoky Maple that offers some fancy bartending tricks and pours. Not many theme park restaurants offer Pappy Van Winkle, either. For beer lovers, they also offer their own brew – Bigfire Smoked Amber, which as the name implies, features smoky notes.

Also – Tableside S’Mores. That is all.

Replacing Emeril’s was no easy task, but we feel Bigfire more than lived up as its replacement. 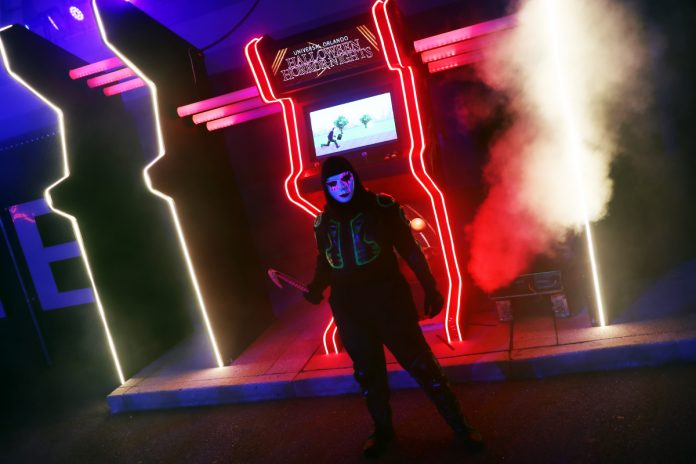 Many consider Halloween Horror Nights 28 to be one of the greatest years put on by the Resort, so following up with Halloween Horror Nights 29 was always going to be a challenge. On paper, the event featured some heavy hitters – boasting some of the most popular I.P.’s of the past and present; including Stranger Things, Ghostbusters, and Us. However, some things didn’t land as well as we hoped. Regardless, it was still a strong year – it was just tough to escape the shadow of 28’s overwhelming success.

Without a doubt, the star of this year’s event was Halloween Marathon of Mayhem. We seriously can’t say enough great things about the show. Not only did we feel it was one of the best shows Universal ever created, but one of the best night shows in Orlando. Other positives from 29 include Universal Monsters and Yeti: Terror of the Yukon, which was our favorite house of the year; and Rob Zombie Hellbilly Deluxe, our favorite zone.

Universal also went all-in with the 80’s theme, and created some awesome merchandise that caused a lot of fans to possibly go broke. The event even found its way outside the arches, as a Stranger Things photo-op was exclusively available for guests staying on-site.

The Academy of Villains continued to establish themselves as an important part of the Horror Nights community, while also offering up a highly-entertaining show.

With Horror Nights 30 now on the way, the road to the Halloween season should be exciting one…

They finally did it!

After years of playing it close to the chest, Universal shared its first details of their upcoming expansion and gave us the name of their new park – Universal’s Epic Universe.

With close 570 acres of empty land, Universal’s Epic Universe expansion is roughly the same size as their current Resort property and will be Universal’s biggest investment since expanding the Studios into Universal Orlando in the late ’90s.

Since people will surely ask: Shouldn’t a new theme park announcement be #1? We feel since we knew a theme park was coming, and details are still tight-lipped, it didn’t seem right to just default it to the top spot.

Recently, Universal overcame a major hurdle with the project with the Kirkman Road Extension, which recently passed after an Orange County Board of County Commissioners vote. This is a 50/50 public-private partnership in which Universal is investing $160 million to extend Kirkman into the area where the new park will be located.

Details are still unknown, but it’s set to be an exciting time to be a theme park fan. 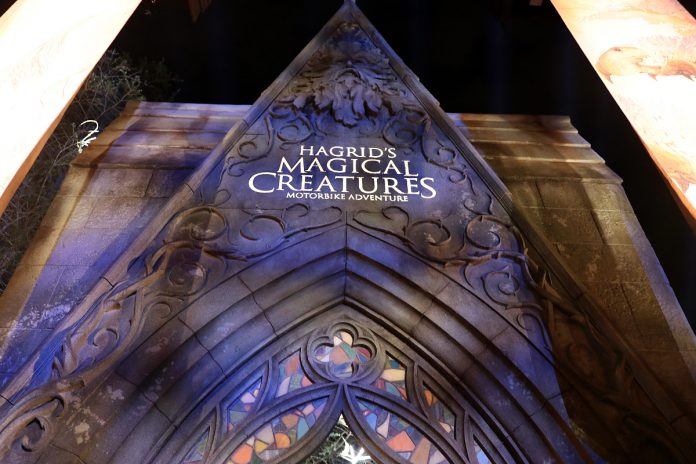 To say the opening year of Hagrid’s Magical Creature Motorbike Adventure was an eventful one would be an understatement.

From an attraction standpoint, it has easily become one of the top rides in Orlando. As we stated in our review, it has the thrills for thrillseekers but also has the ability to tell a story that traditional coasters can’t do – and that’s what so wonderful about this ride. If we strip it down to the core of just being a roller coaster, it’s a pretty thrilling experience. It’s when we add the extra layers – the themeing, the story, the animatronics; it truly makes this ride a unique attraction.

The drama comes from everything else, as the ride battled downtimes and other various issues since opening day. Day 1 of the attraction saw 10-hour waits, due to a mix of demand, reduced capacity, and downtime. A wetter-than-normal Summer also didn’t help an outdoor attraction maintain uptimes. Throughout the Summer and into the Fall, the ride was still working on the kinks – even having to close for a couple of days due to bees.

Hagrid’s was able to survive all the headaches due to overwhelming acclaim. With all the issues the ride faced, a majority of the riders came off the ride with nothing but praise.

The ride seems to be running pretty well now, with a majority of the trains running on track, increasing capacity.